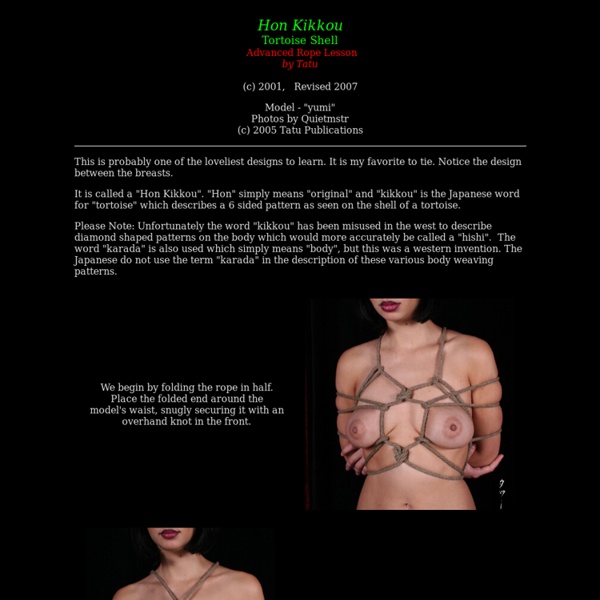 Hon Kikkou Tortoise Shell Advanced Rope Lesson by Tatu (c) 2001, Revised 2007 Model - "yumi" Photos by Quietmstr (c) 2005 Tatu Publications This is probably one of the loveliest designs to learn. It is my favorite to tie. Notice the design between the breasts. It is called a "Hon Kikkou". Please Note: Unfortunately the word "kikkou" has been misused in the west to describe diamond shaped patterns on the body which would more accurately be called a "hishi". All content & design © 1995-2020, TPPI and its affiliates and assigns and licensors, unless otherwise noted. "DsARts", "The Academy of DsARts", "Academy of D/s Arts, Japanese Rope ARt, and "The ARt of Geisha", "The Geisha Files", "The Way of Rope" are copyright titles, logos and signatures of TPPI. Unauthorized use is a willful infringement upon my rights under 17 U.S.C. All Models are at least 21 years old.

Kinbaku / Shibari Terms by Tatu Return to Home | Tutorials Glossary Terms Related to Japanese Shibari / Kinbaku / Bondage Compiled by Tatu (c) 1999 / 2005 Please Note: I began compiling this glossary in August 1999 in an effort to first gain understanding of the Shibari / Kinbaku world for myself and also share what I have learned to the west. At the time as far as I know beyond a handful of terms defined in a few other websites, this was the first attempt to provide a major glossary of Japanese Shibari / Kinbaku terms in the west. It has undergone several major revisions.

Hon Kikkou Hon Kikkou As I understand it, "Hon Kikkou" translates as "The Official Tortoise Shell". This is an attractive and rare tie that I ran across on the Angle Rope website years ago. I have not seen it anywhere since and thought I would add it to my site so that it is not lost to the community. Bondage 101: Two-Column Weave This tutorial describes an easy and versatile two-column tie. A two-column tie is any tie that ties two parallel things together, such as two arms, or two legs, or an arm to a leg, or a leg to a post, or whatever. This particular two-column tie is very fast and simple, looks gorgeous, and requires no knots. While it looks complicated, this is actually a very easy tie to learn. You can learn to do it in about five minutes, and it only takes a minute or two to put on. As you can see, the finished result is quite lovely.

Crash Restraint When attaching support lines to a harness for suspension, I use a novel method that people frequently ask me about, and I've been meaning to document for a long time. Serendipitously, I ran into Kali from Kink Academy a few months ago at Wicked Grounds, and she asked me to film some instructional videos for them on suspension -- so I managed to slip this in there, and they've graciously agreed to allow me to use screenshots from those videos to illustrate a blog post here. This method was inspired by the Tatu hitch , during a Fetlife discussion whose details are now murky in my memory -- in any case credit is due both Tatu and Jack Elfrink for making me aware of that knot, upon which this is based. Things needing names, and this technique using the first half of a Tatu hitch, I suppose we could call it the half-Tatu hitch. Thanks also to Mecha-Kate for modeling for these.

Karada Karada (Full Body) A classic tie that is attractive and a great anchor for additional layers and ties. Its diamond patterns and tight lacing is lovely and stimulating for both parties. Level: IntermediateType: TieTime: 15-20Length: 30'(10m)Style: JapaneseGoal: Attractive 1.This tie runs from the shoulders all the way to the ankles. It will pretty much "mermaid" or Mrs Adams" your partner. How to not be creepy. My name is Holly Pervocracy, and I used to be a creep. Not the worst kind of creep; I was certainly never dangerous, and it wasn't to the point where I drove everyone away, but I was definitely called creepy a few times. And given the side-eye-while-edging-away a few more times. I had a strong and unusual sex drive, a tendency to be attracted to pretty much everyone I was friends with and a lot of people I wasn't, and didn't know how to express these appropriately. I made jokes that weren't jokes about "ha ha, we should totally make out right now, wouldn't that be hilarious," I shared my fetishes too loudly and way too publicly, and I expressed attraction by puppydogging my crushes pathetically.

Lewbari Hip Harness Permalink: Codes: Rope Suspension Models: Mick Luvbight This is Mick Luvbight's variant of Lew Rubens' Lewbari™ Hip Harness. Note that Lewbari is a trademark of Lew Rubens, and is used with permission. KinkyClover » Rope Space – Programmed Preconceptions Rope Space – Programmed Preconceptions Rope at the moment seems to be the new black. This is a wonderful thing. There are events popping up all over the country, most recently we have one in Nottingham, all these places for rope enthusiasts to get their kink on.

KinkyClover » Nerve and Circulation Problems Nerve and Circulation Problems I think the two most common and often misunderstood problems in rope are circulation and nerve problems and more importantly how to spot the differences between them. It is not always simple, but here are a few points to guide towards what the problem could be. Vector Forces Vector forces become apparent whenever there is an internal angle greater than 0° between two or more rigging components or anchorage points. For ease of explanation, a vector force is typically trying to pull horizontally as well as vertically. This has a multiplying effect on the loads that are felt at the anchor points and likewise the tension exerted within the rigging equipment, be it ropes, slings, strops or chains. The effects of vector forces must always be taken into account when undertaking rigging tasks to ensure that these forces do not exceed the safe working load capacity of the equipment, components and anchor devices used within the system. Force is an influence that has both magnitude and direction, it is usually given in the dynamic unit of Newtons (N).

Diamond Chest Harness Permalink: Codes: Rope Suspension The Diamond Chest Harness Mick developed the Diamond Chest Harness as an alternative to the standard horizontally wrapped harness. It seems that Dee's sternum is shorter than average, so the bottom wrap on a standard harness can make breathing uncomfortable for her. By cross the rope bands between the breasts, the center of support is moved upwards onto her sternum, making this more comfortable (other women besides Dee had found this helpful in suspension, also). Nerve and Circulation Problems I think the two most common and often misunderstood problems in rope are circulation and nerve problems and more importantly how to spot the differences between them. It is not always simple, but here are a few points to guide towards what the problem could be. I am not a medical professional, everything written here is my opinion or given to me by medical professionals regarding my own injuries. If you have an injury my best advice is to seek medical advice for your injury.