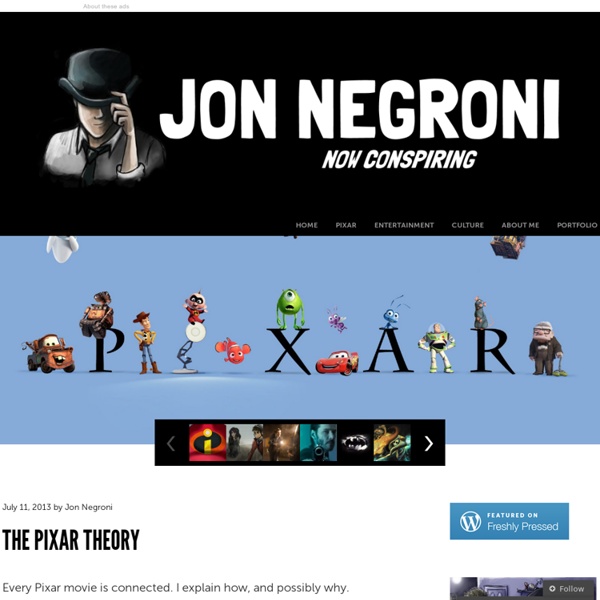 Every Pixar movie is connected. I explain how, and possibly why. Several months ago, I watched a fun-filled video on Cracked.com that introduced the idea (at least to me) that all of the Pixar movies actually exist within the same universe. Since then, I’ve obsessed over this concept, working to complete what I call “The Pixar Theory,” a working narrative that ties all of the Pixar movies into one cohesive timeline with a main theme. This theory covers every Pixar production since Toy Story. That includes: A Bug’s LifeToy Story 2Monsters Inc.Finding NemoThe IncrediblesCarsRatatouilleWall-EUpToy Story 3Cars 2BraveMonsters University The point of this theory is to have fun and exercise your imagination while simultaneously finding interesting connections between these fantastic movies. [SIDE NOTE: All text in blue indicates updated edits since the original version] You can read the full theory below, or watch this summarized video that was made and narrated by Bloop Media. Or does he? Mr.

You Think You Know Animals… Til You See Them Under An X-Ray. The Penguin Shocked Me. - Viral Tales If you own a pet, you’re probably very comfortable with them. Your dog, cat, rabbit or snake is most likely named something like “Fluffy” or “Captain Hammer.” You’re comfortable with Captain Hammer, in fact, you could pick him out of a lineup. But what if I told you that perhaps you don’t know your beloved pet as well as you think you do? Just check out these pictures. The Hills Have Eyes (1977 film) The Hills Have Eyes is a 1977 American exploitation - horror film directed by Wes Craven and starring Susan Lanier , Michael Berryman and Dee Wallace . It is about a family on a road trip stranded in the Nevada desert who become hunted by a clan of deformed cannibals in the surrounding hills. The film was released in cinemas on 22 July 1977, and has since become a cult classic . Plot [ edit ]

Over 500 Social Change Documentaries on 1 Page Just imagine what could become possible if an entire city had seen just one of the documentaries above. Just imagine what would be possible if everyone in the country was aware of how unhealthy the mainstream media was for our future and started turning to independent sources in droves. Creating a better world really does start with an informed citizenry, and there's lots of subject matter to cover.

166 Documentaries To Expand Your Consciousness By: Higher Perspective Here is a list of over 100 documentaries you can watch for free online. They are about Science, Consciousness, ETs, you name it. It’s a smorgasbord of fascinating subjects to learn about. 27 Mind Blowing Facts They Didn’t Teach You At School Growing up I never really “enjoyed” school. It wasn’t that I was too dumb, it’s just that I couldn’t be bothered. It was too boring. I would daze out in the middle of class and not really listen to what was being said. However, if the class was interesting (very rarely) I couldn’t be more eager to learn. So welcome to class , everyone.

Cyber Seduction: His Secret Life Plot[edit] Justin Petersen is a popular 16-year-old high school student and a successful swimmer with a steady girlfriend, Amy. Justin's coach announces that Justin has made the All-State team, which pleases his parents, particularly his mother Diane, who used to swim as well. Justin is introduced to internet pornography when a friend sends him a link to a softcore featuring Monica, a fellow student who has a crush on him. Captivated, Justin is then exposed to a porn film at a party, and later browses more explicit pornographic websites, only to be caught by his mother. It is easy for Diane to be aware of her son's behavior, as Justin does little to make his activities clandestine.

'The End of the Whole Mess' by Stephen KingStephen King needs no introduction. He is the award-winning, best-selling author of novels such as Carrie and the post-apocalyptic masterpiece The Stand. Although he is most well-known for his novels and the movies they’ve inspired, he is a prolific author of short fiction as well, having written enough of it to warrant several collections including: Everything’s Eventual, Night Shift, Skeleton Crew, and Nightmares & Dreamscapes. “The End of the Whole Mess,” appeared in the latter volume, but was originally published in Omni magazine in 1986. It was nominated for the World Fantasy Award, and was recently adapted into a one-hour movie as part of a TNT Nightmares & Dreamscapes miniseries.

Cod inspire potentially life-saving cold storage tech for human blood Polymers similar to the proteins found in this Arctic cod could dramatically improve the cryogenic storage of blood How is it possible that cold-blooded fish such as cod can live in Arctic waters without just freezing solid? As it turns out, they've got proteins in their bloodstream that act as a sort of antifreeze. British scientists have now copied the fashion in which those proteins work, to create a process by which donated human blood could be frozen for storage, then quickly made available for transfusion. Although it is already possible to store blood cryogenically, it requires the addition of an organic solvent in as high as a 1:1 ratio, before the freezing occurs.

The Black Cauldron (film) The Black Cauldron is a 1985 American animated dark fantasy-adventure film produced by Walt Disney Feature Animation. The 25th film in the Walt Disney Animated Classics, it is loosely based on the first two books in The Chronicles of Prydain by Lloyd Alexander, a series of five novels which in turn is based on Welsh mythology. It is also known as Taran and the Magic Cauldron. Taran follows them to the Horned King's stronghold and acquires the small, pestering companion Gurgi along the way. How to Change Your Life: A User’s Guide ‘You will never change your life until you change something you do daily.’ ~Mike Murdock By Leo Babauta Start with a simple statement: what do you want to be? Are you hoping to someday be a writer, a musician, a designer, a programmer, a polyglot, a carpenter, a manga artist, an entrepreneur, an expert at something? How do you get there?