Is Disney is Really Ruining Her Kid? A Neuroscience Perspective. I noticed changes in my kids too. 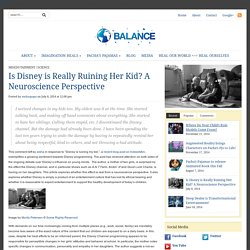 My oldest was 8 at the time. She started talking back, and making off hand comments about everything. She started to hate her siblings. Calling them stupid, etc. I discontinued the Disney channel. This comment left by aisha in response to “Disney is ruining my kid,”- a recent blog post on IndeedIAm, exemplifies a growing sentiment towards Disney programming. Image by Moritz Petersen © Some Rights Reserved With demands on our time increasingly coming from multiple places (e.g., work, social, family) we inevitably become less aware of the exact nature of the content that our children are exposed to on a daily basis.

An obvious question to ask is: why did this mom trust Disney’s programming in the first place? What others are saying While a subset of responses (21%) seemed to acknowledge some changes, they were less certain about how impactful these changes actually are. A Neuroscience Perspective To Disney or Not [i] [ii] How Disney Magic and the Corporate Media Shape Youth Identity in the Digital Age. While the "empire of consumption" has been around for a long time[1], American society in the last 30 years has undergone a sea change in the daily lives of children - one marked by a major transition from a culture of innocence and social protection, however imperfect, to a culture of commodification. 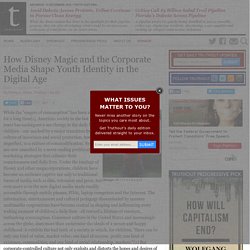 Youth are now assaulted by a never-ending proliferation of marketing strategies that colonize their consciousness and daily lives. Under the tutelage of Disney and other megacorporations, children have become an audience captive not only to traditional forms of media such as film, television and print, but even more so to the new digital media made readily accessible through mobile phones, PDAs, laptop computers and the Internet. The information, entertainment and cultural pedagogy disseminated by massive multimedia corporations have become central in shaping and influencing every waking moment of children's daily lives - all toward a lifetime of constant, unthinking consumption. 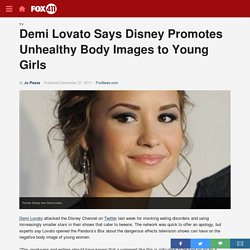 Demi Lovato attacked the Disney Channel on Twitter last week for mocking eating disorders and using increasingly smaller stars in their shows that cater to tweens. The network was quick to offer an apology, but experts say Lovato opened the Pandora’s Box about the dangerous effects television shows can have on the negative body image of young women.

“The producers and writers should have known that a comment like this is ridiculous to be said on air by a character on any program targeted at teens,” nutritionist Rania Batayneh tells Fox411.com. Lovato’s beef was with a joke made about eating disorders on the show “Shake it Up.” One of the show’s characters joked: "I could just eat you up, well, if I ate. " "It is not a notable character trait to ‘not eat,'" Batayneh said. After watching the offensive episode, the “Skyscraper” singer and actress, who has been very public about her own struggles with eating issues, tweeted: “What are we promoting here? Psychological Effect of Children's Movies. Child Psychology - Children’s films leave a pronounced footprint today on the personalities and development of a child’s emotional, cognitive, and social development. 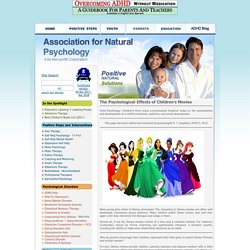 This page has been edited and reviewed by psychologist R. Y. Langham, M.M.F.T., Ph.D. Many young girls relate to Disney princesses. The characters in Disney movies are often well-developed - impressing young admirers. Almost all, if not all, Disney movies consist of a hero and a romantic fantasy. Why do parents allow or encourage their children, especially their little girls to watch these movies? For one, Disney movies provide children, parents, teachers and daycare workers with a little breathing space. Walt Disney Expert Uses Science to Draw Boy Viewers. Television, Commercials, and Your Child. What_children_watch.pdf. Stereotypes in Disney. Most people can thank Disney for happy childhood memories, favorite fairy tales and charming characters. 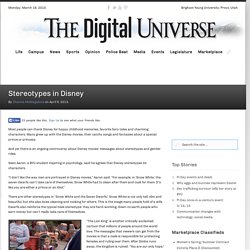 Many grew up with the Disney movies, their catchy songs and fantasies about a special prince or princess. And yet there is an ongoing controversy about Disney movies’ messages about stereotypes and gender roles. Sean Aaron, a BYU student majoring in psychology, said he agrees that Disney stereotypes its characters. “I don’t like the way men are portrayed in Disney movies,” Aaron said. “For example, in ‘Snow White,’ the seven dwarfs can’t take care of themselves; Snow White had to clean after them and cook for them. There are other stereotypes in “Snow White and the Seven Dwarfs.”

Eleanor Anderson is having fun in the Disneyland with her parents. “The Lion King” is another critically acclaimed cartoon that millions of people around the world love. Lydia Moore, a dietetics student at BYU, said she believes Disney stereotypes don’t have much of an affect on children. Smith_thesis.pdf. Susana%20Lopez%20Perez.pdf. A anlise do adolescente jurenice picado alvares 1. Adolescência no Mundo Disney - Ana Luísa Almeida, 2013.