We loved this story about this gorgeous nurse cat. – MyFascinating. @HipHipVale @MarionSpekker @habibisilvia @pure_p4 @ranasilvia63 @pintsize73 @nieuwemarlean Good morning. Max relax Saturday RT@Nature_PlCTURES. Merry Christmas, Mummy by Thomas77 .... Seven Billion Dreams. □□□⛄□□□ @CeciliaEgan1 □□□ Lake Louise .....Canada.□ ..by Nazmul Islam .... "When I look into the eyes of an animal I do not see an animal. I see a living being. I see a friend. I feel a soul" Enjoy your day □❄□❄□ @helwatweets. 19 awkward sex things sex education and movies never prepared us for. Sex is one of those things that, despite being experienced, almost properly grown up people, we’ll never feel like a total expert in. 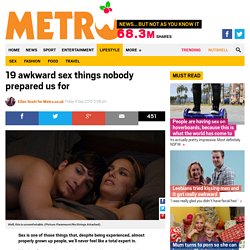 Whether it’s extremely condom-focused sex ed lessons or the filtered, candlelit world of rom-coms, our main sources of sexual expertise seriously let us down when it comes to a few important things. Like dealing with awkwardness. Because that’s what sex is made up of, a lot of the time: weird, uncomfortable, borderline embarrassing moments, that we don’t know how to process. Because NO ONE EVER MENTIONED THEM. Maybe in addition to the hour we spent watching our PE teachers trying to slip a condom on a banana, we could have dedicated a few minutes to covering these things. 1. This is the biggest, most glaring omissions of all sex-related discussions, be it sex ed, glossy mags, or TV and film. No-one discusses the post sex waddle to grab a tissue. No. 2. First off, sex ed never even mentions positions.

Movies are dedicated to standard missionary, always. 3. Philippa Rice's Soppy drawings show the love in everyday moments. With all the #RelationshipGoals chat on social media, it sometimes feels like the only way to be in love is to go out for fancy dinners, have drinks up in the Shard, or send your partner fresh bouquets of flowers they can share on their Instagram. 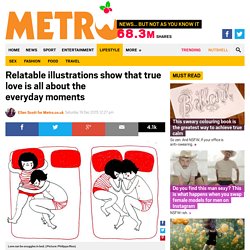 But that’s not what great relationships are really about. Sure, romantic gestures and posh date nights are lovely now and again. But really, true love is about those small, everyday moments. When they bring you a cup of tea, or rub your tummy for you when you’ve eaten too much. Philippa Rice's Soppy drawings show the love in everyday moments. People on Reddit share little things they do to make significant other feel loved. Everlasting love – it’s all about the little things. 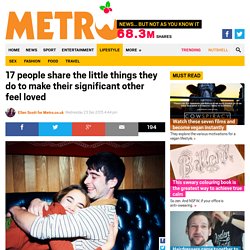 Think of all those cute older couples you obsess over. What makes them so great isn’t a bunch of fancy holidays or dramatic romantic gestures. It’s when one of them gives the other a much-needed shoulder massage, or makes sure they take their vitamins in the morning, or brings them a blanket before they’ve mentioned feeling cold.

If you want to start filling your relationship with little acts of love but need some ideas, – or just want to feel really, really single – read on. Have an awesome day dear friends. Remember to flow...like a river. See you later! □□ Day 271. A colorful night over #Earth. #GoodNight from @space_station #YearInSpace. Dream big. Photography by ©Eamon Gallaghe. Sometimes Together Is Better Than Alone. A Polar Bears International Update on Ursula. A polar bear roams the frozen tundra. 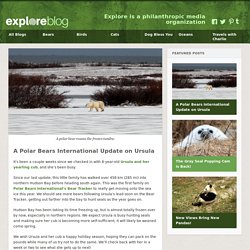 It’s been a couple weeks since we checked in with 8-year-old Ursula and her yearling cub, and she’s been busy. Since our last update, this little family has walked over 458 km (285 mi) into northern Hudson Bay before heading south again. This was the first family on Polar Bears International’s Bear Tracker to really get moving onto the sea ice this year. We should see more bears following Ursula’s lead soon on the Bear Tracker, getting out farther into the bay to hunt seals as the year goes on. Hudson Bay has been taking its time freezing up, but is almost totally frozen over by now, especially in northern regions. We wish Ursula and her cub a happy holiday season, hoping they can pack on the pounds while many of us try not to do the same. EXPLORE The Complete – Polar Bear Live Camera Experience. Here's a @PolarBears tracking update on intrepid Ursula and her cub.

Vancouver Island, Canada. Photography by ©Ignatov. Big Island, Hawaii. Photography by ©Goff Kitsawad. Enjoy time with your loved ones… no matter how different they may be. Photography by ©Kim Abel. Martha Stewart, Lifestyle Mogul. Cause of Choice: Martha Stewart Center for Living at Mount SinaiEarly Catering Gigs: Events at the Metropolitan Museum of Art, MoMA, Cooper Hewitt Museum and Sotheby'sOne Talent She Lacks: Her contribution to the school orchestra amounted to "scratch, squawk, screech. 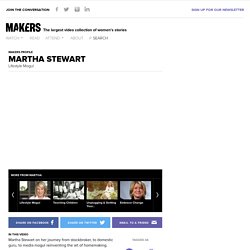 "Advice for Pursuing Dreams: "Go with your gut. If you feel good about an idea, work on it until it works...or it doesn't work. " A true friend is always ready to help, any time. Photography by ©Jeff Wallace. Four bear cubs climb up a tree for safety as an alpha male approaches them. Scene was captured in Finland. Photography by ©Ron W.

Wild Goose Island, Glacier National Park. Tree tunnel - Bruges, Belgium. #travel. The Crimson Forest in Gryfino, Poland. Photography by ©Jonavan Crail. Baby Rhesus Macaque And A Tiger Cub. Photography by ©Fortherock. Nimble's Profile - Vine. Hawaii Sunset. Zelenci, Slovenia. Photography by ©Servee Wijsen. This is a bear and wolf in Finland. The pair meet every evening to share food after a hard day of hunting. Bear and WOLF's unlikely friendship caught on camera by photographer. By Anna Edwards Published: 16:12 BST, 4 October 2013 | Updated: 11:28 BST, 5 October 2013 Both are meant to be isolated hunters that strike fear into everything they meet. 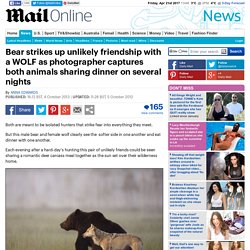 Smell the sea air and catch the first rays of the day over Oahu, Hawaii snap by Pine Butte. How does this chickadee survive Arctic winters? Photography by ©Bragi J. Ingibergsson. Bora Bora from Space. Cute Baby Panda. Photography by ©Fortherock. Beautiful view from Kuliouou Ridge Trail on #Oahu to start off this week. #LetHawaiiHappen.

Aurora Boralis, Finland. Photography by ©Andy Linden. Nap Time. The Queen met Canadian Prime Minister Justin Trudeau for his first visit to Britain today but their historic meeting was somewhat overshadowed by a surprising item in Her Majesty's fireplace. 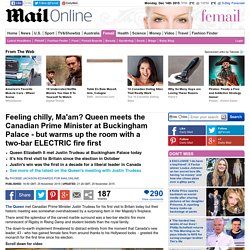 There amid the splendour of the carved marble surround was a two-bar electric fire more reminiscent of Rigsby in Rising Damp and student bedsits than the royal family. The down-to-earth implement threatened to distract entirely from the moment that Canada's new leader, 43 - who has gained female fans from around thanks to his Hollywood looks - greeted the monarch for the first time since his election.

Scroll down for video Queen Elizabeth II welcomed the Canadian prime minister to Buckingham Palace during a private audience but eyes were drawn to the Queen's electric fire that was warming the room behind her The liberal prime minister, whose election earlier this month ended almost a decade of Conservative rule, met with Queen Elizabeth, who is also queen of Canada. Photography by ©Walter Spoor. Baby Mountain Lions. Baby polar bear. Star painted sky over a winter landscape. So Lovely RT @Nieman Marcus - John-Richard Collection First Blush Faux Floral #flowers.

Photography by ©Christina Angquico. Join us for a Turtle Bay #sunset in Hawaii at 5:50 PM HST. Hilo, Hawaii. #hawaii. Looking down on Pearl Harbor, Hawaii. Photography by ©Paul Walkefield. Baby Seal. This Fearless Lion Made The Ultimate Sacrifice For Her Cubs-Fuzzfix. Blog Detail - TigerTime. Cinderella pursued by her Prince Charming? 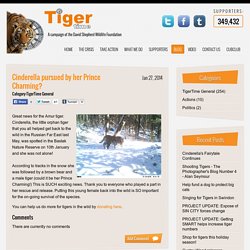 Jan 27, 2014 Category:TigerTime General 0 87Tumblr0 Great news for the Amur tiger. Cinderella, the little orphan tiger that you all helped get back to the wild in the Russian Far East last May, was spotted in the Bastak Nature Reserve on 10th January and she was not alone! Cinderella with two cubs. Blog Detail - TigerTime. Cinderella's Fairytale Continues Dec 9, 2015 Category:TigerTime General 8 180Tumblr0 There aren't many happy stories in conservation but the tale of one Amur tiger has captured our hearts this Christmas. 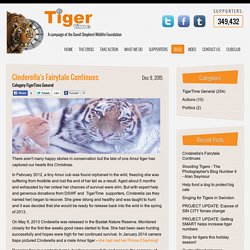 In February 2012, a tiny Amur cub was found orphaned in the wild, freezing she was suffering from frostbite and lost the end of her tail as a result. On May 9, 2013 Cinderella was released in the Bastak Nature Reserve. Roaming free in a protected area, hunting successfully and seen in the company of other tigers, Cinderella's story seemed too good to be true. "This December we received an amazing camera trap photo of Cinderella with two young cubs.