Disney Princesses doing Doctor Who cosplay is the most adorable thing you will see all day. I love Disney, but that's just the biggest gripe I've had with them. 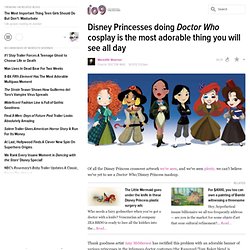 Since Native Americans do not have a concept of royalty, Pocahontas is just the chief's daughter and later married a landowner. Mulan was just a girl who wanted to protect her father and later marries the captain of the Imperial Army...the only way she is close to the Imperial family is that she's their bodyguard. Of course, I wish they didn't shove her into OUAT as there's proof she may have existed for real... How are they going to explain it once actual evidence is found? Oh, right, she fell through a portal...that's what they always go with... BTW, I did see Merida included with a Target giftset of Princess dolls, so maybe they are. Things We Saw Today: Disney Princesses Show Their Age. By Jill Pantozzi | 5:01 pm, March 26th, 2012 Artist Taija Vigilia was asked to depict the Disney Princess according to the year their films were released. 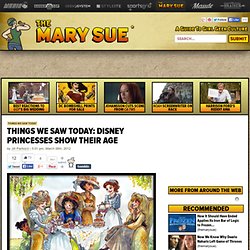 So you’ve got a three-year-old Tiana and Cinderella is 62, etc. (via The Uniblog) There’s an awful racist contingent to The Hunger Games news floating around today. Apparently, some fans are annoyed that Rue was cast with an African-American actor. Han Solo in carbonite as your cell phone case would be cooler if it were 3D but the detail is pretty impressive nonetheless. $14 on Etsy. Wear the Cheese has put some of our favorite 80s characters to the Blechdel Test. Um…I might have to shave my head now. Thank god this didn’t happen at my theater. Punked Out Disney Princesses. Disney Princesses as Punks, Superheros, Goths, High School Girls & Steampunk. It's incredibly cool to see all the different Disney Princess art that we've seen over the years. 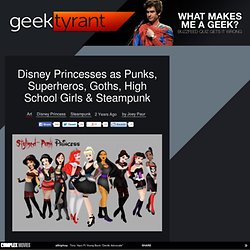 We now have a great new post to add to this ever growing collection. Little Mermaid Surgery Ad Sparks Outrage, Plastic Surgery Clinic Adds Breast Implants To Disney Princess [PHOTOS] The Walking Dead Infects Disney Princesses. August 19th, 2012 by Hazel Chua Warning: Before scrolling down, we recommend that you move to a place where there are no kids (both young and old) nearby, because the consequences and ramifications might be serious. 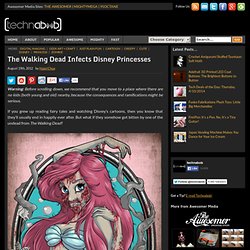 If you grew up reading fairy tales and watching Disney’s cartoons, then you know that they’ll usually end in happily ever after. But what if they somehow got bitten by one of the undead from The Walking Dead? I don’t think the zombies would spare the princesses if Disney ever got hit by a zombie apocalypse. And to show everyone what would become of Ariel, Snow White, and Cinderella, artist extraordinaire Witit Karpkraikaew drew up these eerie images of the undead princesses. As you can see above, the skin is just melting from Ariel’s frame.

Cinderella is the darkest of the three, as she wields an ax and is chewing on her otherwise missing glass slipper for a quick snack. Witit’s DeviantArt page has been hit with comments and requests for more zombie princesses. Disney Princesses Strip Down Into Lingerie. Claire Hummel - SHOOMLAH.COM - print shop — Historical Disney Princesses. THOMAS CZARNECKI Photography. Want to Ruin Your Childhood? Disney Princesses as the 7 Deadly Sins. If you thought Disney cartoons were all talking animals, musical numbers and good winning over evil, think again. 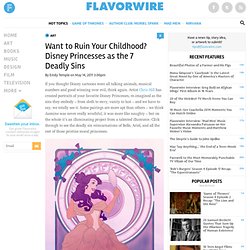 Artist Chris Hill has created portraits of your favorite Disney Princesses, re-imagined as the sins they embody – from sloth to envy, vanity to lust – and we have to say, we totally see it. Some pairings are more apt than others – we think Jasmine was never really wrathful, it was more like naughty – but on the whole it’s an illuminating project from a talented illustrator. Click through to see the deadly sin reincarnations of Belle, Ariel, and all the rest of those pristine moral princesses. [via Creative Greed] Hipster Disney Princesses. Sashiiko Anti. Fashion artist and just nerd - Disney goes fashion.Final by *Sashii-Kami. Gadgets, Gizmos, and Awesome. Yow Yow: Sexy 2012 Disney Princess Pin-Up Calendar. Remember last year's series of sexy Disney princess pinups by artist J. 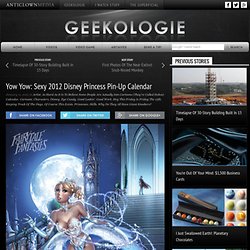 Scott Campbell? Well he's back at it, this time with a full 2012 calendar of scantily clad cartoon ladies. Granted they're not all Disney princesses, but who cares? "I don't even care if they're not all women! " We get it, you're desperate. Hit the jump for a ton more and a link to the artist's website to buy the calendar for $25. J. Thanks to bb, who looks like a fairy but not a slutty one like Tink. Twisted Princess by jeftoon01 on deviantART. Photo-Manipulated Disney Princesses In Real Life. Disney Princesses Like You've Never Seen Them Before. This is going to sound really weird, but I’ve been trying to write a hot Disney princess post for a while now.

Like, I figured with all the cosplay posts we write and art we feature, this one wouldn’t be that difficult, but after one or two, my Google image searching skills failed me, and all I could find were stupid adult Halloween costumes. But alas, my savior has arrived in the form of artist J. Scott Campbell who wanted childhood memories ruined as much as me. That’s why he drew this gallery of sexy Disney princesses which you can find below. It’s one of the better art projects we’ve ever featured on the site, and I think you’ll like it more than you probably should. There’s one more of Sleeping Beauty that I don’t think I can legally show on the site here, so head over to Geekologie to check that one out.