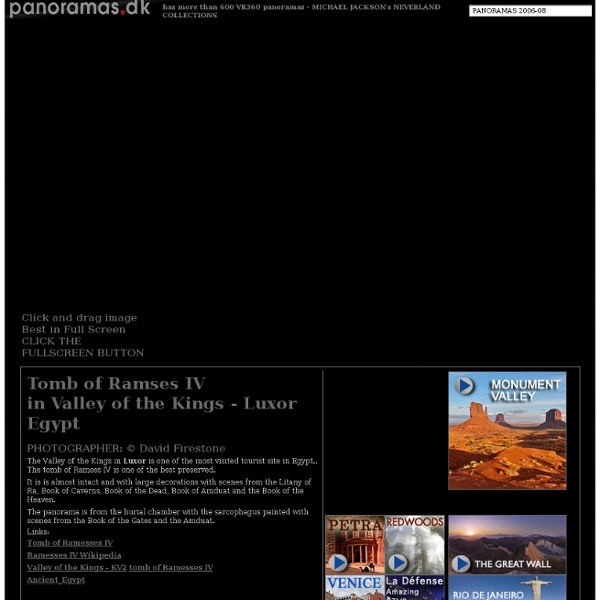 Language Arts Games - Grammar, Punctuation, Capitalization, Vocabulary Sheppard Software's Language Arts page features a variety of games for different grade levels. Elementary students (and anyone who needs a refresher) can play the animated grammar and punctuation games, which review basic punctuation and grammar concepts. This section is continually being refined and expanded, so check back often!

Ancient Underwater City Found Off India: Discovery in Bay of Cambay Will Force Western Archaeologists to Rewrite History Now, it was announced in January, a civilization has been uncovered that would have appeared just as ancient to the people who built the pyramids as the pyramids seem to us. According to marine scientists in India, archaeological remains of this lost city have been discovered 36 metres (120 feet) underwater in the Gulf of Cambay off the western coast of India. And carbon dating says that they are 9,500 years old.

Grand Canyon Virtual Tour Shoshone Point Panorama - Grand Canyon 360 degree Panoramic Photo, QTVR GRAND CANYON NATIONAL PARK Shoshone Point - Arizona The Shoshone Point at the South Rim of Grand Canyon is a quiet place compared to the more visited Grandview point and Yaki Point. To get there from the parking place there is a two-mile round trip taking you 20 min trough a forest of Ponderosa pines. The views from the point are spectacular. Tagxedo - Creator Processing ... Personal $ Svg $20 ✓ Ancient Civilizations The Invisible Science: The Other Egypt Home | About Us | Contact | Subscribe The Invisible Science: The Other Egypt John Anthony West Temple of Karnak: The "House of Life" ForbiddenKnowledgeTV Alexandra Bruce August 29, 2013 A growing body of evidence is suggesting a missing chapter in human history.

List of Interactive Quizzes The quizzes with a magenta marble are also listed within the section or digital handout to which they apply. The twenty-one quizzes with a green marble and designated "Practice" have been adapted from the instructor's manual and other ancillary materials accompanying Sentence Sense: A Writer's Guide. They are duplicated here with permission of the author, Evelyn Farbman, and the publisher, Houghton Mifflin Inc. 10 Civilizations That Mysteriously Disappeared Throughout our history, most civilizations have either met a slow demise or were wiped out by sudden natural disasters or invasion. But there are a few societies whose disappearance has scholars truly stumped: 10. The Olmec One of the first Mesoamerican societies, the Olmec inhabited the tropical lowlands of south-central Mexico. The first signs of the Olmec are around 1400 BC in the city of San Lorenzo, the main Olmec settlement which was supported by two other centers, Tenochtitlan and Potrero Nuevo.

The Great Geek Manual » The World’s Most Beautiful Libraries I make no secret of the fact that I’m a hardcore bibliophile, but we’re a common enough lot these day. And the one sight that always makes me linger over a webpage is rows and rows of neatly organized books. So, in an effort to draw more like-minded read here to my little blog, I decided to round-up a gallery of photos of some of the most beautiful libraries I’ve ever seen photos of.

Shelve-it Full Screen About Shelver Mrs. Lodge is a library teacher in an elementary school. Hieroglyphs Hieroglyphs. . . . . .A brief description. The Alphabet. . . . . .These are the signs that make the sound of one letter. These glyphs are used to translate into our modern languages. With pictures English Teachers: If you would like to use this Question Words wall chart in your classroom, then you can purchase a copy here: Question Words Wall Chart and Flash Cards. The most common question words in English are the following: WHO is only used when referring to people. (= I want to know the person) Who is the best football player in the world?

Earliest Complete Human Figurine Unearthed On Cyprus Get our top stories Follow MessageToEagle.com Subscribe in a reader Other Popular Articles Sirius Mystery by Robert Temple - Book Review A spaceship arrived from the sky and landed with a great noise and wind, on three legs. "After the landing, something with four legs appeared and dragged the vessel to a hollow, which filled with water until the vessel floated in it," according to the Dogon legend that has been passed through generations.