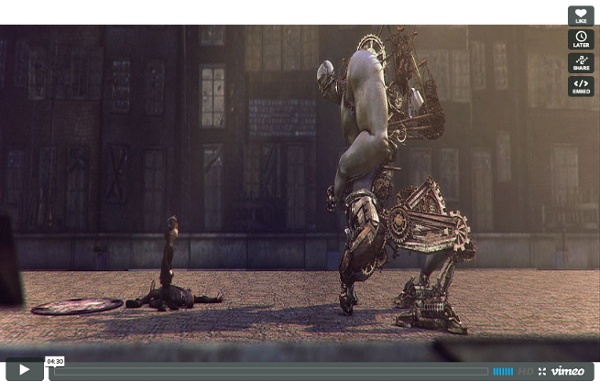 InfoGraphics See 16 Of Your Beloved Childhood Icons Reimagined As Psychopaths Barbie has become a literal man killer and Bambi has impaled the creatures of the forest on his razor-sharp antlers. This is the world of "Badass," a series of reimagined popular cartoons by French artist Sylvain Sarrailh. It's a world in which Babar is a drunken nihilist not above crushing hapless humans, Ronald McDonald is a lunatic who's just impaled Grimace and the Hamburglar and Denver the dinosaur proves himself an entirely unsuitable human companion. And for Sarrailh, it's a world that exists just adjacent to the decidedly fuzzier world we knew as kids. What most children see as cute and cuddly, Sarrailh has reframed and slightly amplified as vicious and immoral. "I find some suffering or violence [in each character] and I multiply it by a thousand," he says. Sarrailh admits that the project might seem a little immature.

Get a Skewed View of the American West Through These Bent-Horizon Photos - Atlas Obscura When English theologian and retired schoolmaster Edwin Abbott Abbott wrote his eccentric, satirical novel Flatland in 1884, he created a world populated by flat shapes: squares, lines, circles and hexagons forever trapped in horizontal lives, only able to escape through dreams or otherworldly transport to a third dimension. It’s an unexpected critique of Victorian class distinctions and constraints, and one that inspired modern-day photographer Aydın Büyüktaş to explore his own understanding of escape, in a series of collage images called Flatland and Flatland II. As an artist based in Turkey, Büyüktaş saw something in the colors and planes of the American West that spoke to his own view of overcoming constraints. Using his skills in 3-D animation and visual effects to assemble multiple overhead shots into seamless photographs, he does away with the horizon while simultaneously expanding and constricting the landscape.

Polish Painter Who Learned To “Photograph Dreams” – His Works Will Give You Nightmares Let us take you on a journey through the curious mind of a Polish artist, Zdzisław Beksiński, who made a name for himself with his dystopian surrealism paintings, filled with post-apocalyptic imagery and nightmarish creatures. Show Full Text The artist is no longer with us to better explain the vast roster of over 300 of his works, but he used to say: "I wish to paint in such a manner as if I were photographing dreams.” These unseen combinations gave birth to mind-bending scenarios, which do build an anxious feeling while looking at them.