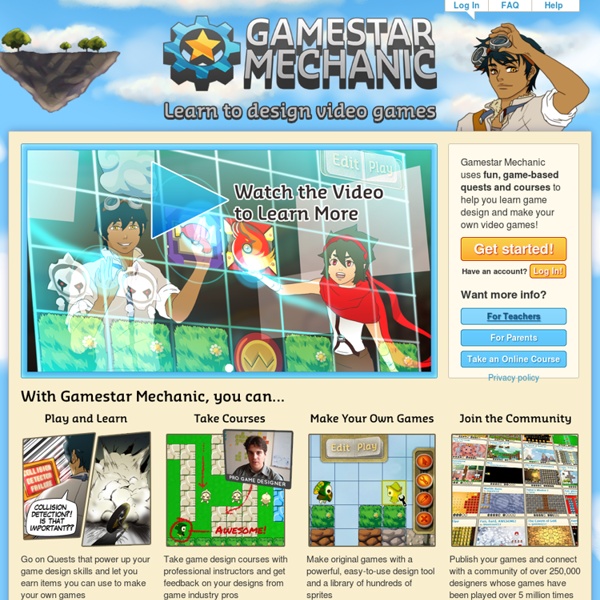 The Importance of Thinking In- and Out-of-the-Box How to encourage creativity in a tech-based environment. GUEST COLUMN | by Wendy Marshall How do you teach a student to be creative? It used to be that educators encouraged innovation by telling children to “think outside the box” via a “sky’s the limit” approach. Creativity was viewed as unstructured and a result of not following rules or patterns. About An overview of Kodu. (Click to play) Kodu lets kids create games on the PC and Xbox via a simple visual programming language. Coding Boot Camps Fast Track Females into Innovation by Natalie Shoemaker The gender gap is Silicon Valley, where fewer than one in five technical employees are women, is no longer a well-kept secret. But we can't just blame the computing industry for its dearth of female workers. The problem starts in school. As of 2012, the National Science Foundation reported only 18 percent of computer science degrees were obtained by women.

Rubrics and Rubric Makers As we all know grading is the most necessary procedures of our career. It might just be me, but grading is the bane of my existence. Do you feel the same way? Grading large works, especially towards the end of the school year, feels like it is an endless and mindless process. Daisy the Dinosaur Daisy the Dinosaur is an iPad app that teaches basic programming to young children. It has a Challenge Mode, in which the user is given 5 challenges that increase in difficulty, beginning with programming the dinosaur to walk forward. In Freeplay Mode, the user can experiment with several different commands, including making Daisy grow or shrink. I think that this app is perfectly appropriate for students as young as Kindergarten. They may need some help with the reading, but will enjoy solving the problems.

What skills will you need to succeed in the future? Top 10 skills for the successful 21st-century worker Leadership MicroWorlds EX We think our products are great! But don't just take our word for it, here's what teachers have to say... "I was first introduced to Logo about 20 years ago at the University of Nebraska. About 10 years ago when the opportunity came up to teach a 6-week exploratory class for seventh graders, I knew right away that I wanted to use MicroWorlds! Now that MicroWorlds EX is out, the students are not only experiencing computer programming at their level of expertise, but I firmly believe that MicroWorlds builds a strong foundation towards a future computer science career." Tom J.

index A random gap-fill is always generated automatically based on your text in textivate. And because it is randomly generated, the gaps change each time the exercise is loaded. But this screen creates an extra gap-fill exercise where you decide which words are gapped. Stencyl Build Worlds If you're used to graphics editors like Photoshop, you'll feel right at home in the Scene Designer. Familiar features, such as a selection tool, zooming, grid-snapping and flood fill, will help you quickly craft complex worlds out of Actors, Tiles and Terrain. Create Actors Drop in graphics from your computer to create Actors on the fly. Then use Stencyl's Actor Editor to tweak your Actors' appearances, behaviors and physical properties, and to get them ready for showtime. Browse Game Assets When it comes to game development, most of us aren't Jacks of all trades.

The Other 21st Century Skills Many have attempted to identify the skills important for a learner today in this era of the 21st century (I know it is an overused phrase). I have an affinity towards the skills identified by Tony Wagner: Critical thinking and problem-solvingCollaboration across networks and leading by influenceAgility and adaptabilityInitiative and entrepreneurialismEffective oral and written communicationAccessing and analyzing informationCuriosity and imagination Today I viewed a slideshow created by Gallup entitled, The Economics of Human Development: The Path to Winning Again in Education. Here are some slides from this presentation. This presentation sparked my thinking about what other skills and attributes would serve the learners (of all ages) in this era of learning.