View.commonsensemedia-email. I believe that any game can be a learning game. 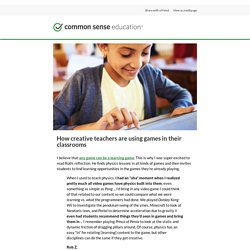 This is why I was super excited to read Rob's reflection. He finds physics lessons in all kinds of games and then invites students to find learning opportunities in the games they're already playing. When I used to teach physics, I had an "aha" moment when I realized pretty much all video games have physics built into them, even something as simple as Pong ... I'd bring in any video game I could think of that related to our content so we could compare what we were learning vs. what the programmers had done.

We played Donkey Kong Wii to investigate the pendulum swing of the vines, Minecraft to look at Newton's laws, and Portal to determine acceleration due to gravity. Game-Based Learning Collection Resources. Make Your Own 2d Games With Construct 2. The Construct 2 start page Quick & Easy Bring your work to life in hours and days instead of weeks and months. 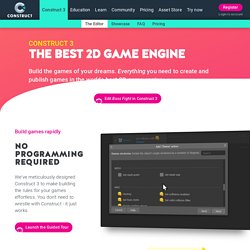 15 Games To Teach Kids About Social Issues - EasyBib Blog. Incorporating games into the classroom is a great way to engage students and increase motivation. 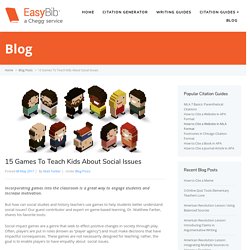 But how can social studies and history teachers use games to help students better understand social issues? Our guest contributor and expert on game-based learning, Dr. Matthew Farber, shares his favorite tools: Social impact games are a genre that seek to effect positive changes in society through play. Often, players are put in roles (known as “player agency”) and must make decisions that have impactful consequences. Brain Teasers, Puzzles, Riddles, Trivia and Games. Brain Games and Online Puzzles.

60 Wedding Shoe Game Questions. Wedding receptions are a great relief for everyone involved in the wedding as it means the most stressful part is over and it’s party time! 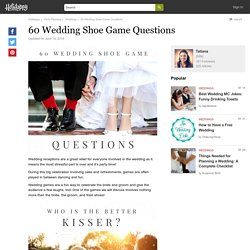 During this big celebration involving cake and refreshments, games are often played in between dancing and fun. Wedding games are a fun way to celebrate the bride and groom and give the audience a few laughs, too! One of the games we will discuss involves nothing more than the bride, the groom, and their shoes! The Wedding Shoe Game The wedding shoe game is a game that is becoming increasingly popular and being played at wedding receptions all over the place. Here Is A Great Tool for Creating Educational Video Games to Use in Class. February 10, 2016Pixel Press is an excellent application that enables you to draw your own video games. 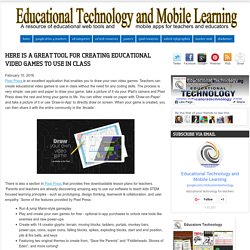 Teachers can create educational video games to use in class without the need for any coding skills. The process is very simple: use pen and paper to draw your game, take a picture of it via your iPad’s camera and Pixel Press does the rest and bring your game to life. You can either create on paper with ‘Draw-on-Paper’ and take a picture of it or use ‘Draw-in-App’ to directly draw on screen. When your game is created, you can then share it with the entire community in the ‘Arcade’. There is also a section in Pixel Press that provides free downloadable lesson plans for teachers. Learn to build Android apps. GameSalad - Make Games for iOS, Android & HTML5 - Drag & Drop - No Coding Required. Game creation for everyone. GameMaker: Studio. 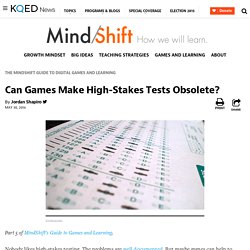 Nobody likes high-stakes testing. The problems are well documented. But maybe games can help to change the way we approach assessment. At least since John Dewey, educational theorists and scholars have been clear about the inherent shortcomings of thinking about education in terms of standardized, quantifiable outcomes. In order for instructional strategies to be successful at a large scale, they need to take individual differences under consideration. Howard Gardner, John H. and Elisabeth A. Could Video Games Measure Skills That Tests Can’t Capture? Imagine you’re playing a computer game that asks you to design a poster for the school fair. 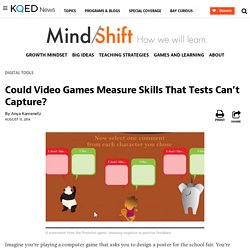 You’re fiddling with fonts, changing background colors and deciding what activity to feature: Will a basketball toss appeal to more people than a pie bake-off? Then, animal characters — maybe a panda or an ostrich — offer feedback on your design. You can choose whether to hear a compliment or a complaint: “The words are overlapping too much,” or, “I like that you put in the dates.” Beyond Grades: Do Games Have a Future As Assessment Tools? Most tests represent a snapshot of one moment in the trajectory of a student’s academic journey, extrapolating what the student has learned overall. 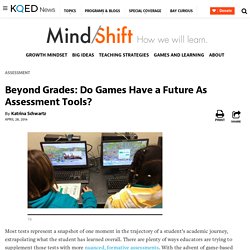 There are plenty of ways educators are trying to supplement those tests with more nuanced, formative assessments. With the advent of game-based learning, educators have been investigating how data collected from video game play could provide insight into the way students think as they explore new concepts. A report from the game developers, learning specialists and psychometricians involved with GlassLab’s project SimCityEDU finds that there’s great potential for games and assessment, but a lot of work to be done before games are used as primary assessment tools.

SimCityEDU is a game created to introduce environmental science to middle school students. “The state of mind that game designers are chasing is similar to what teachers are trying to do, which is get students in the zone of proximal development,” Kamenetz said. The Guide to Digital Games and Learning. MindShift Guide to Digital Games and Learning How can games unlock a rich world of learning? 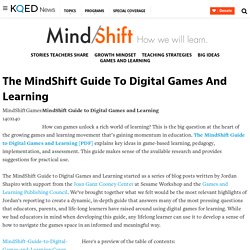 This is the big question at the heart of the growing games and learning movement that’s gaining momentum in education. The MindShift Guide to Digital Games and Learning [PDF] explains key ideas in game-based learning, pedagogy, implementation, and assessment. This guide makes sense of the available research and provides suggestions for practical use. Making Games: The Ultimate Project-Based Learning. Part 6 of MindShift’s Guide to Games and Learning. 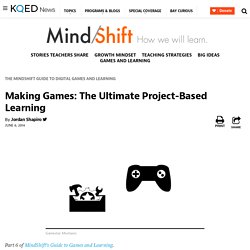 As game-based learning increases in popularity, it’s easy to get pigeon-holed into one particular way of thinking about it or one way of employing it. This is true regardless of how teachers feel about gaming in the classroom, whether they’re for or against it. One common objection to game-based learning is that students will sit in front of screens being taught at. Sure, games are interactive, but on some level, don’t they still just replace the sage on the stage with the sage on the screen? Does a joystick really change the nature of pedagogy? In previous posts in this series, I’ve argued that because games involve systems thinking, they contextualize learning. Why Kids Should Make the Video Games They Love to Play. When educator Lynn Koresh hears from kids that they want a career doing something with computers, she asks, “To do what with computers?”

Adults often encourage kids to pursue science, technology, engineering and math (STEM) skills, and computing classes are usually a first stop. But Koresh knows it’s the real-world applications of computational thinking and coding language skills that bring such knowledge to life. She reasoned that most middle school students are already playing video games and might respond well to a unit on how to design, create, test and promote video games. Along the way, she’s also teaching them about digital citizenship and entrepreneurship. “I wanted to give kids exposure to what it means to have a career using computers,” said Koresh, technology coordinator at Edgewood Campus School in Madison, Wisconsin.

MicroWorlds EX. We think our products are great! But don't just take our word for it, here's what teachers have to say... "I was first introduced to Logo about 20 years ago at the University of Nebraska. About 10 years ago when the opportunity came up to teach a 6-week exploratory class for seventh graders, I knew right away that I wanted to use MicroWorlds!

Now that MicroWorlds EX is out, the students are not only experiencing computer programming at their level of expertise, but I firmly believe that MicroWorlds builds a strong foundation towards a future computer science career. " Tom J. "MicroWorlds EX is all any teacher would need to create a balanced, challenging technology curriculum. "I have been teaching LOGO for 12 years now and I love the MicroWorlds software. "(...) GameSalad - Make Games for iOS, Android & HTML5 - Drag & Drop - No Coding Required. Game creation for everyone. Computer Programming. About. An overview of Kodu. (Click to play) Kodu lets kids create games on the PC and Xbox via a simple visual programming language. Kodu can be used to teach creativity, problem solving, storytelling, as well as programming.

Anyone can use Kodu to make a game, young children as well as adults with no design or programming skills. Since Kodu's introduction in 2009, we have visited the White House, teamed up with great groups like NCWIT and DigiGirlz, inspired academic research and been the subject of a book (Kodu for Kids). Kodu for the PC is available to download for free. GameMaker: Studio. Gamestar Mechanic. ESA LOFT Innovation. Archive for Games for Learning. Archive for Game-Based Learning. Jigsaw Planet - Free Online Jigsaw Puzzles. Free Online Jigsaw Puzzles. 15 Free Games To Jumpstart Student Brains. The Difference Between Gamification And Game-Based Learning. The Difference Between Gamification And Game-Based Learning Gamification and game-based learning are each buzzwords (and buzzphrases) in education. Each can offer your classroom something, but many mistake one for the other.

Can you tell the difference? The Definition Of Gamification. 21 Smart Games For Game-Based Learning. Game-Based Learning? 30 Non-Violent Video Games That Don't Suck. One person’s mushroom stomper is another’s person’s fungus murderer. So it may not be absolutely correct to say that every single one of these games is entirely free from any matter of violence whatsoever. In fact, in Braid, you can indeed “die” falling on spikes. But for the most part, they are indeed non-violent games, and certainly nothing approach the reality of many modern “shooters.”

Violence is a matter of degrees if not interpretation. Truth be told, most non-violent games aren’t fun. How Minecraft Can Be Used To Create A Video Game. 6 Basic Benefits Of Game-Based Learning. There seems to be a perception that online gaming has a detrimental impact on children’s development. Nothing could be further from the truth, and there are countless–and complex–reasons for this, but it also makes sense at the basic benefits of game-based learning.

Of course children should not spend every single second of the day staring at a computer screen. Nevertheless, education and online gaming certainly aren’t enemies either. How Game-Based And Traditional Learning Are Different. There are several big movements underway that are worthy of debate and possible consideration as we look to help education become the 21st century, user-centered, on-demand, engaging, technology-centric activity that it has not been for much of its existence. Game-based learning (GBL), or gamification, is one of the models that commonly gets touted as a cure-all for the problems with education because of the popularity of gaming in our society (New Media Institute).

While there are problems with the gamification movement as it currently stands, the model has several areas in which it differs sufficiently from traditional education to make it an intriguing possibility. Here is a look at several of those differences. Authenticity. Quandary.