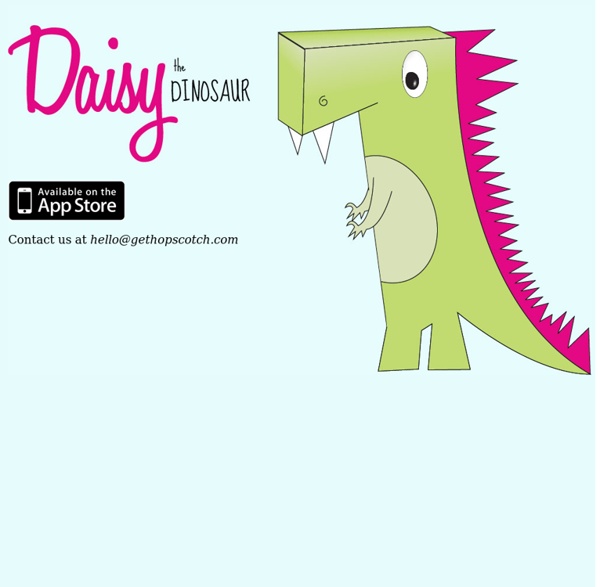 Floors — Pixel Press Bring your video game ideas to life, simply by drawing! Pixel Press Floors is changing the way we experience mobile games by letting anyone be the creator, publisher and player of their own video game. With our creator platform, you can literally draw your own video game – no coding required. By recognizing the shapes (“glyphs”) you draw on paper or in the app using our “Draw-in-App” tools, we instantly turn your level blueprint into a game that can be tested, designed, played – and most importantly, published to the “Arcade” where others can enjoy your level and you can track how many times it’s played. Is this a good fit for parents & teachers?

Daisy the Dinosaur Daisy the Dinosaur is an iPad app that teaches basic programming to young children. It has a Challenge Mode, in which the user is given 5 challenges that increase in difficulty, beginning with programming the dinosaur to walk forward. In Freeplay Mode, the user can experiment with several different commands, including making Daisy grow or shrink. Cargo-Bot – iPad The first game programmed entirely on iPad® Be Logical. Play Cargo-Bot The Natives Aren't Restless Enough A couple of points to start with, in the hopes of not wasting readers’ time and preparing for some reactions: This post could be named “Get Off My Lawn” or “In My Day, We Earned It!” or some other title that would demonstrate that I am, more than ever, a cranky old guy now. What follows obviously does not apply to everyone younger than I am (42, for the record). But it does apply to a distressingly large percentage of those who I have taught at the university level (undergraduate and graduate) over the past eight years. This post stems from one sentence in a Poynter summary of a MOOC I helped teach, but this is not about the author of that piece.

Stencyl Build Worlds If you're used to graphics editors like Photoshop, you'll feel right at home in the Scene Designer. Familiar features, such as a selection tool, zooming, grid-snapping and flood fill, will help you quickly craft complex worlds out of Actors, Tiles and Terrain. Create Actors Drop in graphics from your computer to create Actors on the fly. CS Fundamentals for grades K-5 Our Computer Science Fundamentals courses have about 15 lessons that may be implemented as one unit or over the course of a semester. Students create computer programs that will help them learn to collaborate with others, develop problem-solving skills, and persist through difficult tasks. They will study programming concepts, computational thinking, digital citizenship, and develop interactive games or stories they can share.

How To Become A Hacker Copyright © 2001 Eric S. Raymond As editor of the Jargon File and author of a few other well-known documents of similar nature, I often get email requests from enthusiastic network newbies asking (in effect) "how can I learn to be a wizardly hacker?". Back in 1996 I noticed that there didn't seem to be any other FAQs or web documents that addressed this vital question, so I started this one. A lot of hackers now consider it definitive, and I suppose that means it is. Computer Game Design in the Classroom - Stencyl as a tool for creating Flash games I've been briefly highlighting some computer game creation tools over the past week. The first two articles are here: For this installment I want to focus on my current resource of choice: Stencyl

Drawing with Ozobot Ozobot won’t move until at least one of the five bottom sensors sees a color. For instance Ozobot will just patiently sit, wait and blink when placed on a white sheet of paper. Place Ozobot on a dark area, like a wood desk or a black kitchen counter and Ozobot will immediately begin exploring and searching for the next adventure. Tip: Ozobot is Completely obsessed with finding a path and won't hesitate to jump off your dark desk. Drawing a perfect path.

Makers, Hackers and Gamers: Learners and 21st Century Pedagogy Date(s) and Time: October 28, 201302:00 pm - 03:00 pm EST Provided by: Games MOOC Description: This is the opening webinar for the Fall 2014 Games Based Learning MOOC. Let’s look at the online learning trends and even pedagogy coming out the Maker, Hacker and Gamer communities. Easy Scratch Project Ideas for Kids Scratch is an amazing programming environment for children to learn about computer programming. It’s graphical environment is so easy that most of us and kids as young as in 2nd grade will know how to work with it in less than an hour. Almost all kids and adults interested in computer programming will like to do more with it and in the process we may need some easy and interesting Scratch project ideas. There are thousand of projects are shared on Scratch website but let’s make a list over here to start with. This list shows beginner’s level Scratch project ideas.

Ozobot Bit Adorable robot genius, anyone? These little ‘bots are guaranteed to bust even the most acquainted of minds. (We’re talking about you, nerds.) Ozobot's behaviour is programmed with a doodle, which is fantastic news, because intrigue of human-robot interaction aside, it’s likely been a couple of decades since it was deemed acceptable for you to get your scribble on. Thanks to Ozobot, no longer are illegible markings reserved for infants. 5 Great Tools to Teach Coding Every student in every school should have the opportunity to learn computer science. Coding teaches you how to think. Below are resources for kids (and adults) to learn more about the exciting world of coding! Scratch - Developed by MIT, Scratch is one of the best coding sites out there. Scratch teaches and allows students to create fun games while learning all about coding.

What is Logo? "Logo is the name for a philosophy of education and a continually evolving family of programming languages that aid in its realization." - Harold Abelson Apple Logo, 1982 This statement sums up two fundamental aspects of Logo and puts them in the proper order. The Logo programming environments that have been developed over the past 28 years are rooted in constructivist educational philosophy, and are designed to support constructive learning. Constructivism views knowledge as being created by learners in their own minds through interaction with other people and the world around them.