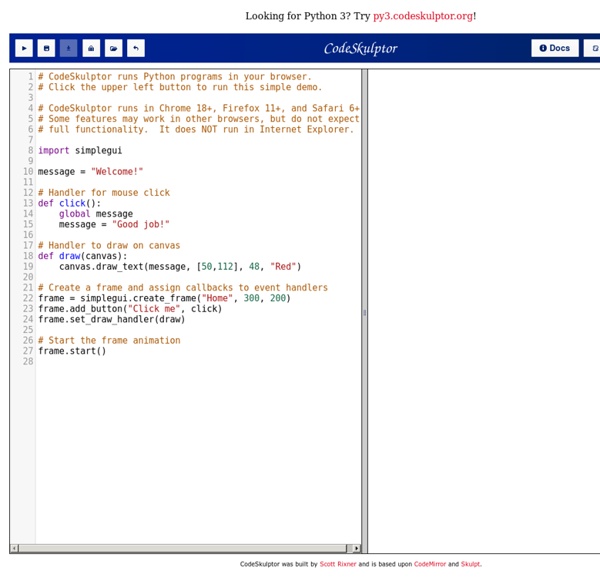 Getting Started: Building a Chrome Extension Extensions allow you to add functionality to Chrome without diving deeply into native code. You can create new extensions for Chrome with those core technologies that you're already familiar with from web development: HTML, CSS, and JavaScript. If you've ever built a web page, you should feel right at home with extensions pretty quickly; we'll put that to the test right now by walking through the construction of a simple extension that will give you one-click access to pictures of kittens.

24.6. IDLE — Python v2.7.4 documentation IDLE is the Python IDE built with the tkinter GUI toolkit. IDLE has the following features: coded in 100% pure Python, using the tkinter GUI toolkitcross-platform: works on Windows and Unixmulti-window text editor with multiple undo, Python colorizing and many other features, e.g. smart indent and call tipsPython shell window (a.k.a. interactive interpreter)debugger (not complete, but you can set breakpoints, view and step) 24.6.2. Basic editing and navigation untitled Python is an interpreted language, this means that your computer does not run Python code natively, but instead we run our code using the Python interpreter. There are two ways in which you can run Python code: Directly typing commands into the interpreterGood for experimenting with the language, and for some interactive workTyping code into a file and then telling the interpreter to run the code from this fileGood for larger programs, and when you want to run the same code repeatedly While we are initially exploring the language we will use the interpreter interactively. How you start the interpreter will depend on which operating system you are using, but on a Mac or Linux machine you should start a terminal and then just type the command python.

Hands-On Python A Tutorial Introduction for Beginners Hands-On Python A Tutorial Introduction for Beginners Contents Chapter 1 50 Places You Can Learn to Code (for Free) Online If you’re curious about learning a programming language then you’re in luck: there’s no shortage of resources for learning how to code online. University-level courses, tutorials, cheat sheets, and coding communities all offer excellent ways to pick up a new language, and maybe even a new job, too. Read on, and you’ll discover 50 great places to learn how to code, for free, online. University Many big names in education including MIT and Stanford offer programming courses, absolutely free. General

Read, Write, Innovate! Silicon Valley May 3rd, 4th, and 17th, 9am-4pm What do Instagram, Snapchat and Twitter have in common? They were all created by people who knew how to code. Programming is a skill that gives you the ability to create and innovate. s Python Class - Educational Materials Welcome to Google's Python Class -- this is a free class for people with a little bit of programming experience who want to learn Python. The class includes written materials, lecture videos, and lots of code exercises to practice Python coding. These materials are used within Google to introduce Python to people who have just a little programming experience. The first exercises work on basic Python concepts like strings and lists, building up to the later exercises which are full programs dealing with text files, processes, and http connections. The class is geared for people who have a little bit of programming experience in some language, enough to know what a "variable" or "if statement" is.

Benefits of this Interactive Textbook — How to Think like a Computer Scientist: Interactive Edition This interactive book is a product of the Runestone Interactive Project at Luther College, led by Brad Miller and David Ranum. There have been many contributors to the project. Our thanks especially to the following: This book is based on the Original work by: Jeffrey Elkner, Allen B. Code Like a Pythonista: Idiomatic Python In this interactive tutorial, we'll cover many essential Python idioms and techniques in depth, adding immediately useful tools to your belt. There are 3 versions of this presentation: ©2006-2008, licensed under a Creative Commons Attribution/Share-Alike (BY-SA) license. My credentials: I am a resident of Montreal,father of two great kids, husband of one special woman,a full-time Python programmer,author of the Docutils project and reStructuredText,an editor of the Python Enhancement Proposals (or PEPs),an organizer of PyCon 2007, and chair of PyCon 2008,a member of the Python Software Foundation,a Director of the Foundation for the past year, and its Secretary. In the tutorial I presented at PyCon 2006 (called Text & Data Processing), I was surprised at the reaction to some techniques I used that I had thought were common knowledge.

Become a Programmer, Motherfucker If you don't know how to code, then you can learn even if you think you can't. Thousands of people have learned programming from these fine books: Learn Python The Hard Way Learn Ruby The Hard Way