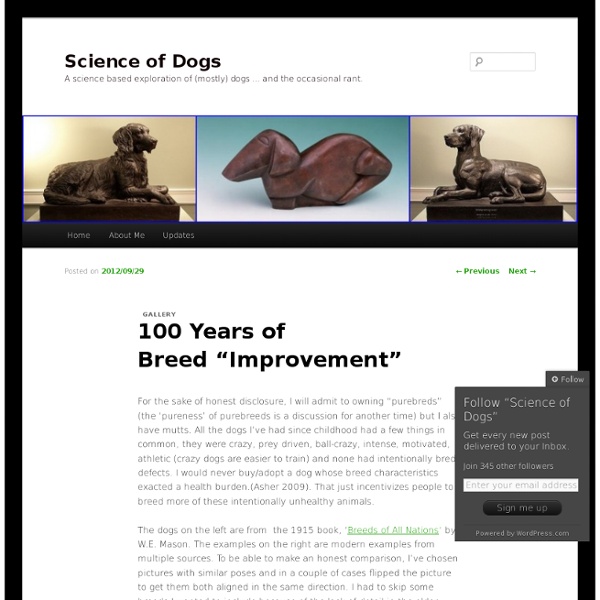 For the sake of honest disclosure, I will admit to owning “purebreds” (the ‘pureness’ of purebreeds is a discussion for another time) but I also have mutts. All the dogs I’ve had since childhood had a few things in common, they were friendly, prey driven, ball-crazy, intense, motivated, athletic (crazy dogs are easier to train) and none had intentionally bred defects. I would never buy/adopt a dog whose breed characteristics exacted a health burden.(Asher 2009). That just incentivizes people to breed more of these intentionally unhealthy animals. The dogs on the left are from the 1915 book, ‘Breeds of All Nations‘ by W.E. It seems incredible that at one time the Bull Terrier was a handsome, athletic dog. The Basset Hound has gotten lower, has suffered changes to its rear leg structure, has excessive skin, vertebra problems, droopy eyes prone to entropion and ectropion and excessively large ears. A shorter face means a host of problems. Once a noble working dog, the modern St. Like this:

How Dogs Know What You're Feeling When you hear a friend’s voice, you immediately picture her, even if you can’t see her. And from the tone of her speech, you quickly gauge if she’s happy or sad. You can do all of this because your human brain has a “voice area.” Now, scientists using brain scanners and a crew of eager dogs have discovered that dog brains, too, have dedicated voice areas. The finding helps explain how canines can be so attuned to their owners’ feelings. “It’s absolutely brilliant, groundbreaking research,” says Pascal Belin, a neuroscientist at the University of Glasgow in the United Kingdom, who was part of the team that identified the voice areas in the human brain in 2000.

BioInteractive Search Results Series Where and when did humans arise? What distinguishes us from other species? Did our distant ancestors look and behave like us? How has the amazing diversity of plants and animals evolved? 10 Healthiest 'People Foods' You Should Be Feeding Your Dog 1. Lean Meat: Energy Tayra Lucero for LittleThings Dogs need meat, as it provides them with the bulk of their energy through its protein. Lean meats like chicken, pork, and beef are also great sources of B vitamins and amino acids, which also boost energy and metabolism.

Mirrors finally bring winter sun to Rjukan in Norway 30 October 2013Last updated at 14:00 ET Rjukan gets no sunlight for about seven months of the year because it is in a valley surrounded by mountains, as Verity Wilde reports The people of Rjukan in Norway are celebrating the installation of giant mirrors, which have finally brought winter sunshine to their town centre. Rjukan lies in a deep valley, and during the six months of winter the surrounding mountains cast a shadow over the town even at midday. About 1,000 people, among them children in sunglasses, cheered when the main square became bathed in sun. The idea of using mirrors in Rjukan was first proposed 100 years ago.

The Wicker Man (1973 Edit Storyline Sgt. Howie travels to Summerisle to investigate the disappearance of a young girl. The dingo is originally from southern China THE DINGO (Canis lupus dingo) first appeared in Australia's archaeological records in 3500-year-old rock paintings in the Pilbara region of WA, but the new evidence suggests they were roaming Australia long before that. DNA samples from domestic Asian dog species and the Australian dingo have shed light on how the iconic canine arrived on Australian soil. According to a study by an international research team, genetic data shows the dingo may have originated in southern China, travelling through mainland southeast Asia and Indonesia to reach its destination anywhere between 4600 and 18,300 years ago. BioInteractive Search Results Lectures How reasoning and evidence are used to understand human evolution. Genetic evidence shows that humans evolved in Africa and continue to evolve. Stone tools are well-preserved evidence of past human activity. The hominid fossil record of the past six million years gives us surprising insights into the path of human evolution.