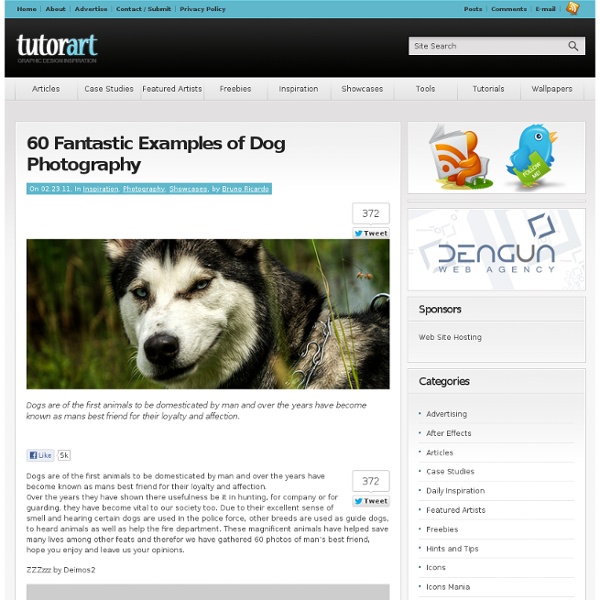 The World's Smallest and Deadliest Animals Smallest And Deadliest Animals: Poison Dart Frog The sprightly and brightly colored frog may look enchanting, but it can produce enough poison to kill 10 humans. Thriving in humid, tropical environments of Central and Latin America, the poison dart frog oozes black slime from its back, which is actually a neurotoxin used to ward off predators. Australian Box Jellyfish Found across the northern half of Australia – particularly in Queensland – the box jellyfish washes up on the shores after heavy rain and high tide. If stung, the venom contained in their tentacles attacks a human’s cardiac and nervous system – even when the tentacles aren’t attached to the jellyfish’s body.

Bamboo Famine Threatens Pandas - Conservation Jobs UK By Anna Taylor BSc Conservation Biology and freelance journalist @FreelanceAnna, Anna’s website Jcwf from nl [GFDL ( or CC-BY-SA-3.0 ( via Wikimedia Commons The giant panda, a species beloved throughout the world, will suffer because of its restricted diet and the future effects of climate change. A new study published earlier this month in Nature Climate Change has shown that prime panda habitat in China will disappear, as rising temperatures are set to wipe out bamboo. Massive Art Nouveau-Inspired Mural in Montreal For 16 days straight, from dawn to dusk, five highly determined Montreal-based artists (who make up the artist run collective A'shop) worked on a graffiti mural of a Mother Nature-esque Madonna or a modern-day version of "Our Lady of Grace." Inspired by Czech Art Nouveau painter Alphonse Mucha, the crew created this breathtakingly beautiful five story mural using 500 cans of spray paint in over 50 different colors. “We been doing graffiti for a long time but this is our first large project involving the whole team,” Fluke of A'shop told The Montreal Gazette. “We’re always busy with other projects so we’ve never really had time to let [the reactions to] them sink in. But this mural was just so big and also our last of the season.

How to pick up a baby Red Panda in 5 easy steps Step 1: Locate Cub. Snorf cub neck to determine if said cub is indeed the correct cub that needs a pickin’ (up.) Step 2: Brace self with nearby log (or chair leg) for support 10 Weird and Mysterious Places on Earth digg 1. Mystery Spot Mystery Sport is a tourist attraction near Santa Cruz, California, famous because of its disrespect to the laws of physics and gravity. The odd cabin, although seems like lying on flat ground, makes those who enter inside swinging all the time.

20 Amazing Animal Photography Shots Animal photography is one of the most challenging and rewarding form of photography. Stalking wildlife animal to take pictures of them is quite difficult, because in any moment your subject could run or worst attack you. Here are 20 amazing animal photography shots: Related Posts Top 10 Smartest Dog Breeds in the World Published on Tuesday, November 20, 2012 by administrator EmailShare 0EmailShare Australian Cattle Dog These dogs are one of the smartest dog breeds which are also highly affectionate and cute. They have a particularly pleasant nature and so, make excellent family pets. However, these dogs need a lot of exercise and so, you should be ready to spend a few hours on exercising if you want to own this breed.

What Her Last Shitty Relationship Can Teach You About What She Wants - MaleMetrics.com So, you’ve dated the wild party girl. She was sexually adventurous, fun, and hot as hell. She was also demanding, unreliable, and constantly wrapped up in some kind of drama. She was totally crazy but you were drawn to her for some unknown reason. Now, you meet a school teacher with girl-next-door good looks. The 15 Most Beautiful Flowers In The World Canna Cannas not only feature pretty blossoms, but also beautiful leaves (often likened to that of the banana plant) that come in a variety of stunning colors. Popularized in Victorian times, Cannas are popular garden plants. Almost human: Photographer's intimate studio portraits that show wild creatures making unnervingly similar gestures to us By Leon Watson Published: 20:31 GMT, 14 November 2012 | Updated: 17:27 GMT, 15 November 2012 How he got them to sit still, we don't know.

You Don’t Know The Meaning Of The Word ‘EPIC’ Until You Seen These 20 Pictures October 4, 2011 | 31 Comments » | Topics: Awesome, Pics Hot Stories From Around The Web Other Awesome Stories A dog’s seeing eye dog Lily is a Great Dane that has been blind since a bizarre medical condition required that she have both eyes removed. For the last 5 years, Maddison, another Great Dane, has been her sight. The two are, of course, inseparable. (via Weird Universe, Daily Record, The Sun)