These are the 'smartest' dog breeds, according to a canine psychologist. There’s no easy way to rate dog intelligence. 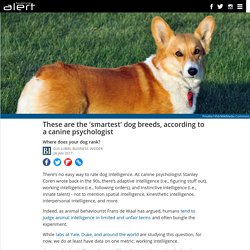 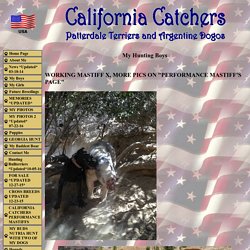 This time of day is when the coyotes are real bold. (young dogos) STEELBLOOD KENNEL SBK9 - Gallery. American Sentinel K9, LLC - The most performance proven Bandog in existence! - American Sentinel K9, LLC - the performance bred Bandog. Socal Presa Canario. The New Tool To Catch Poachers Is A Surprising One. TRS_Blog_DTOP_BelowTitle_336x280 posted By The Rainforest Site The Rainforest Site. 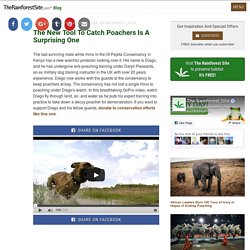 Scientists Discover That Dogs Are Actually Empathic Geniuses. Dogs are just as emotional as their human friends. 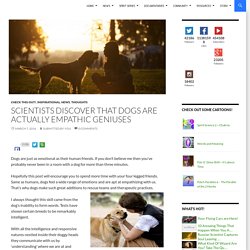 If you don’t believe me then you’ve probably never been in a room with a dog for more than three minutes. Hopefully this post will encourage you to spend more time with your four legged friends. Same as humans, dogs feel a wide range of emotions and are apt at empathizing with us. That’s why dogs make such great additions to rescue teams and therapeutic practices. I always thought this skill came from the dog’s inability to form words. American Sentinel K9 - The most performance proven Bandog in existence! - American Sentinel K9, LLC. Throughouthistory, the Bandogge(Bandog) has been described as a dog restrained ("banded") by chain or leash, yet released during combative tasks to catch various types of quarry. 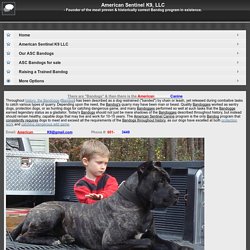 Depending upon the need, theBandog'squarry may have been man or beast. QualityBandoggesworked as sentry dogs, protection dogs, or as hunting dogs for catching dangerous game, and manyBandoggesperformed so well at such tasks that theBandoggeearned legendary status as a gladiator. Today'sBandogsshould not just be mere shadows of theBandoggesdescribed throughout history, but instead should remain healthy, capable dogs that may live and work for 10-15 years.

TheAmerican Sentinel Canineprogram is the onlyBandogprogram thatconsistently requiresdogs to meet and exceed all the requirements of theBandogs throughout history, as our dogs have excelled at bothprotection workandcatching dangerous wild game. Unfortunately, most so called "Bandogge (Bandog) breeders" lack the dedication needed to properly develop Bandogs. H. Dogs and Certain Primates May Be Able To See Magnetic Fields. Solve Your Predator Problems With Livestock Guardian Dogs, Donkeys, Llamas and More. For years, Sara and Adam Bryda of BlueMoon-N-Farms in Massachusetts valiantly fought off an assortment of predators determined to chow down on the family’s goats, sheep, ducks and chickens. 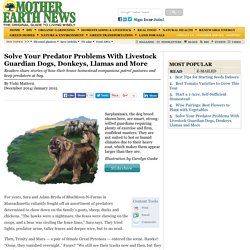 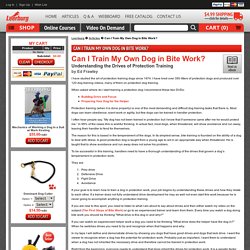 Can I Train My Own Dog in Bite Work? Understanding the Drives of Protection Training. Dobermann in Schutzhund. The most important considerations in training dogs in Protection are the drives and the nerve threshold of the particular animal. 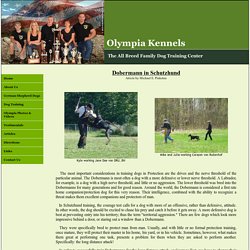 The Dobermann is most often a dog with a more defensive or lower nerve threshold. A Labrador, for example, is a dog with a high nerve threshold, and little or no aggression. The lower threshold was bred into the Dobermanns for many generations and for good reason. Around the world, the Dobermann is considered a first rate home companion/protection dog for this very reason. Their intelligence, combined with the ability to recognize a threat makes them excellent companions and protectors of man. 6 great ways to challenge your dog’s mind. New twist in tale of dogs' origins. The origin of dogs has inspired a lingering controversy in academia. 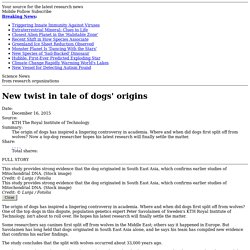 Where and when did dogs first split off from wolves? One of the top dogs in this dispute, population genetics expert Peter Savolainen of Sweden's KTH Royal Institute of Technology, isn't about to roll over. He hopes his latest research will finally settle the matter. Some researchers say canines first split off from wolves in the Middle East; others say it happened in Europe. But Savolainen has long held that dogs originated in South East Asia alone, and he says his team has compiled new evidence that confirms his earlier findings. The study concludes that the split with wolves occurred about 33,000 years ago. Does Having a Pet Make You More Attractive? Pit Bull Saves Woman from Attacker in Home Invasion. A 20-year-old Indiana woman says that her loyal dogs saved her during an attempted home invasion on Wednesday. 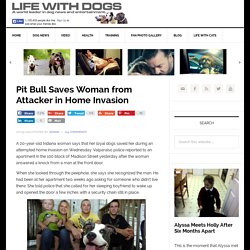 Valparaiso police reported to an apartment in the 100 block of Madison Street yesterday after the woman answered a knock from a man at the front door. When she looked through the peephole, she says she recognized the man. He had been at her apartment two weeks ago asking for someone who didn’t live there. She told police that she called for her sleeping boyfriend to wake up and opened the door a few inches with a security chain still in place. Photo© Sun-Times Media She asked what he wanted, and the suspect claimed that his car had broken down. Alarmed, the woman screamed for help. One of the dogs sprang ahead and bit the suspect on the arm. Police: Owner’s dog bites suspect, stops home invasion.