Chocolatey - The package manager for Windows 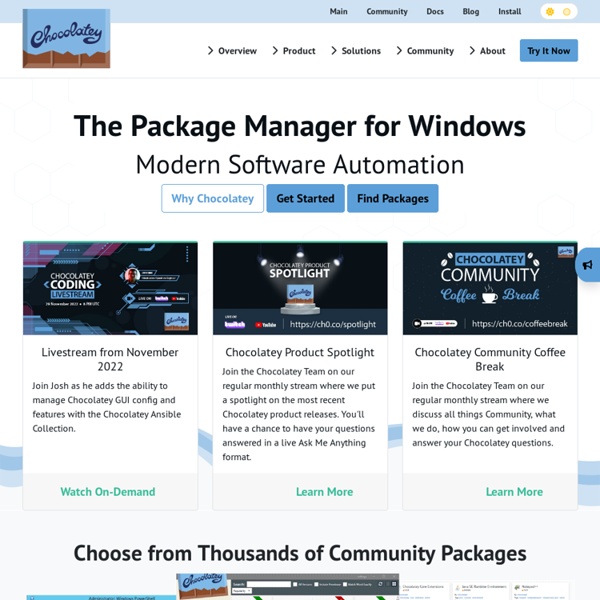 Downloads Here you will find links to VirtualBox binaries and its source code. VirtualBox binaries ¶ By downloading, you agree to the terms and conditions of the respective license. If you're looking for the latest VirtualBox 6.0 packages, see VirtualBox 6.0 builds. Please also use version 6.0 if you need to run VMs with software virtualization, as this has been discontinued in 6.1. Version 6.0 will remain supported until July 2020. Microsoft OneNote: Complementing Other Office Applications While the most widely-used Microsoft Office applications are robustly useful for their respective target domains — e-mail and calendar management (Outlook), print-oriented documents (Word), presentation graphics (PowerPoint), and spreadsheets (Excel) — they have not been particularly useful for note-taking or hypertext information management and collaboration. In Office 2010, Microsoft has introduced a variety of OneNote integration options that make OneNote a powerful complement to the traditional Office applications, and likely provide, collectively, a leading indicator of future Office trends that will further blur boundaries between productivity application categories. OneNote is a robustly useful application for hypertext information management and collaboration. OneNote is not intended to be a personal productivity panacea or some sort of uber-application.

Apps wont open in Windows 10 Hi Sharief, I ran the Windows 10 upgrade on my Samsung Ativ Book 8 this past Thursday. Initially I had no problems opening mail or calendar or other apps. A couple of days ago however, I found I could no longer launch mail or calendar either by clicking the Live Tile or the app shortcut in the Start Menu. your database in the cloud By Navneet Joneja, Product Manager for Google Cloud SQL Cross-posted from the Google App Engine Blog One of App Engine’s most requested features has been a simple way to develop traditional database-driven applications. In response to your feedback, we’re happy to announce the limited preview of Google Cloud SQL.

Defraggler Frequently Asked Questions 1. What's different about Defraggler? You can use it to defragment individual files as well as your entire hard drive - something our competitors simply can't do. 2. What are the system requirements? The Metro hater's guide to Windows 8.1 [October 17, 2013: Instructions and screenshots updated for official release of Windows 8.1] In unveiling Windows 8.1 earlier this year, Microsoft executives said, “We’re listening to feedback.” That’s a polite way of saying they were trying to avoid being splattered by a barrage of rotten tomatoes. Some of the most vocal complaints—sorry, feedback—came from longtime Windows users who wanted the good parts of Windows 8 without sacrificing the familiar Windows 7 desktop. Responding to that complaint was the impetus behind Microsoft’s decision to restore the Start button in Windows 8.1 to its traditional place at the left side of the taskbar.

TCP Optimizer / Downloads SG TCP Optimizer TCP Optimizer 4 (latest stable release that works with Windows XP, 7, 8, 8.1, 10, 2012 Server, etc.) Details: The TCP Optimizer is a free, easy Windows program that provides an intuitive interface for tuning and optimizing your Internet connection. There is no installation required, just download and run as administrator. The program can aid both the novice and the advanced user in tweaking related TCP/IP parameters in Windows, making it easy to tune your system to the type of Internet connection used. Scaling Twitter: Making Twitter 10000 Percent Faster Update 6: Some interesting changes from Twitter's Evan Weaver: everything in RAM now, database is a backup; peaks at 300 tweets/second; every tweet followed by average 126 people; vector cache of tweet IDs; row cache; fragment cache; page cache; keep separate caches; GC makes Ruby optimization resistant so went with Scala; Thrift and HTTP are used internally; 100s internal requests for every external request; rewrote MQ but kept interface the same; 3 queues are used to load balance requests; extensive A/B testing for backwards capability; switched to C memcached client for speed; optimize critical path; faster to get the cached results from the network memory than recompute them locally.Update 5: Twitter on Scala. A Conversation with Steve Jenson, Alex Payne, and Robey Pointer by Bill Venners. Twitter started as a side project and blew up fast, going from 0 to millions of page views within a few terrifying months.