15 Foods That Can Be Regrown From Scraps 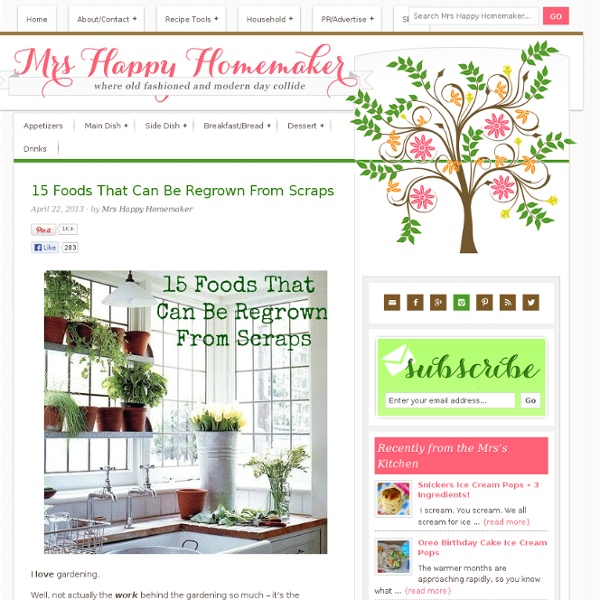 I love gardening. Well, not actually the work behind the gardening so much – it’s the harvesting that I really look forward to. There is nothing like fresh veggies from your own personal garden! I actually just planted a bunch of things in my vegetable garden, and may have gone a little plant happy at the feed & seed store. Oops. Obviously, we all know about the normal ways to grow plants – from seeds. Let’s count them out – from 1 to 15… 1, 2, 3, & 4. These are the ones I regrow the very most, I always have a mason jar of green onions regrowing above my kitchen sink. 5. You can regrow lemongrass the same way you regrow the green onions. 6. Plant a small chunk off of your piece of ginger in potting soil with the newest buds facing up. 7. Pick a potato that has a lot of good formed eyes, and cut it into 2-3 inch pieces, taking care to be sure that each piece has at least 1-2 eyes on it. 8. You will need sweet potatoes with good formed eyes, just as you would want with a regular potato.

Gutter Gardens Grow Produce Without Taking Up Space If you’d love to do a little at-home gardening but don’t have much space to do your planting, a simple gutter garden might be the perfect option. Alaskan news site Juneau Empire features a smart, simple idea for planting a small vegetable garden with very little space: A windowbox garden built from gutters. In Alaska, this idea solves a few problems for the author: We live near the glacier, so the soil is cold and has very little organic matter, there are lots of big trees shading it, and we have all the slugs and root maggots anyone could want, with porcupines, cats, bears and ravens meandering to boot.There is only one side of our house that gets much sunshine, and, of course, that side of the house has the smallest yard.

The 16 Best Healthy, Edible Plants to Grow Indoors From farmers’ markets and Community Supported Agriculture, to urban farms and rooftop gardens, to produce delivery services, more and more people across the U.S. are embracing farm-fresh food. And for good reason: Locally grown produce tends to be better for the environment and for local communities than its store-bought counterparts. Growing food at home also ensures that growers know exactly where their food comes from and how it was grown (no need to worry about deceptive food labeling). If you’re not whipping out the pruning shears yet, consider this: Learning new skills is good for our brains.

Criminal Injustice: The Best Reporting on Wrongful Convictions (#MuckReads) We’ve rounded up the best MuckReads on faulty criminal trials: from prosecutors suppressing evidence, to the convicted’s continued struggle after exoneration. In 1991, an unemployed printer named David Ranta was convicted of killing a Hasidic rabbi in Brooklyn. Last week, Ranta was released from the maximum-security prison in which he’d spent nearly 22 years, after almost every piece of evidence used to convict him fell away. 20 Healthiest Foods on Earth Some foods pack more nutritional punch than others, and these 24 offer the most health benefits pound for pound of all food on the planet. They not only show up on our massive list of Superfoods, but they also make it onto plenty of top 1o lists across the internet, and several have long been known to provide plenty of nutrients and and goodies for the body. There are a few that you might not be familiar with, so consider this an introduction, and then you can get to know them better in the future…

How To Grow Squash Learning how to grow squash can open your garden up to an astonishing variety of cultivars, most of which are not very difficult to have success with. Squash falls into two categories: summer squash and winter squash. Summer squash includes all the varietals of squash that will grow best in hot weather and mature during the mid to late summer. Summer squash typically should be harvested when its skin is still relatively thin, which means you can harvest summer squash before it is fully mature. However it also means that summer squash will not keep as long in your pantry as winter varietals will.

FBI sued over facial-recognition technology Text smaller Text bigger A team of privacy advocates and experts is launching a lawsuit against the FBI for refusing to provide information to the public about its new Next Generation Identification system, which the federal agency says is in demand for its biometric database of Americans. The lawsuit filed against the FBI in Washington by the Electronic Privacy Information Center is asking for a court order that information about the program’s contracts with private companies and its technical specifications be made available. EPIC said that the NGI system upon completion “will be the largest biometric database in the world” and will include files of fingerprints, DNA profiles, iris scans, palm prints, voice identification profiles, photographs and other identifying information already collected by states, counties and even schools.

11 of the Easiest Dinners You Can Possibly Make Posted by Cara on Monday Jan 13th, 2014 | Print There are no excuses right now. The year is new, and if you resolved to cook at home more, you can’t disasppoint yourself just yet. Like you, I sometimes get home at night and don’t want to cook. GreenStalk - Vertical Garden System by The Peterson Family Risks and challenges Packaging - The GreenStalk is a large lightweight planter. This presents challenges for product packaging. We currently use shrink wrap to package our product for shows and wholesale markets. However, the plastic warps over time and is very time consuming to put together. We are looking to add full color boxes with carrying handles as a packaging option.