Strawberry Shortcake Cake. IMPORTANT: Be sure to use a cake pan that’s at least 2 inches deep! 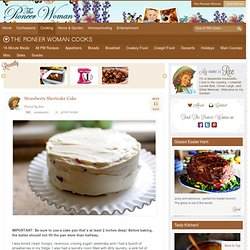 Before baking, the batter should not fill the pan more than halfway. I was bored (read: hungry, ravenous, craving sugar) yesterday and I had a bunch of strawberries in my fridge. I also had a laundry room filled with dirty laundry, a sink full of breakfast dishes, and a major ax to grind. So I decided to bake. It’s what I do when I have an ax to grind. I came *this close* to making strawberry shortcake—I had plenty of heavy cream in my fridge as well, which I could easily have sweetened, whipped, and plopped over the top of sweet biscuits and syrupy strawberries.

But yesterday, I wanted to be different. So I created something else. The Cast of Characters (for the cake): Unsalted Butter, Sugar, Eggs, Sour Cream, Vanilla, Baking Soda, Flour, Salt, and Cornstarch. For the icing/topping: Fresh Strawberries, Unsalted Butter, Cream Cheese, Powdered Sugar, and Vanilla. Throw the butter and sugar into the mixing bowl. My Favorite Meatloaf. This is a recipe from my cookbook, and I’m sharing it here because I love it. 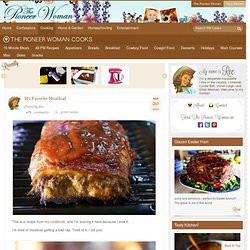 I’m tired of meatloaf getting a bad rap. Tired of it, I tell you! Within the pages of my cookbook, I proposed that people’s perception of meatloaf became permanently skewed when a certain disheveled rock singer burst on the scene back in the seventies…but after much consideration, I’ve decided that it’s actually the word “loaf” that has contributed the most to meatloaf being such a maligned food. You didn’t know my cookbook delved into such anthropological and sociological issues, did you? Don’t worry. So open your minds for a moment. See? Oops. It’s like in the movie “Somewhere in Time” where Christopher Reeve (rest his soul) is blissfully living in they year 1912, then discovers the 1979 penny in his pocket and is suddenly and violently sucked back to present day.

Chicken with Mustard Cream Sauce. This delectable, tangy, strange, creamy, and bold pan sauce is one of my favorites, and I’m getting ready to tell you why. 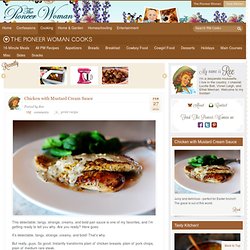 Are you ready? Here goes: It’s delectable, tangy, strange, creamy, and bold! Perfect Potato Soup. I’m Pioneer Woman and I have a confession to make. 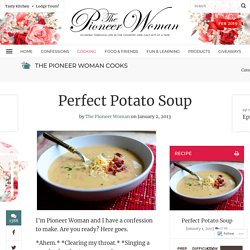 Are you ready? Here goes. *Ahem.* *Clearing my throat.* *Singing a couple of scales to warm up. Crash Hot Potatoes. Man, do I love Australia. 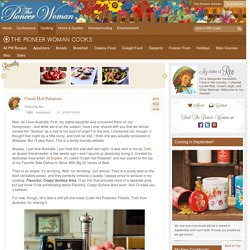 First, my oldest daughter was conceived there on our honeymoon…and while we’re on the subject, have I ever shared with you that we almost named her “Sydney” as a nod to her point of origin? Chicken Parmigiana. This is one of the go-to dishes I make for my family of six. 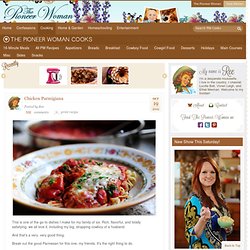 Rich, flavorful, and totally satisfying, we all love it, including my big, strapping cowboy of a husband. And that’s a very, very good thing. Break out the good Parmesan for this one, my friends. It’s the right thing to do. Begin with four to six boneless, skinless, trimmed chicken breasts. I’m actually beginning to believe fear of raw chicken is a diagnosable phobia.

Place the chicken breasts inside of a Ziploc bag—either one at a time or, if the bag is gigantic like this one, all at once. I put them inside Ziplocs so that when I pound the heck out of them here in a second, microscopic particles of raw chicken will not end up across the room on my computer’s keyboard. Now THAT would gross me out the door. Pound the chicken with the smooth side of a mallet. You want them to be very thin–about 1/8 to 1/4″ thick. Add the flour to a large plate. And pepper. Then season the other side. The raw chicken is almost over.