Top 100 Speeches of the 20th Century by Rank 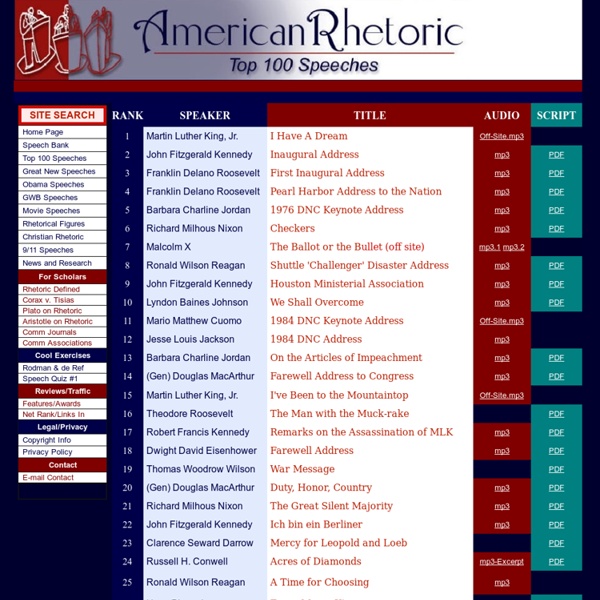 The secret to creativity, intelligence and scientific thinking: Being able to make connections 10.3K Flares Filament.io 10.3K Flares × When we shared this image from the @buffer Twitter account recently, it got me thinking. The Tweet resulted in over 1,000 retweets, which somehow was an indication that a lot of people seemed to agree with this statement. There’s a key difference between knowledge and experience and it’s best described like this: The original is from cartoonist Hugh MacLeod, who came up with such a brilliant way to express a concept that’s often not that easy to grasp. How Did Marijuana Become Illegal in the First Place? In less than a week a number of states will decide the fate of legalized or medical marijuana. While progress has been a long time coming locally there has been no sign marijuana will budge from its Schedule 1 status federally, which means that research into the plant’s therapeutic efficacy continues to suffer. It also means that the feds will keep intervening with state’s rights when they so choose. For a plant that humans have utilized for millennia—our brain’s endogenous cannabinoid receptors make us easy targets—restrictions are recent.

50 Ways to Use Twitter in the Classroom Many critics of Twitter believe that the 140-character microblog offered by the ubiquitous social network can do little for the education industry. They are wrong. K-12 teachers have taken advantage of Twitter’s format to keep their classes engaged and up-to-date on the latest technologies. The following projects provide you and your students with 50 ways to Twitter in the classroom to create important and lasting lessons. 1. Tweet about upcoming due dates or assignments. Robert F. Kennedy: Statement on Assassination of Martin Luther King, Jr. The following text is taken from a news release version of Robert F. Kennedy's statement. For more information please contact Kennedy.Library@nara.gov or 617.514.1629. Senator Robert F.

Magic and Mystery, Chaos and Complexity Paradox My dictionary says a paradox is a seemingly absurd or contradictory statement even if it is well founded. In life there are many things that appear absurd and contradictory that are in fact real and true. These paradoxes mean we live in a world of mystery where there is always something new to learn and experience. Every question answered opens up a new question to be solved. Tonight I will talk about some of those paradoxes and how they might help us understand the world we live in.

How to Close Your Speech With Power Your speech is going great. You’ve opened with a bang and have hit all your key points. As you look out at the audience, they are on the edge of their seats; they’re nodding, and engrossed with every word that you say. You’re about out of time, and you need to wrap it up. Results on ReadWriteThink Find content from Thinkfinity Partners using a visual bookmarking and sharing tool. More Your students can save their work with Student Interactives.

The Gettysburg Address: An Analysis On 19 November, we commemorate the anniversary of Abraham Lincoln’s Gettysburg Address in 1863. In one of the first posts on this blog, I compared Lincoln’s two-minute address with the two-hour oration by Edward Everett on the same occasion. Today, people regard the former as one of the most famous speeches in American history; the latter largely forgotten. Indeed, Everett himself recognized the genius of Lincoln’s speech in a note that he sent to the President shortly after the event: “I should be glad, if I could flatter myself that I came as near to the central idea of the occasion, in two hours, as you did in two minutes.”

Metacognition: The Gift That Keeps Giving Editor's note: This post is co-authored by Marcus Conyers who, with Donna Wilson, is co-developer of the M.S. and Ed.S. Brain-Based Teaching degree programs at Nova Southeastern University. They have written several books, including Five Big Ideas for Effective Teaching: Connecting Mind, Brain, and Education Research to Classroom Practice. Dana Schutz’s “Open Casket”: A Fraught Painting Sparks Fraught Calls for Its Destruction An art world controversy widely reported over the last week has rekindled the debate about left-wing-advocated censorship. Dana Schutz’s painting “Open Casket” — which depicts Emmett Till, the Mississippi teenager lynched in 1955 — has been met with heated protest, with calls not only for its removal from the Whitney Museum’s 2017 Biennial, but also for its destruction. The most prominent call to destroy the painting came from artist Hannah Black, who wrote a widely publicized open letter calling for the painting to be “removed, destroyed, and not entered into any market or museum.” The vehemence of the demand is specific to the hideous weight of the painting’s subject, but it also represents the sticky logical conclusion of current discursive trends. One floor above “Open Casket” at the Whitney, there’s another painting of a black man rendered black a body by white brutality.

Unconventional Presentation Tips to Wow Your Audience We’ve all heard the basic public speaking advice: Make eye contact, speak more slowly than you think you need to, tell a story. But what about the tips that go below the surface — tips that the pros have learned from giving countless presentations over the years? Turn to these three decks to take your speeches to the next level: Throw in Your Funny Bone United States (U.S.) Constitution for Kids — Activities, Quizzes, Puzzles, & More U.S. Constitution Activities Welcome to the Fun Zone at Constitutionfacts.com where you'll find U.S. Constitution Activities for all ages - from word finds to crossword puzzles to treasure hunts and more! U.S. Constitution for Kids (Grades K-4)