Killing dinner - Food traditions. After a tour of his garden, where tomatoes were bombing from the vines and melons lolled about like a bowling alley after close, my friend Shelby showed me his chickens. 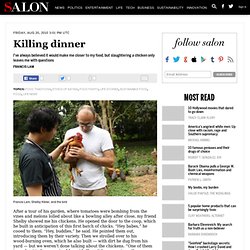 He opened the door to the coop, which he built in anticipation of this first batch of chicks. “Hey babes,” he cooed to them. “Hey, buddies,” he said. He pointed them out, introducing them by their variety. Then we strolled over to his wood-burning oven, which he also built — with dirt he dug from his yard — but we weren’t done talking about the chickens. I think the feeling I felt at that moment could be called excitement. I also have to admit that, in a world where we romanticize farmers and food artisans, there was a certain fantasy to it.

All week long, as I attended baking camp, I marveled at the yeasts and bacteria that we harness for bread, at the aliveness of bread. Saturday. Food Trends 2012: What We'll See In The Year Ahead. G. Roger Denson: Political Art Timeline, 1945-1966: Postwar Art of the Left. This is Part 2 of the Timeline of Left Political Art. 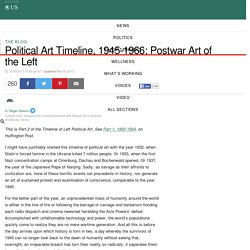 See Part 1, 1900-1944, on Huffington Post. I might have justifiably started this timeline of political art with the year 1932, when Stalin’s forced famine in the Ukraine killed 7 million people. Or 1933, when the first Nazi concentration camps at Orienburg, Dachau and Buchenwald opened. Or 1937, the year of the Japanese Rape of Nanjing. Sadly, as savage as their affronts to civilization are, none of these horrific events set precedents in history, nor generate an art of sustained protest and examination of conscience, comparable to the year 1945. For the better part of the year, an unprecedented mass of humanity around the world is either in the line of fire or following the barrage of carnage and barbarism flooding each radio dispatch and cinema newsreel heralding the Axis Powers’ defeat. Most demarcations of historical epochs are necessarily vague. 1950-53 In June of 1950, the Korean War breaks out. 1961-1989: Planners vs Public. A vow for 2011: No cheap chicken - Ethics of eating.

I was watching TV, and suddenly, to the shrieking strings of horror film music, there was thunder, lightning and breasts everywhere. 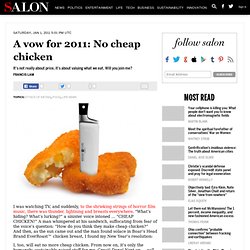 “What’s hiding? What’s lurking?” A sinister voice intoned … “CHEAP CHICKEN!” A man whimpered at his sandwich, suffocating from fear of the voice’s question: “How do you think they make cheap chicken?” And then, as the sun came out and the man found solace in Boar’s Head Brand EverRoast™ chicken breast, I found my New Year’s resolution: I, too, will eat no more cheap chicken. But wait. Algorithm. 20 Most Inspirational Quotes by Steve Jobs. Oct 6, 2011 The world lost a visionary yesterday. 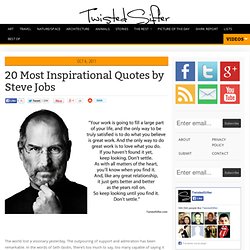 The outpouring of support and admiration has been remarkable. In the words of Seth Godin, ‘there’s too much to say, too many capable of saying it better than I ever could.’ So instead, the Sifter will remember these words of wisdom from Steve Jobs himself. Below are the 20 most inspirational quotes from a hungry and foolish man. “Here’s to the crazy ones. High dynamic range imaging. High-dynamic-range (HDR) image made out of three pictures. 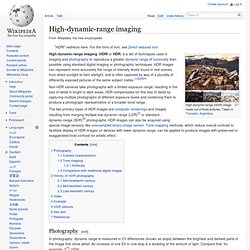 Taken in Tronador, Argentina. High-dynamic-range imaging (HDRI or HDR) is a set of techniques used in imaging and photography to reproduce a greater dynamic range of luminosity than possible using standard digital imaging or photographic techniques. HDR images can represent more accurately the range of intensity levels found in real scenes, from direct sunlight to faint starlight, and is often captured by way of a plurality of differently exposed pictures of the same subject matter.[1][2][3][4] Non-HDR cameras take photographs with a limited exposure range, resulting in the loss of detail in bright or dark areas. HDR compensates for this loss of detail by capturing multiple photographs at different exposure levels and combining them to produce a photograph representative of a broader tonal range. 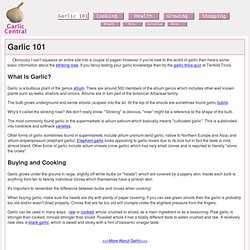 However if you're new to the world of garlic then here's some basic information about the stinking rose. If you fancy testing your garlic knowledge then try the garlic trivia quiz at Tenfold Trivia. What Is Garlic? Garlic is a bulbous plant of the genus allium. There are around 500 members of the allium genus which includes other well known plants such as leeks, shallots and onions. The bulb grows underground and sends shoots (scapes) into the air. Why's it called the stinking rose? The most commonly found garlic in the supermarkets is allium sativum which basically means "cultivated garlic". Other forms of garlic sometimes found in supermarkets include allium ursinum (wild garlic, native to Northern Europe and Asia) and allium ampeloprasum (elephant garlic).

Buying and Cooking Garlic grows under the ground in large, slightly off-white bulbs (or "heads") which are covered by a papery skin. >>>More About Garlic>>>