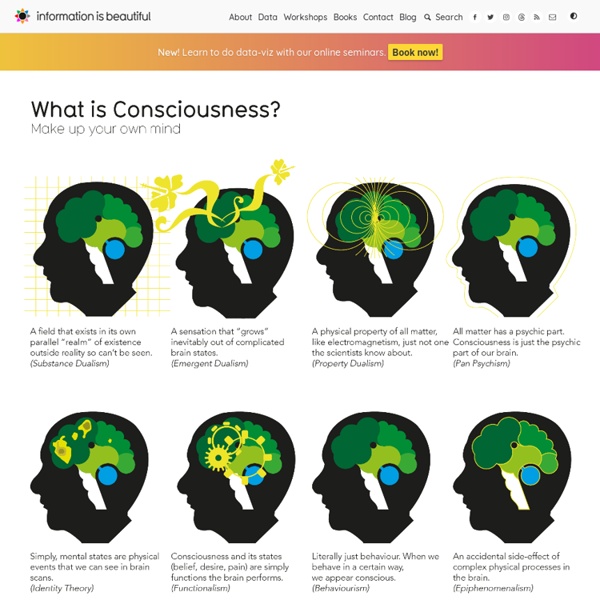 What cannabis actually does to your brain - io9 Chances are they would've ended up brainless morons with or without the pot. It's quite frankly not strong enough of a narcotic to destroy one's life such as you describe. It's very dependent on the user's persona. 50 Life Secrets and Tips Memorize something everyday.Not only will this leave your brain sharp and your memory functioning, you will also have a huge library of quotes to bust out at any moment. Poetry, sayings and philosophies are your best options.Constantly try to reduce your attachment to possessions.Those who are heavy-set with material desires will have a lot of trouble when their things are taken away from them or lost. Possessions do end up owning you, not the other way around.

Consciousness Search tips There are three kinds of search you can perform: All fields This mode searches for entries containing all the entered words in their title, author, date, comment field, or in any of many other fields showing on OPC pages. Surname Rare but Real: People Who Feel, Taste and Hear Color When Ingrid Carey says she feels colors, she does not mean she sees red, or feels blue, or is green with envy. She really does feel them. She can also taste them, and hear them, and smell them. The 20-year-old junior at the University of Maine has synesthesia, a rare neurological condition in which two or more of the senses entwine. Nine Things Successful People Do Differently - Heidi Grant Halvorson Learn more about the science of success with Heidi Grant Halvorson’s HBR Single, based on this blog post. Why have you been so successful in reaching some of your goals, but not others? If you aren’t sure, you are far from alone in your confusion.

Animal Thought By Temple Grandin, Ph.D. Department of Animal Science Colorado State University Western Horseman, Nov. 1997, pp.140-145 (Updated January 2015) Synesthesia How someone with synesthesia might perceive (not "see") certain letters and numbers. Synesthetes see characters just as others do (in whichever color actually displayed), yet simultaneously perceive colors as associated to each one. Synesthesia (also spelled synæsthesia or synaesthesia; from the Ancient Greek σύν syn, "together", and αἴσθησις aisthēsis, "sensation") is a neurological phenomenon in which stimulation of one sensory or cognitive pathway leads to automatic, involuntary experiences in a second sensory or cognitive pathway.[1][2][3][4] People who report such experiences are known as synesthetes. Difficulties have been recognized in adequately defining synesthesia:[5][6] many different phenomena have been included in the term synesthesia ("union of the senses"), and in many cases the terminology seems to be inaccurate. A more accurate term may be ideasthesia. Characteristics[edit]

Georges Lemaître Monseigneur Georges Henri Joseph Édouard Lemaître, (French: [ʒɔʁʒə ləmɛtʁ] ( ); 17 July 1894 – 20 June 1966) was a Belgian Roman Catholic priest, astronomer and professor of physics at the Université catholique de Louvain.[1] He was the first known academic to propose the theory of the expansion of the Universe, widely misattributed to Edwin Hubble.[2][3] He was also the first to derive what is now known as Hubble's law and made the first estimation of what is now called the Hubble constant, which he published in 1927, two years before Hubble's article.[4][5][6][7] Lemaître also proposed what became known as the Big Bang theory of the origin of the Universe, which he called his 'hypothesis of the primeval atom or the "Cosmic Egg".[8] Biography[edit] According to the Big Bang theory, the universe emerged from an extremely dense and hot state (singularity). Space itself has been expanding ever since, carrying galaxies with it, like raisins in a rising loaf of bread. Work[edit]

The Relativity of Wrong by Isaac Asimov I received a letter from a reader the other day. It was handwritten in crabbed penmanship so that it was very difficult to read. Nevertheless, I tried to make it out just in case it might prove to be important. In the first sentence, he told me he was majoring in English Literature, but felt he needed to teach me science. (I sighed a bit, for I knew very few English Lit majors who are equipped to teach me science, but I am very aware of the vast state of my ignorance and I am prepared to learn as much as I can from anyone, however low on the social scale, so I read on.)

Mind-reading scan identifies simple thoughts - health - 26 May 2011 A new new brain imaging system that can identify a subject's simple thoughts may lead to clearer diagnoses for Alzheimer's disease or schizophrenia – as well as possibly paving the way for reading people's minds. Michael Greicius at Stanford University in California and colleagues used functional magnetic resonance imaging (fMRI) to identify patterns of brain activity associated with different mental states. He asked 14 volunteers to do one of four tasks: sing songs silently to themselves; recall the events of the day; count backwards in threes; or simply relax. Participants were given a 10-minute period during which they had to do this. For the rest of that time they were free to think about whatever they liked.

9 Pictures That Prove Indians Are One Of The Most Innovative People In The World Indians are probably the most innovative people in the world. Why do I say this? Well sure, people all over the world are innovative. But nowhere does innovation blossom in as adverse circumstances and with as few resources as it does in India. Call it inventiveness or jugaad, but Indian innovation is a force to be reckoned with in situations both big and small. The really free schools are online - Features, Gadgets & Tech But can a quality education be delivered online? And, more to the point, how much would it cost? In just over a month's time (10 October), Stanford University is launching three free online courses – Introduction to Artificial Intelligence, Introduction to Databases and Machine Learning – that are open to all, taught by eminent scientists, involve study, homework and exams, and are rewarded with a "statement of accomplishment", should you complete them.

The Question of Free Will Advances in brain science are calling into question the volition behind many criminal acts. A leading neuroscientist describes how the foundations of our criminal-justice system are beginning to crumble, and proposes a new way forward for law and order. On the steamy first day of August 1966, Charles Whitman took an elevator to the top floor of the University of Texas Tower in Austin. The 25-year-old climbed the stairs to the observation deck, lugging with him a footlocker full of guns and ammunition. At the top, he killed a receptionist with the butt of his rifle. Two families of tourists came up the stairwell; he shot at them at point-blank range.