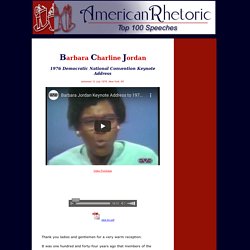 It was one hundred and forty-four years ago that members of the Democratic Party first met in convention to select a Presidential candidate. I, Barbara Jordan, am a keynote speaker. When -- A lot of years passed since 1832, and during that time it would have been most unusual for any national political party to ask a Barbara Jordan to deliver a keynote address. Now -- Now that I have this grand distinction, what in the world am I supposed to say? We are a people in a quandary about the present.

Throughout -- Throughout our history, when people have looked for new ways to solve their problems and to uphold the principles of this nation, many times they have turned to political parties. Now what are these beliefs? We -- We are a party -- We are a party of innovation. "Give Me Liberty Or Give Me Death!" I have but one lamp by which my feet are guided; and that is the lamp of experience. 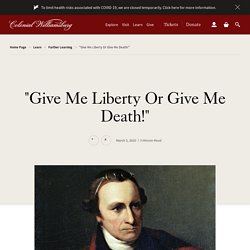 I know of no way of judging of the future but by the past. And judging by the past, I wish to know what there has been in the conduct of the British ministry for the last ten years, to justify those hopes with which gentlemen have been pleased to solace themselves, and the House? Is it that insidious smile with which our petition has been lately received? Trust it not, sir; it will prove a snare to your feet. Reagan’s "Tear down this wall" analyzed. Twenty one years ago today, East German authorities opened their border to West Berlin. 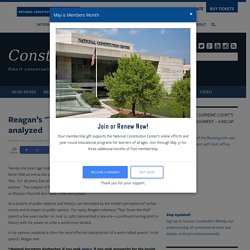 The Berlin Wall served as the symbolic divide between democracy and communism during the Cold War. For 28 years, East and West Germans were prohibited from communicating with one another. The collapse of the Berlin Wall led to Germany’s emotional reunification, and reversed, as Winston Churchill described—“the iron curtain.” As a student of public relations and history, I am fascinated by the media’s perception of certain events and its impact on public opinion. "What to the Slave Is the Fourth of July?" - Teaching American History. Mr. 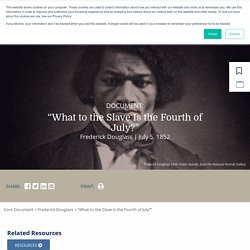 President, Friends and Fellow Citizens: He who could address this audience without a quailing sensation, has stronger nerves than I have. I do not remember ever to have appeared as a speaker before any assembly more shrinkingly, nor with greater distrust of my ability, than I do this day. A feeling has crept over me, quite unfavorable to the exercise of my limited powers of speech. The task before me is one which requires much previous thought and study for its proper performance. 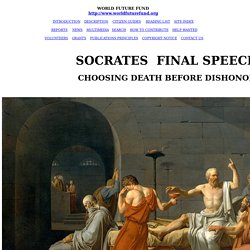 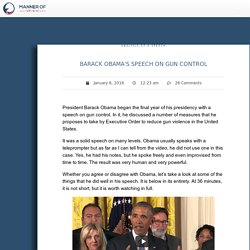 It was a solid speech on many levels. Whether you agree or disagree with Obama, let’s take a look at some of the things that he did well in his speech. The Gettysburg Address: An Analysis. On 19 November, we commemorate the anniversary of Abraham Lincoln’s Gettysburg Address in 1863. In one of the first posts on this blog, I compared Lincoln’s two-minute address with the two-hour oration by Edward Everett on the same occasion. Today, people regard the former as one of the most famous speeches in American history; the latter largely forgotten. Indeed, Everett himself recognized the genius of Lincoln’s speech in a note that he sent to the President shortly after the event: “I should be glad, if I could flatter myself that I came as near to the central idea of the occasion, in two hours, as you did in two minutes.”

Abraham Lincoln. Robert F. Kennedy: Statement on Assassination of Martin Luther King, Jr. The following text is taken from a news release version of Robert F. Kennedy's statement. For more information please contact Kennedy.Library@nara.gov or 617.514.1629. Senator Robert F. Kennedy Indianapolis, Indiana April 4, 1968 Listen to this speech. I have bad news for you, for all of our fellow citizens, and people who love peace all over the world, and that is that Martin Luther King was shot and killed tonight. Martin Luther King dedicated his life to love and to justice for his fellow human beings, and he died because of that effort. In this difficult day, in this difficult time for the United States, it is perhaps well to ask what kind of a nation we are and what direction we want to move in. Examples of Parallelism in Literature and Rhetoric.

TED Talk: The secret structure of great talks. What Made “I Have A Dream” Such A Perfect Speech. American Rhetoric: The Power of Oratory in the United States. Top 100 Speeches of the 20th Century by Rank.