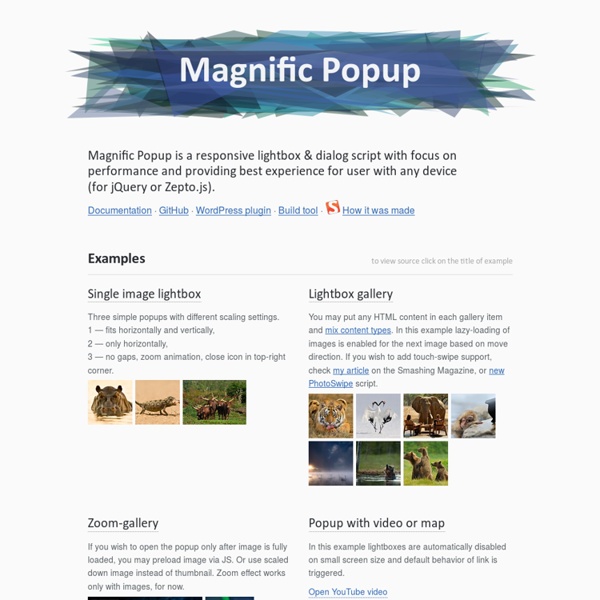 Magnific Popup is a responsive lightbox & dialog script with focus on performance and providing best experience for user with any device(for jQuery or Zepto.js). Examples Single image lightbox Three simple popups with different scaling settings. 1 — fits horizontally and vertically, 2 — only horizontally, 3 — no gaps, zoom animation, close icon in top-right corner. Lightbox gallery You may put any HTML content in each gallery item and mix content types. Zoom-gallery If you wish to open the popup only after image is fully loaded, you may preload image via JS. Popup with video or map In this example lightboxes are automatically disabled on small screen size and default behavior of link is triggered. Dialog with CSS animation Animations are added with simple CSS transitions, you can make them look however you wish.More animation effects on CodePen. Popup with form Entered data is not lost if you open and close the popup or if you go to another page and then press back browser button. Ajax popup Fast

Selectize.js Current Value: "awesome,neat" Add and remove items in any order without touching your mouse. Use your left/right arrow keys to move the caret (ibeam) between items. This example is instantiated from a <input type="text"> element (note that the value is represented as a string). Current Value: null This demonstrates two main things: (1) custom item and option rendering, and (2) item creation on-the-fly.

Tooltipster - The jQuery Tooltip Plugin Styling your tooltips with a custom look ⇑ Tooltipster makes it very easy to go from one of the packaged themes and customize a few properties of your choice. To do so, we recommend that you create a so-called "secondary theme" which will override some properties of a packaged theme. Create a new css file and include it in your page. Inside the file, declare your customized rules like this: For your secondary theme to be applied, provide an array of themes instead of just one.

Website speed test Nobody Likes a Slow Website We built this Website Speed Test to help you analyze the load speed of your websites and learn how to make them faster. It lets you identify what about a web page is fast, slow, too big, what best practices you’re not following, and so on. We have tried to make it useful both to experts and novices alike. 50 Must-have plugins for extending Twitter Bootstrap Martin Angelov You most certainly know about Twitter Bootstrap – the popular front end framework for building websites and apps. It favors simple, responsive design, and comes bundled with a sensible default stylesheet, a number of useful jQuery plugins and an icon set. Fine Uploader Live Demo and Javascript Code Examples Basic Setup Want to upload files to your own server? You need only to include a CSS file, a JavaScript file, and handle the uploads on the server side according to the technology you are using. There are absolutely no other dependencies. You can quickly set up an HTML page in order to use Fine Uploader: Download and unpack the latest version of Fine Uploader.

jQuery plugin for Avgrund concept popin Avgrund is a jQuery plugin for modal boxes and popups. It uses interesting concept showing depth between popup and page. It works in all modern browsers and gracefully degrade in those that do not support CSS transitions and transformations (e.g. in IE 6-9 has standard behavior). Tested with jQuery 1.4+, file size is under 2Kb, MIT Licensed. You can simply init Avgrund with one line and linking 'avgrund.css' file: $('element').avgrund();

CSS Sprites: Image Slicing’s Kiss of Death Back when video games were still fun (we’re talking about the 8-bit glory days here), graphics were a much simpler matter by necessity. Bitmapped 2-dimensional character data and background scenery was individually drawn, much like today’s resurgent pixel art. Hundreds and later thousands of small graphics called sprites were the building blocks for all things visual in a game. Article Continues Below Scaffolding Requires HTML5 doctype Bootstrap makes use of certain HTML elements and CSS properties that require the use of the HTML5 doctype. Include it at the beginning of all your projects.