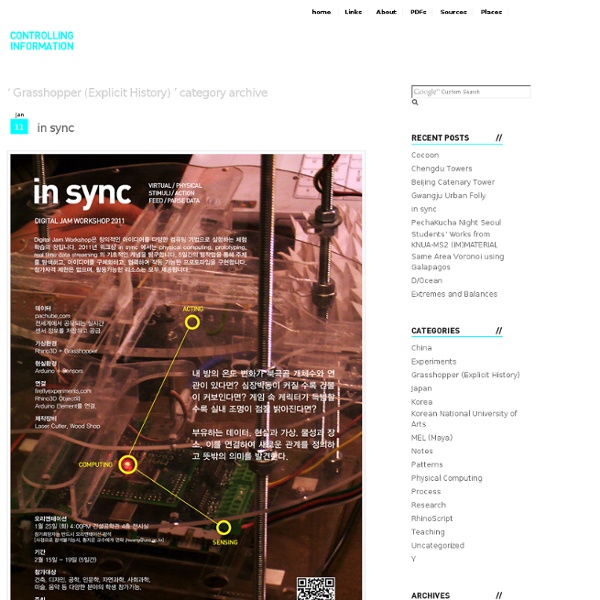 Same Area Voronoi using Galapagos I have been quite fascinated by the recent development of Galapagos for Grasshopper. This is a simple example of its application set up to solve for a 10-point voronoi division within a user-defined boundary where all the parts are divided as equally as possible in terms of their areas. I ran this with an initial population of a hundred for 200 generations. The results are not 100% perfect, but very close (which is the nature of an evolutionary solver I believe). Gradient Patterns Testing different patterns with grasshopper. Pagora Bench Playing with hopper and Maxwell 2 Two Surfaces Twisted Box It’s been a while I’ve played with Grasshopper. In order to use the definition, first define a box, and some geometries within the box as your base component. Two Surface Space Frame (Rhino Explicit History) Ah so, the new version of the Explicit History plug-in for Rhino is out. crtli_gh_space_frame.wrmcrtli_gh_space_frame.3dm

The Unexpected Way Philosophy Majors Are Changing The World Of Business 25Share Synopsis Here are a few reasons that philosophy majors will become the entrepreneurs who are shaping the business world. Dr. Damon Horowitz quit his technology job and got a Ph.D. in philosophy -- and he thinks you should too. "If you are at all disposed to question what's around you, you'll start to see that there appear to be cracks in the bubble," Horowitz said in a 2011 talk at Stanford. As Horowitz demonstrates, a degree in philosophy can be useful for professions beyond a career in academia. Despite a growing media interest in the study of philosophy and dramatically increasing enrollment in philosophy programs at some universities, the subject is still frequently dismissed as outmoded and impractical, removed from the everyday world and relegated to the loftiest of ivory towers. That doesn't fit with the realities of both the business and tech worlds, where philosophy has proved itself to be not only relevant but often the cornerstone of great innovation.

P1010042 psudigitalbeehive | An architecture students resource to improving digital communication + presentation + fabrication skills Marilyn Jordan Taylor, Dean and Paley Professor | PennDesign | Marilyn Jordan Taylor, Dean and Paley Professor Academic Year 2011 - 2012 GOALS, PRIORITIES, AND INITIATIVESSeptember 7, 2011 I'm very pleased to take this opportunity to set forth the goals and initiatives for the School of Design in the academic year 2011-2012. In doing so, I hope to engage each and every one of you--students, staff, alumni, faculty, university colleagues, overseers, trustees, and friends--in achieving our extraordinary potential. As a school, our primary objective is to give our students--of all ages and across all the design disciplines--the perspectives, skills, and experiences that will help them meet the opportunities and demands of a changing and challenged, urbanizing world. Goal 1: Advance our visibility and influence through thought leadership, international engagement, and strategic communications. Here are three specific approaches that we will emphasize and showcase in the coming year. - Thought leadership. Among the areas where we at PennDesign can move to the forefront of thinking are

a lesson on digital topography Part 1. Finding DataPart 2. GISPart 3. Zooming inPart 4. Generating MeshPart 5. UPDATE : The GH definition has been replaced with a Rhino Python Script that runs significantly faster and will handle much bigger files. Since I literally have to re-teach this every time I get a new group of students, I figured it might be easier if I just put my lesson online. As an architect who’s concerned with the interaction between our built and our ecological environment, we often need to negotiate design intent and desires with existing conditions. Generating a good topo is a common task in architecture, urban design, and landscape architecture. We will be using QGIS, Rhino 3D / Grasshopper 3D, Photoshop / GIMP, Multispec in this lesson. NOTE: You will see screen grabs from my OS such as Windows, OSX, Linux, that is to illustrate the fact that this process is independent on your OS, for the most part. 1. 1a. 1b. 1c. 1d. 1e. 1f. 1g. 1h. 1i. 2. 2a. 2b. 2c. 2d. 2e. 2f. 2g. 2h.

Tutorials Introduction to Grasshopper Videos by David Rutten. Wondering how to get started with Grasshopper? Look no further. Spend an some time with the creator of Grasshopper, David Rutten, to learn the fundamental of Grasshopper. Dario Donato director di SpatialConnection(s), incubatore di ricerca per una creatività matematica, ha il piacere di annunciare il libro: Contaminazioni creative digitali – Trascrizioni di una complessità algoritmica attraverso Rhino.Grasshopper Transcripts of a complexity algorithmic through Rhino and Grasshopper. If you’re looking for a nice collection of Grasshopper tutorials then jump over to Designalyze Here are a series of beginner and advanced tutorials from our friends at Studio Mode... This tutorial series was developed for the Design Studio AIR at the University of Melbourne, Faculty of Architecture, Building and Planning. Versione italiana del tutorial Essential Mathematics, tradotta da Nando Varriale Essential Mathematics 2nd Edition in Korean

RHINO: GRASSHOPPER DEFINITIONS - RHINO / GH This definition was developed for my final thesis project to generate a louver system based on functional requirements within the building. The performance was then tested in Ecotect. A large part of my thesis design involved invertible arena seating with many moving parts. I used Grasshopper as a means to develop the seating testing clearances, site lines, and many other variables. This definition looks at taking any curved surface, and generating weaving geometry across it. The parametric skyscraper uses Grasshopper to generate the entire structure. My favorite definition to date, this definition generates box designs based on real boxes I crafted in the wood shop while in Grad school This definition extrudes geometry based on their proximity to a polyline attractor. Using a definition created by paramod, I wanted to see if I could edit the definition so that different panels could be combined to create a seamless surface This was one of the first definitions from scratch I ever created.

Co-de-iT | Computational Design Italy grasshopper code . a collection of codes & grammars for Grasshopper, a generative modeling tool for Rhinoceros. 3D Hilbert Curve This definition generates a 3D Hilbert Curve, a continuous fractal space-filling curve. 3D_Hilbert_Curve_Co-de-iT_1.0007.zip nGon mesh tessellation Starting from a closed surface it builds a nGon mesh tessellation nGon_tessellation_Co-de-iT_1.0007.zip Curves Sorter Starting from a list of curves it takes the first one then it looks for the closest curve and it eventually flips the direction to optimize the toolpath lenght. Curves_Sorter_Co-de-iT_1.0007.zip froGH A sparse collection of tools for Grasshopper. See the code, explanation and download here. Clusterizer This definition groups indexes of connected points into separate clusters. Clusterizer_Co-de-iT_0.9.0076.zip Spirograph This definition simulates a spirograph tool. Spirograph_Co-de-iT_0.9.0076.zip 3D Differential mesh relaxation This definition explores the 3D relaxation of a mesh effected by an image gradient. Vorospace Math surfaces .