An exploration of Paratonic Surfaces in Architecture 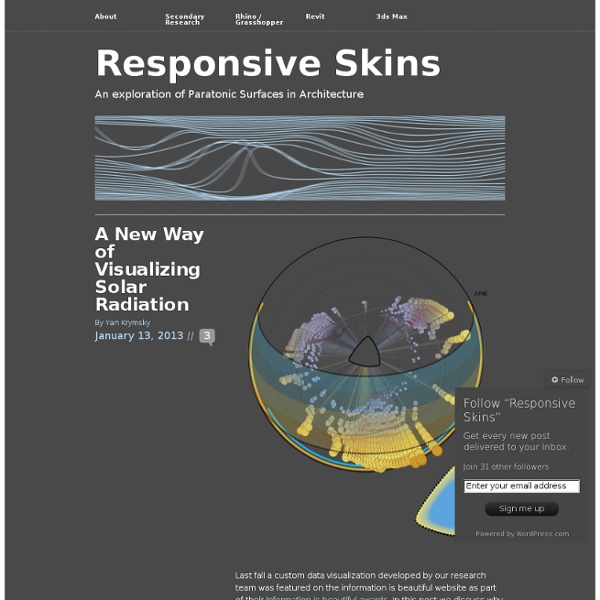 Grasshopper | Geometric Mind This grasshopper definition is to create a Hyperbolic tower with helix partition. 01 concept There are two features in this definition, first one is to use ‘function’ component to create geometry. The concept is explained in the image above. Basically, there are doughnut like floors through the whole tower, each has the same area. This was enabled by ‘function 2′ component that inputs are the area of the outer circles and the floor area you want. Enjoy grasshoppering. 02 Grasshopper definition tower in Rhino Tower in Rhino 02 This post is about how to create diagrid on a surface by exploiting tree structure. The tutorial shows how to turn ‘tree data structure’ into a ‘single list’ by ‘flattening’ and ‘restructuring’ it into s tree structure with lists of ‘four points’. This is what rhino will show according to the grasshopper logic. Close up view of H-beams. Say we want to draw lines between the points on each curve. Dynamic Building simulator from MIT Mobile Experience Lab on Vimeo. List Item

BENV2426 - EXPERIMENTAL MODELLING | nikko sudirman - architecture and design 12 Iterations AND 3D Print Model Final Grasshoper Definition Progress Update 3 Upon consultation with Jeremy I have refined my design to incorporate the initial ideas generated from my proposal report. Initially I found difficulties in finding the required grasshopper definition to create 3 towers that respond and deform dependent on attractor points located on plane x,y & z. With the help from Jeremy I have altered the form to correspond to similar attractor points for each individual tower. Progress Update 2 Initially I wanted to develop a skin that would be of light material and display a fluid motion molded onto the built form. Images below illustrate the morphing; Progress Stage Update 1 1. 2. 3. 4. Wk10 - Progress The residential buildings to the right side of the polyline redefines the site to display a curved surface which is deformed and managed by 4 attractor points on the polyline. Final 12 Sources - Refined Aspect of Design Main Review: 5 Supporting Sources: Lexicon Words/Phrases 1. 3.

Parametric Tower Experiment [Grasshopper] A design exercise made to understand the parametric principles that may apply in the design of a tower structure, in this case I took as a reference for this particular exercise the Canton Tower designed by IBA Architects , which characterizes for using curved and inclined structures instead of the conventional straight structures used conventionally for skyscrapers. The result of the exercise is a tool that allows the designer to quickly generate tower structures that obey a parametric logic between its components , among the things the user can change are: *The Height of the structure *Size of the tower core *Rotation angle of the upper profile curve *Distance Between slabs *Height of slabs *Number and Radius of Main columns *Number of Secondary columns. This were the elements or properties I thought would define the basic shape of this particular project however , more functions and parameters can be added to make more precise models. GH Concepts Covered:

Jason Kirchhoff Tower Challenge - Design Vignette My tower is based largely on what Eve posted on her page. One difference is that I allow the user to specify the floor area and then pick a number of sides. The file then generates a regular polygon with that number of sides and the specified area. This allows the designer to try out different building shapes while maintaining a specified rentable area. The geometry is based on an inscribed and circumsribed circle for the polygon. My grasshopper file is here. Solar Responsive Architecture I took a slightly different approach than some of the others who have posted the assignment. My grasshopper file is here Space Truss Assignment My grasshopper file is here. I primarily used the method we went over in class to subdivide and explode a surface.

March 2009 At the moment, this is how I would explain the geometry of the 5 cases of elastic bending (see previous post): Case #1 This one follows the elastica curve, which means the curvature varies with the sin of distance along the curve (explanation here). The curve equals half a cycle of Sin (180 degrees) which means the curvature will be zero at start point and endpoint. [EDIT 2010-06-13] This case probably involves the Cornu spiral (clothoid), see here and here. Case #2 This is probably* a part of a clothoid curve (Cornu spiral). Case #4 This is a helix. Case #5 This is a conic plank line, which means it has the shape of a thin (straight) strip that has been wrapped around a cone. Workshop 10 Notes Within Grasshopper, go to the "Params" tab and within the "Geometry" area, select and drag two point icons into the work area. Right-click on each of the two points and use the "set on point" option to connect them to the points created on the x, y plane. Next, similarly to "Hello World" example above, go the "Math" tab and within the "Script" area drag a "VB" component into the Grasshopper View window. Connect the the points to the " x" and "y" input ports of the VB script component. Zoom up to "x" variable, right-click on it and in the top line of the dialog box that follows, change the name to " point1". Right click on "point1" again and change the Type hint option to "Point3d". Double-click on "VB" of the VB scripting component, to go to the script editor, and add the following expressions: Add the following comment lines at the beginning of the script: 'Draws a line from two points 'INPUTS: Two points 'OUTPUT: A line determined by the two points Dim cornerPts As New Point3dList 3. next