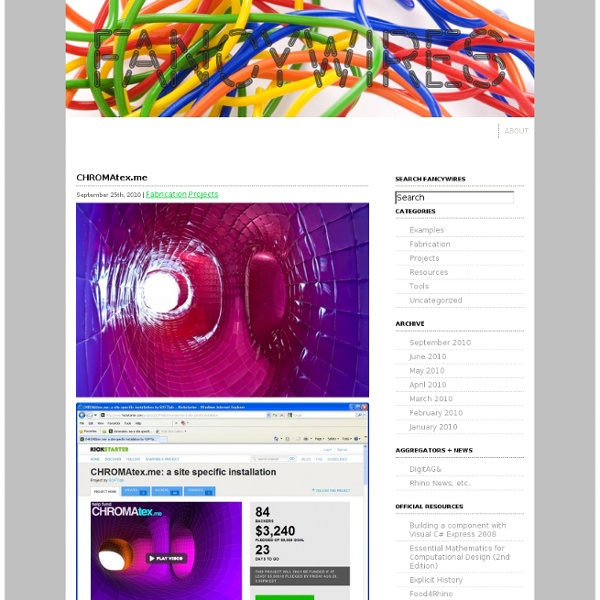 LaN / LIVE ARCHITECTURE NETWORK | global locale flower_Window Pattern(rhinoScript + grasshopper + weaverbird + pointReconstruction) 很簡單的運用三種基本的Rhino外掛加上RhinoScript Grasshopper, WeaverBird, pointReconstruction 所形成的變化形牆壁 有點像中國的花窗形式 Simply using the three basic Rhino Plug-in Grasshopper, WeaverBird, pointReconstruction, and RhinoScript to create the pattern wall which is familiar with traditional Chinese windows. 首先 先使用RhinoScript在平面上產生亂數的點 生成2D的Voronoi線段 將這些線段利用"surface from planar curve"的指令 產生面之後 再透過Mesh from Surface/Polygon的指令 將Surface變成Mesh 最後再送到grasshopper裡面 進行WeaverBird的處理部分 First, using the rhinoScript to populate random points on plan. to get the outlines. Third, we use these outlines to make the surface with "surface from planar curve" and transfer them into mesh by "Mesh from Surface/Polygon." After All, we send these meshes to the grasshopper and use the weaver bird to get the pattern. 先試著用長形的來操作 調整第一個D前面的Slider可以調整開口大小 Changing the slider of the first "D", we can control the size of the opening Render 再來試著在同一塊平面Voronoi上 將其分割並給訂不同開口大小 亦會產生有趣的紋理 Then we try to divide the Voronoi into separate parts to create interesting Pattern.

Digital [Sub]stance | Architecture +Design + Computation PET_LAB — open source design research laboratory After a semester of intense work the students of Marc Fornes’, Stephan Henrich’s and Francois Roche’s (n)certainties studio presented their final work today at usc. The studio opened a new territory for usc by venturing deeply into a speculative realm of materiality, technology and ultimately architecture. Subversively leaving the bounds of what at usc is called a ‘comprehensive building design’, the studio allowed for the in depth investigation of designs schemes on the level of proto architecture. Forays into materials and conceptual designs of robots provided the pre text for developing liberating narratives for speculations on architectural fictions. These were developed and presented through highly suggestive drawings, that on the one hand where indulging and seductively beautiful; and on the other as Cedric Prize would say became ‘an integral part of the architecture they portray rather than a cypher for thoughts translated elsewhere, and by other means.’

Co-de-iT | Computational Design Italy WALLACE Rhino ++ Grasshopper – Plethora Project Plethora-Project.com is an initiative to accelerate computational literacy in the frame of architecture and design. It aligns with the "show me your screens" motto of the TopLap live-coding group attempting to get rid of Obscurantism in digital design. Directed by Jose Sanchez Contact me at : jomasan@gmail.com Bio: Jose Sanchez is an Architect / Programmer / Game Designer based in Los Angeles, California. He is partner at Bloom Games, start-up built upon the BLOOM project, winner of the WONDER SERIES hosted by the City of London for the London 2012 Olympics. He is the director of the Plethora Project (www.plethora-project.com), a research and learning project investing in the future of on-line open-source knowledge.