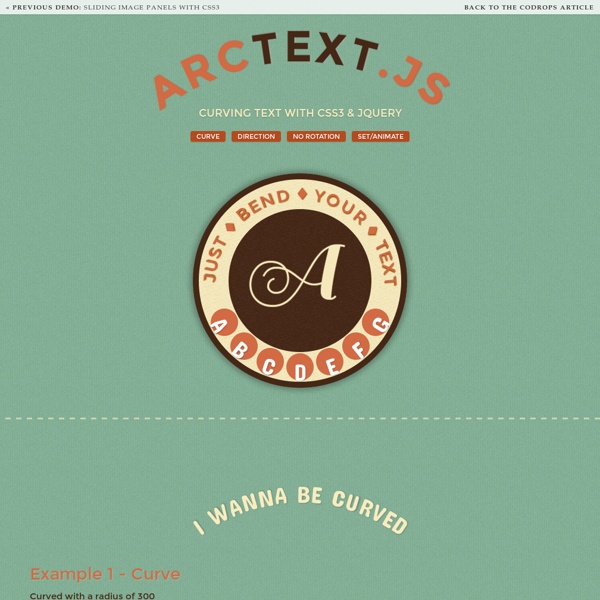 tubular, a YouTube Background Player jQuery Plugin | Sean McCambridge Design Video controls:Play | Pause | Volume Up | Volume Down | Mute Tubular is a jQuery plugin that lets you set a YouTube video as your page background. Just attach it to your page wrapper element, set some options, and you're on your way. $(page content wrapper element).tubular(options); Tubular's hello, world Assuming you're happy with the default options and you use a wrapper div with the id of wrapper, you simply attach to your wrapper div and specify the video you want to load: and Presto! A word of caution Tubular does not design your website for you. Options and defaults ratio: 16/9 // usually either 4/3 or 16/9 -- tweak as needed videoId: 'ZCAnLxRvNNc' // toy robot in space is a good default, no?

Adipoli jQuery Image Hover Plugin - Cube3x How To Use Enabling image hover effect is very simple. Place the below references inside your head tag. If you need image hover on an image with id ‘image1′, call adipoli plugin like this: <script> $('#image1').adipoli(); </script> Adding Options: Available Options startEffect : Default style of imagehoverEffect : Image style on mouse overimageOpacity : opacity of image considered when start effect is transparent or overlayanimSpeed : Animation speed for the effectfillColor : Overlay colortextColor : Text ColoroverlayText : Default HTML to be displayed on overlayslices : Number of slices for slice animationsboxCols : Number of boxes in a row for box animationsboxRows : Number of rows for box animationspopOutMargin : Margin of Image popoutpopOutShadow : Shadow length of popout image. Start Effects: transparentnormaloverlaygrayscale Hover Effects: Change Log Version 2.0 Added grayscale startEffectMoved code to github Do you want to know

tiltShift.js - a jQuery plugin using CSS3 filters to replicate the tilt shift effect download Download here or go to github. Released under GPL how to use Call the plugin on any collection of images you want by adding the following jQuery: jQuery(document).ready(function() { $('.tiltshift').tiltShift(); }); Parameters on each image must be set using the HTML5 data attributes, like this: The attributes will control various variables that influence the tiltshift effect. -position (0-100), defines the point of focus. 66 would be two thirds of the way in. notes As previously stated, currently only supported by Chrome & Safari 6. authors tiltShift.js is brought to you by Noel Tock, a WordPress, front-end and startup dude. Additional code by Adam Yanalunas, a dude who is passionate about stuff and things … especially front-end development stuff and JavaScript things. photo credits If you're interested in licensing any of the images, please contact the photographers by following the links below: Airplane / Stadium / Ocean / Skyscraper

Nasıl? jQuery plugin for Avgrund concept popin Avgrund is a jQuery plugin for modal boxes and popups. It uses interesting concept showing depth between popup and page. It works in all modern browsers and gracefully degrade in those that do not support CSS transitions and transformations (e.g. in IE 6-9 has standard behavior). You can simply init Avgrund with one line and linking 'avgrund.css' file: $('element').avgrund(); Avgrund has several options for you to customize it easily: Avgrund plugin was inspired by Hakim's Avgrund.js demo. jQuery PointPoint – A Plugin For Pointing To Things Martin Angelov Web designers find themselves in a tough situation – they have to build beautiful user interfaces that are intuitive and usable in the same time. Sometimes, despite our earnest efforts, web applications may become difficult to use for novice users. One solution is to create some sort of a tour of your application’s features. In this tutorial, we will be writing a jQuery plugin that will help you draw users’ attention to a specific part of the page, in the form of a small arrow that is displayed next to their mouse cursor. How it works Lets dive straight to the code – it comes at around 100 lines (with comments), so it is not difficult to follow. jquery.pointpoint.js When you call pointPoint(), it creates an event listener for the mousemove event. I am also using the transform.js CSS hooks for jQuery, which level the support for CSS3 rotations in browsers that support them (this means the plugin will not work in IE678). jQuery PointPoint Plugin How to use it We are done! jQuery

Magnific Popup: Responsive jQuery Lightbox Plugin Magnific Popup is a responsive lightbox & dialog script with focus on performance and providing best experience for user with any device(for jQuery or Zepto.js). Examples Single image lightbox Three simple popups with different scaling settings. 1 — fits horizontally and vertically, 2 — only horizontally, 3 — no gaps, zoom animation, close icon in top-right corner. Lightbox gallery You may put any HTML content in each gallery item and mix content types. Zoom-gallery If you wish to open the popup only after image is fully loaded, you may preload image via JS. Popup with video or map In this example lightboxes are automatically disabled on small screen size and default behavior of link is triggered. Dialog with CSS animation Animations are added with simple CSS transitions, you can make them look however you wish.More animation effects on CodePen. Popup with form Entered data is not lost if you open and close the popup or if you go to another page and then press back browser button. Ajax popup Fast