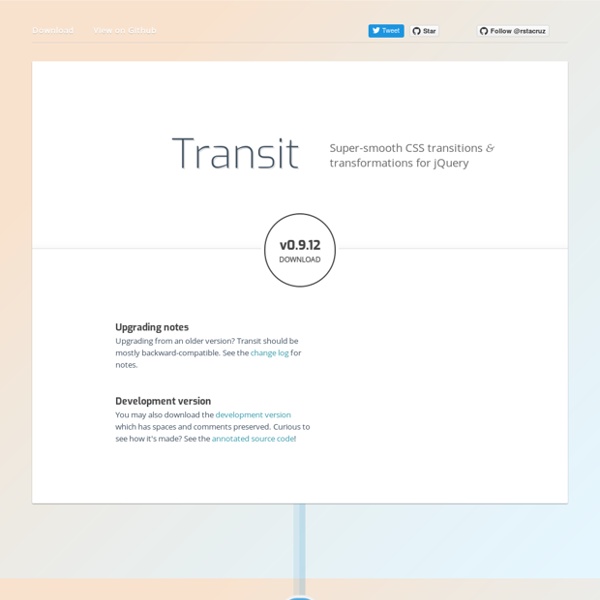 What about older browsers? Transit degrades older browsers by simply not doing the transformations (rotate, scale, etc) while still doing standard CSS (opacity, marginLeft, etc) without any animation. Delays and durations will be ignored. // Delegate .transition() calls to .animate()// if the browser can't do CSS transitions.if (!$.support.transition) $.fn.transition = $.fn.animate; Fallback to frame-based animation If you would like to fallback to classic animation when transitions aren't supported, just manually redefine .transitition to .animate. (Note: if you're using custom easing, you may need to also use jQuery Easing, and restrict your use of easing options to the ones defined there.) $.fx.speeds. Default duration Transit honors jQuery's default speed, $.fx.speeds. Custom easing Define custom easing aliases in $.cssEase. Webkit: prevent flickers Having flickering problems in Webkit? Antialias problems in Webkit? Force hardware-acceleration in Webkits to prevent text flickering.

12 Common CSS Mistakes Web Developers Make Let’s get real for a second here. As far as web languages go, CSS is arguably the simplest. I mean, really, what could be easier than a simple list of properties affecting an element? And the syntax is almost like written English. gmap : Smashinglabs What is gMap? gMap is a jQuery plugin embedding Google Maps into your website. It allows you to:

20 stunning examples of CSS3 animation Used well, CSS animation is an incredibly useful and powerful tool. It can add interest or creative excitement, direct the user's eye, explain something quickly and succinctly, and improve usability. For that reason, recent years have seen more and more animation on sites and in app. In this article, we round up some of the coolest CSS animation examples we've seen, and show you how to recreate them. CSS3 Animation Cheat Sheet - Justin Aguilar How it works The CSS3 Animation Cheat Sheet is a set of preset, plug-and-play animations for your web projects. All you need to do is add the stylesheet to your website and apply the premade CSS classes to the elements you want animated. The CSS3 Animation Cheat Sheet uses CSS3 @keyframes and works on all the latest browsers (that's IE 10). Using CSS3 @keyframes, you don't have to worry about positioning the element to accomodate the animations - it will animate into place.

Making an animated radial menu with CSS3 and JavaScript Today, let’s look at how we can easily make a simple animated radial menu with CSS3 and JavaScript. Have a look at the demo below and click the button for the radial menu to pop out. The code is readily available in the codepen demo above, so let’s go over some of the specifics. The HTML Inspiration for Article Intro Effects Some inspiration for effects applied to title headers of articles with a fullscreen image. The idea is to show some creative transition when continuing to the article body. View demo Download source Today we want to share some inspiration for article intro effects with you. You have surely seen some interesting article headers, usually containing a fullscreen image, that have some sort of intro effect, i.e. where some creative transition happens when scrolling or when clicking on a button to continue.

Sprite CSS Generator — a script plugin for Adobe Illustrator If you’ve never heard of sprites, have a look at css-tricks.com/css-sprites/. Open a new Adobe Illustrator document or create an new artboard within an existing one.Choose File > Scripts > Sprite CSS Generator to open the “Sprite CSS Generator” palette window. On the palette window you’ll find three sections and two buttons: Spritepath CSS Animated Hamburger Icon · Elijah Manor 04 Mar 2014 Problem I’ve been working more on mobile web these days and thought it would be fun to animate the prolific hamburger nav icon. Non-Animated CSS Hamburger Icon You could use Font Awesome or an image to represent the hamburger, but those aren’t necessary.