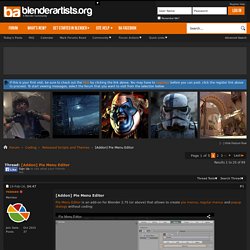 There's some stuff I don't even know how you did (hardness?!). It must have taken you a really long time setting it up, but could you share it? [Addon] Animation Nodes. This is the official Thread for the Animation Nodes Addon.With this addon you are able to make procedual animations in just a few minutes. 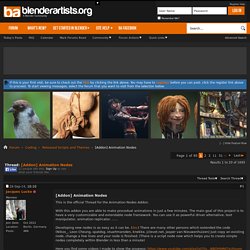 The main goal of this project is to have a very customizable and extendable node framework. You can use it as powerful driver alternative, text manipulator, animation replicator, ......Developing new nodes is as easy as it can be. (doc) There are many other persons which extended the code (Nikos_, Leon Cheung, spatdsg, stuartmarsden, knekke, jclevet.net, Jasper van Nieuwenhuizen) Just copy an existing node, change a few lines and your node is finished. Review: Animation Nodes Addon. Nicolas Priniotakis has written a monster review of the freely available Animation Nodes Addon and finds it seriously powerful and addictive. 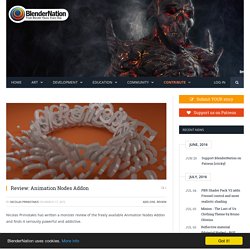 Thanks for such a wonderfully in-depth article Nicolas, it's the longest article on BlenderNation EVER! Introduction For a long time the exclusive domain of pythonists, Parametric Animation is now accessible to anyone in the form of a sophisticated and free node system: Animation Nodes. The name of the addon itself says a lot about its author: humility and rigor. Jacques Lucke is also known for Sniper and more recently Autocompletion addons. Animation Nodes is still in beta phase but after 6 months of intense activity on BlenderArtists, the addon reached stability and robustness. Description. Add-on: Auto Drawing Tool. Auto Drawing Tool uses a combination of the build modifier and the Freestyle renderer to simulate drawing animations. 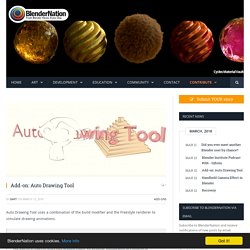 This is a new Blender add-on. Manuel Bastioni lab. Development news Testing the retarget feature for 1.5. 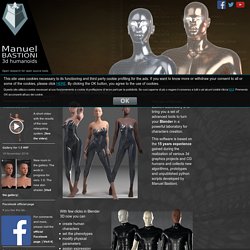 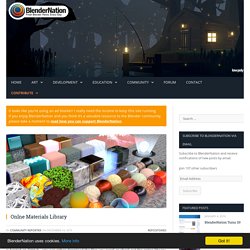 The entire thing is hosted on GitHub - you can either download the files you need, or check out the entire library and keep it automatically updated, and use the Matlib addon bu macraken to access the material. Over the years I've collected & released many materials library's, I like them & as a hoarder I've collected many materialsIn this collection I've focused on Cycles & OSL. Initially I started out with a single .blend file which was my standard format for releasing materials collections on blendswap, but it quickly became too large & prone to crashes.I've split the categories into files so it's much more manageable.

Related Laser Sheet OSL Shader OSL (Open Shading Language) shader nodes for Cycles are becoming more and more popular (and powerful). Animation Node experiment - Sound rainbow. For this experiment I used the sound visualizer nodes form the animation nodes addon I have been asked for tutorials a lot lately and so I added a view screenshots and descriptions to explain how I achieved the effect. as usual you can download the blend file here please add a comment if you like this longer format posts or if you have suggestions for future posts. the song I used for the animation is called "The Long Dawn - Part II" and can be found on soundcloud To analyze the audio material you need a "Sound Bake" and a "Evaluate Sound" node. 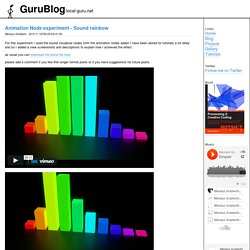 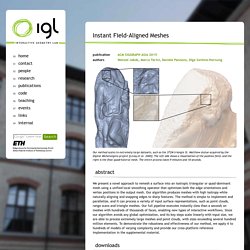 Matthew statue acquired by the Digital Michelangelo project [Levoy et al. 2000]. The left side shows a visualization of the position field, and the right is the final quadrilateral mesh. EasyFX. NodeArrange/__init__.py at master · JuhaW/NodeArrange. [Addon] Animation Nodes. Tissue (Blender add-on) Tissue add-on for Blender is developed by Co-de-iT for promote the use of Blender in Computational Design. 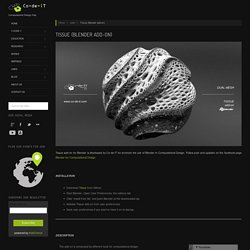 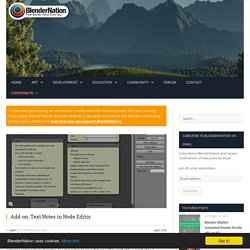 Looking at how complex some setups become, leaving notes to your future self is probably a good idea :) Pablo Vazquez shows how to use it: Related Striping a Curve in Blender/Cycles Learn how to create a procedural striped material using the node editor in this short tutorial by Johnny Matthews. June 26, 2014 In "Tutorials" Blend4Web 14.08 Available. Our development team proudly presents the new release of Blend4Web - the open source framework for creating interactive 3D web applications.

In this release: a new demo scene, improved animation, particle system and geometry procedural generation. Fluid Designer. Q. How much does Fluid Designer cost? A. You are free to use Fluid Designer for any purpose, including commercially or for education. This freedom is being defined by Microvellum’s GNU General Public License (GPL). Review: Animation Nodes Addon - BlenderNation. Jasperges/pose_lib_preview. BioBlogical - BioLogic's 3D & Design blog. I recently had to convert a bunch of 32 bit tif depth maps to 16 bit pngs at work, while keeping the same file names expect for the new extension.

Normally I’d do this in Photoshop, but photoshop doesn’t allow you to save 32 bit tifs as png, it only converts it to HDR, PSD, PSB, RAW, EXR or PBM. Which program does allow you to do that? Blender. You can load tifs and render them to any of the supported formats in Blender, which includes the 16bit PNGs I wanted. I loaded the tifs to the video sequence editor and rendered the frames as PNGs. So I decided to write an addon that does the same thing, only it saves the converted files with the same name as the original, except for the extension of course. Performing neural research with Blender - BlenderNation. And more brain-related science news: Performing neural research with Blender?

Check! Student Patrick Herbers has simulated the growth of neural dendritic structures. 3D Tree Growing Software - The Grove. Extensions:2.6/Py/Scripts/Add Mesh/Add Tree to Scene. Work in progress. Will hold the documentation for the spacetree add-on currently in contrib. The Rock Generator script for Blender 2.5 was launched on seeing a need for a way to quickly produce finished rock objects inside of Blender. This require that the add-on use a few input parameters to generate a base mesh, apply modifiers for detail, create and modify textures for displacement mapping, and be able to create and modify materials and procedural textures for the materials. In addition, to better reflect nature the generator required an element of randomness be built in to each aspect of the generator.

Blender Turn a 2D photograph into a 3D animation with Blam. eSnap - Snap objects and bones on location, rotation and scale. BakeTool- Blender Market - Improve Blender Baking. BakeTool is the In-House solution developed by Cogumelo Softworks for Bake Rendering with Cycles and BI. For those that work with Interactive Ambient , Arch Viz, Games… and need a Blender Baking Solution for your Assets, Full scenes, High Poly to Low Poly Normal Maps and others, Bake Tool is just what you need. What is the BakeTool? BLightStudio adds easy HDR light setup. Py/Scripts. Asset Sketcher - Blender Addon.

MotionTool is the in-house Node Based Animation Framework developed by Cogumelo Softworks. For those that work with Animation, Motion Graphics, FX and need a better animation solution or just wanna have some fun with procedural and node based animations MotionTool is just what you need! What is the MotionTool?