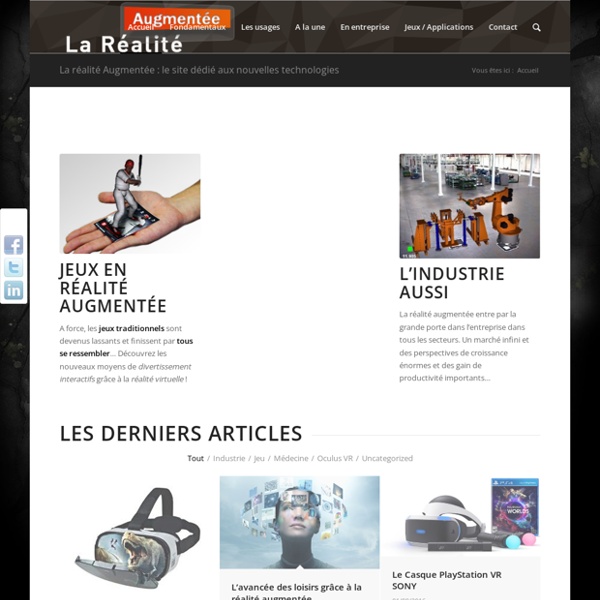 Augmented Reality: A different view of learning With a pre-pilot underway showcasing the range of data collected by project students, we are beginning to conceptualise how data can be both accessed and presented in the best educational and pedagogic contexts. For the former, we anticipate two main entry points into the biodiversity data. The first, and most concerned with this project, is accessed through augmented reality platforms such as Layar. At present this is compatible with mobile devices running on the Andriod and iOS platforms, with further development rumoured for the Symbian and Bada platforms.

Augmented Reality Apps Will Change the Way You Use Your Phone The line between the real world and the digital world is fading to grey, as Apple and Google gear up to bring augmented reality to your smartphone. Augmented reality - AR for short - takes the digital world and brings it together with your physical environment all in one place. AR has been around for a while, but its latest incarnation could be a game changer. Augmented Reality Movies and Their Challenging Future What do you do when watching passively a film on a screen does no longer excite your cinephile senses despite the latest 3D HD video and sound technologies? You experience an augmented reality movie. As AR slowly becomes part of our everyday lives through an impressive number of mobile applications including the much-awaited Google Augmented Reality Glasses, the benefits of this concept can be extended beyond the functional and sometimes gimmicky uses, in the movie entertainment industry. Augmented Reality Movies So Far

Creating Augmented Reality for Education The cARe project explores two examples of how Augmented Reality (AR) could be used to enhance learning. The examples focus on the use of AR with nursing students. Further details of the projects are described below. You can also watch the video that was used to describe the project. Example 1 – Clinical Skills Laboratory The first of these projects looked at the use of AR in supporting simulated practice.

WayfairView app debuts in Verizon stores BOSTON — WayfairView, the proprietary 3D augmented reality (AR) application developed by Wayfair Inc., debuted today in all Verizon stores as a featured app on the new ASUS ZenFone AR. The app uses Tango, Google’s AR technology, to let consumers see and manipulate virtual furniture and décor at full scale, in their homes. Because Tango operates on the Android system, WayfairView is available only on Androids. WayfairView comes with a $25 Wayfair gift card for a limited time. The Most Innovative Augmented Reality Experiences Of 2012 With the help of augmented reality, anything from gaming environments, advertisements, TV shows, and educational platforms can be transformed into highly interactive experiences. More and more leading brands are adopting the use of augmented reality to engage their audiences and enhance the brand experience, and at the recent AR Summit in London, eleven of the most innovative uses of augmented reality were chosen in an attempt to celebrate and ‘highlight those who are producing creative strategies, adopting new techniques, enhancing technologies and pushing forward the industry.’ Scroll through five of the examples in the ‘most innovative use’ shortlist, and see a full list here: Sesame Prototype Playset by Qualcomm

Release 2.0 of ARToolKit Professional for iPhone and iPad2 – May 20, 2011Posted in: Mobile, iPhone Release 2.0 of ARToolKit Professional for iOS is now available. The new release brings significant new features of the world’s most popular augmented reality toolkit to Apple iPhone, iPod touch 4G and iPad 2 devices. Of particular interest in the new release is the inclusion of a full-featured renderer using OpenSceneGraph (OSG) 2.9. This brings the widely supported and hugely powerful OSG frameworks for the first time to mobile augmented reality. Best augmented reality apps for iOS and Android in 2017 Article Content Next article Let us talk about best augmented reality apps. What is augmented reality: It is a technology that can enhance your everyday life using an electronic device, such as a smartphone or a tablet with iOS to Android. How Augmented reality works: AR apps use your current location to project virtual objects on display, or on special augmented reality glass. It provides enormous potential starting from chasing digital creatures to designing complex machines or engineering structures.

QR Code and 2D Code Generator This page is an online two dimensional code generator which is written in PHP. It can generate QR Code, Data Matrix, Aztec Code and Micro QR Code for the time being. Because QR Code is much more popular than the other code formats, it is separately named in the page title. If you need more information on two dimensional bar code systems, I strongly suggest that you take a look at Roger Smolski‘s comprehensive blog on QR Code and two dimensional bar codes. Using the form on this page, you can create two dimensional code images that trigger various actions on the scanner device. Don’t forget to install Qrafter or Qrafter Pro (why two versions?)