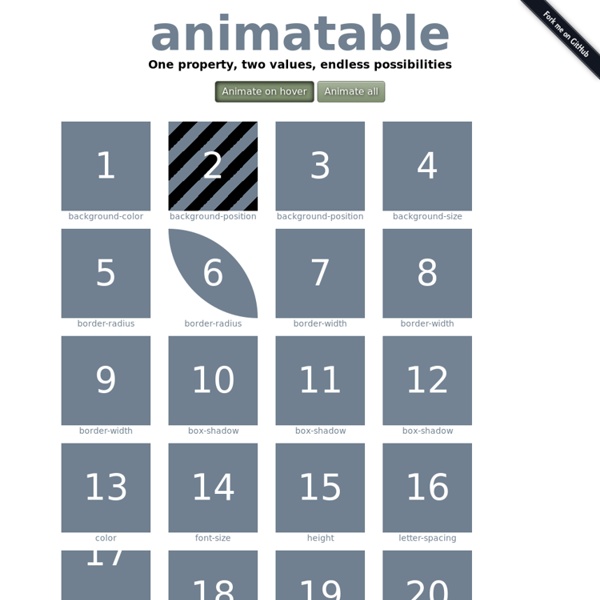 CSS3 Patterns Gallery Browser support The patterns themselves should work on Firefox 3.6+, Chrome, Safari 5.1, Opera 11.10+ and IE10+. However, implementation limitations might cause some of them to not be displayed correctly even on those browsers (for example at the time of writing, Gecko is quite buggy with radial gradients). Also, this gallery won’t work in Firefox 3.6 and IE10, even though they support gradients, due to a JavaScript limitation. What are CSS Shaders? - destroy/dstorey Adobe announced a proposal for CSS Shaders at Adobe Max two days ago. This was backed by both Opera and Apple, and the spec will be developed by the FX Task Force at the W3C. For those of you who are not aware, the FX task force is an elite band of ninjas’s chosen from the ranks of the CSS and SVG Working Groups to work on specs common to both technologies. Their most notable work so far is perhaps the Filters Effects 1.0 spec, but they’re also working on a common model for Transforms and Animations. So what exactly is the CSS Shaders proposal, and how does it relate to the existing proposals and technologies? First I will introduce you to the required terminology (you can skip that section if you are already into computer graphics), then I will dig into the proposal and see what it can do.

An analogue clock using only CSS Having read the blurb around Safari’s CSS transitions I opted to familiarize myself with a quick project — the aim of which was to create a functional, CSS only, analogue clock. Result Experiment: CSS Analogue Clock Experiment works in Safari 4 Beta and Google Chrome. A working clock that optionally resorts to JavaScript to grab the current time (can be achieved by other means). Exper­i­ment updated.

rgba.php test page Want to use RGBA in your projects but a solid color fallback for Internet Explorer 8- (and other old browsers) is just not good enough? Do you find that creating fallback semi-transparent pngs is too time-consuming? With rgba.php you get to use RGBA backgrounds in every browser with just one extra CSS declaration! All you need to use it is a server supporting PHP. How? background: url('rgba.php/rgba(255, 255, 255, 0.3)'); background: rgba(255, 255, 255, 0.3);

An Introduction To The CSS3 Multiple Column Layout Module The Multi Column Layout Module has been introduced to help us create columns quickly and easily using CSS3 only. In this tut I'm going to be taking a look at some of its properties and demonstrate them through a series of examples. Anyone who has tried to create multiple columns in the past using CSS will already know that this type of layout has been achievable for a long time. However, this has often resulted in the use of hacky techniques and floats. More often that not this has been quite time consuming and definitely not the easiest of layouts to create. The truth is creating multiple columns using CSS has been an extremely awkward process up until now.

Front-end Code Standards & Best Practices Overview This document contains guidelines for web applications built by the Creative Technology (front end engineering) practice of Roundarch Isobar. It is to be readily available to anyone who wishes to check the iterative progress of our best practices. This document's primary motivation is two- fold: 1) code consistency and 2) best practices.

CSS Animations with only one keyframe This is a very quick tip, about a pet peeve of mine in almost every CSS animation I see. As you may know, I’m a sucker for reducing the amount of code (as long as it remains human readable of course). I demonstrated a very similar example in my “CSS in the 4th dimension” talk, but I recently realized I never blogged about it (or seen anyone else do so).

CSS2 - The display declaration The display property lets you define how a certain HTML element should be displayed. display: block display: block means that the element is displayed as a block, as paragraphs and headers have always been. A block has some whitespace above and below it and tolerates no HTML elements next to it, except when ordered otherwise (by adding a float declaration to another element, for instance). Live example: display: inline Using CSS to Do Anything: 50+ Creative Examples and Tutorials Apr 21 2008 CSS can powerfully open the doors to a lot of rich and unique techniques. Today we are presenting a round-up of CSS coding, creative approaches and techniques. Definitely worth taking a very close look at! We also included some basic techniques you can probably use in every project you are developing.

Let Your Content Do the Talking: Fullscreen API Most browsers have the ability to enter a fullscreen or kiosk mode for a while now. Basically, the browser's chrome UI gets out of the way, and the content takes over. For apps installed from the Chrome Web Store, it's even been possible for users to manually configure an app to run fullscreen when it's opened from the New Tab Page. Manual fullscreen is good. Programmatic fullscreen is better! PrefixFree: Break Free From CSS Prefix Hell Advertisement This article is the first piece in our new series introducing new, useful and freely available tools and techniques presented and released by active members of the Web design community. Lea Verou is well-known for her experiments with CSS and JavaScript and in this post she presents her recent tool, prefixfree, which will hopefully help you break free from the CSS prefix hell.

Semantic Animation I recently said this when asked about new tools (e.g. Edge) for building CSS animations: Empty divs used for nothing but styling were non-semantic and a bad idea before CSS animations and they are a bad idea now. When can I use... Support tables for HTML5, CSS3, etc - Recommendation * Usage stats: Global Support: Partial support: Getting Started - Google Web Fonts This guide explains how to use the Google Fonts API to add fonts to your web pages. You don't need to do any programming; all you have to do is add a special stylesheet link to your HTML document, then refer to the font in a CSS style. A quick example Here's an example.