Playscapes - All the Best Playgrounds are Here 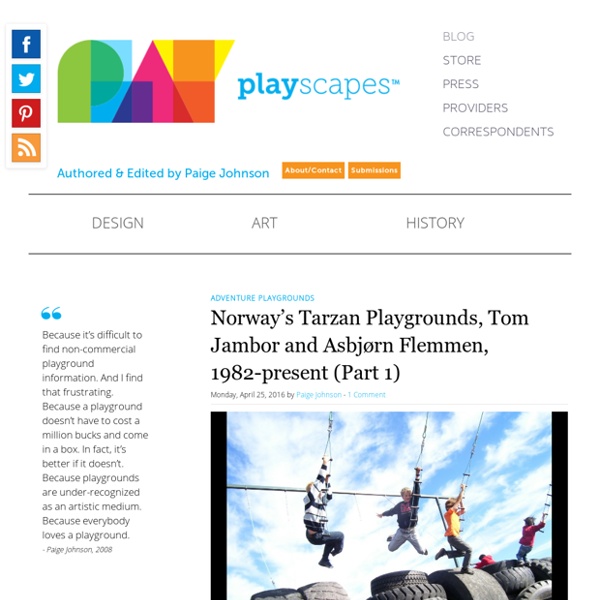 Very happy to be on RadioBoston yesterday with Ruth Graham to discuss natural playgrounds…you can listen here! There’s a new way to interact with Playscapes…over on Facebook Sarah has started a new Playscapes open group page for dialog about design, diy and other topics! This is to replace the forum that was on the old blog. Use it to share your own projects, job announcements, queries, news, and tips on DIY projects like the Playhive and Monstrum Car-Caravan! Did you know Aldo van Eyck used children’s crayons to color in his playground plans? So nice.

shin egashira » playground This Playground is part of the Playgrounds and Toys project by Art for the World, an NGO that invites artists to contribute their art around the world. This playground was proposed for the community affected by the Tsunami in the Southern coast of India. The playground is inspired by rocks, waves and the wind, and their formal relationship. Woodland Discovery Playground at Shelby Farms Park The Woodland Discovery Playground was designed by Shelby Farm Park Conservatory’s Master Plan design firm, James Corner Field Operations (JCFO), and the design process was anything but ordinary. To create the next great 21st century play landscape, SFPC and JCFO went straight to experts—local kids. The site for the Woodland Discovery Playground is situated on an existing twenty-year-old play area and edged by woodland that has been overtaken by Chinese Privet. The design of the playground capitalizes on its location with a woodland restoration project and significant new native plantings that enmesh the play space with its surroundings. Within its wooded context, outdoor play at Shelby Farms Park will promote discovery, provoke challenges, embrace delight, encourage creativity, build relationships, and cultivate healthy children’s development.

Boulder Creek Apartments Phoenix, AZ Wednesday, May 18 2011 08:09 Want to start up a little garden, but think you do not have room in your apartment. Well think again. Here are some ideas on how to start an apartment garden. Herbs are the easiest to grow inside. They are small and take up very little room. Ghostly sculptures of Bruno Walpoth Ghostly sculptures of Bruno Walpoth. Life-size, his powdered beauties, as if in opposition to their ghostly stature, seem heavy and grounded, their gazes locking whomever sees them into a spiritual arrest. Working with traditional sculptural methods, Walpoth’s work is almost alchemical in quality. Muscles, eyes and fingers that have been carved into wood (lime and walnut) or covered with lead leaf foils, seem soft and supple, sad and pensive. JORGE AYALA: Landscape Urbanism Lab 18 December, 2010 Landscape Urbanism Lab | Final Projects [Tristan]_ Infrastructural Ecologies | La Défense

eirut » Siteless Architecture François Blanciak’s recently published book ‘Siteless’ (MIT Press 2008) features 1001 architectural designs unconstrained by scale or context. Each of his hand drawn sketches represents a possible design for a building anywhere –or maybe nowhere– in the world. Each drawing is complemented with a title, which is just as imaginative and humorous. This book belongs to a long tradition of experimentation in architecture, which privileged inspiration over rationalism. Its subtitle ‘1001 Building Forms’ is an homage to Iakov Chernikhov’s 101 architectural fantasies. Among François Blanciak’s other inspirations, he cites John Hejduk, Jean-Nicolas-Louis Durand, and Hermann Finsterlin.

Wikado « 2012Architecten For the foundation “Kinderparadijs Meidoorn” 2012Architecten designed a new playground on their 1200m2 plot. The existing playground was in a bad shape and in need of renovation. 2012Architecten mapped the old situation and selected the elements that were fit for reuse in a new playground. After this process a design was made. Five (discarded) rotor blades are used to create a maze like space with a panna court in the center, placed on the existing concrete circle. Four towers are placed around it, each with a distinctive character.

Seo Young Deok's Incredible Chain Sculptures photo © Seo Young Deok The human body and its formation lie at the core of the Korean artist Seo Young Deok’s work who is preoccupied with the stories told through the human figure. His solo exhibition 'Dystopia' took place at the INSA/Arko Art Centre in Seoul from 26 October 2011 until 31 October 2011 and showed his nude sculptures made meticulously in welded metal chain links piece by piece. Seo Young Deok presented a number of nude sculptures, some lying on the ground, some hung on the walls. He used welded metal chains in order to model them linking them piece-by-piece.

prototypes « LANDSCAPE URBANISM / CR FABRICATING THE GROUND – Digitally Fabricated Cities Presentation Student work developed during the 1-week studio workshop. We want to express our deep gratitude to our invited tutors, Nicola Saladino and Chen Chen, for their intense collaboration and support during the week. Landscape Plans Here are a few examples of some of the plans that we have been working on. These renderings are by my great friend Ted Hardwick; as you can see he is an amazing illustrator and draftsmen. My presentations wouldn’t have nearly the weight the I hope they do without his help. We do some computer generated rendering but I really feel like you get a much more organic feel with these. Enjoy.

PlayDesigner This is my graduation work from the Child Culture Design master program at The School of Design and Crafts in Gothenburg. Invoxicated is an interactive play sculpture where children and adults can play with sound. The sculpture takes in sound through one end and feeds out processed sound in the other.