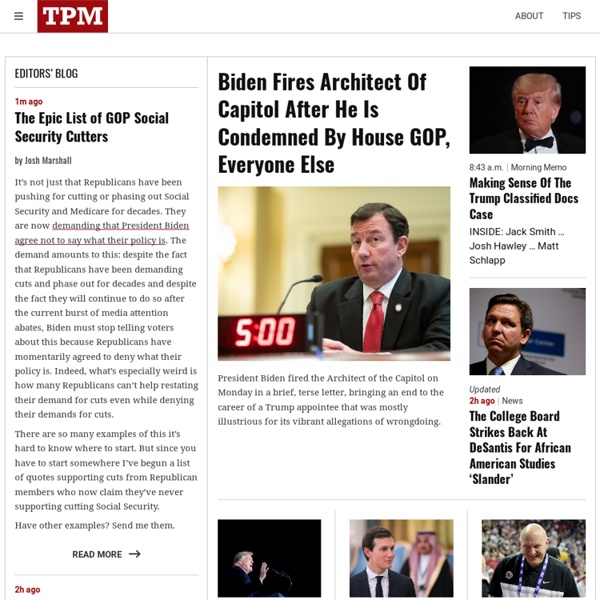 I've just launched a discussion in The Hive (sub req) about the transformation from reading paper books to digital books. Baffling as it is to me, since for decades I was not only a voracious reader but a devotee of the physical book itself, I made the transition about three years ago. I'm just not able to read paper books anymore. I'm almost embarrassed to admit that. But it's true. Are you the same?

It's the Inequality, Stupid Want more charts like these? See our charts on the secrets of the jobless recovery, the richest 1 percent of Americans, and how the superwealthy beat the IRS. How Rich Are the Superrich? A huge share of the nation's economic growth over the past 30 years has gone to the top one-hundredth of one percent, who now make an average of $27 million per household. The average income for the bottom 90 percent of us? $31,244. Zaius Nation - Some Apes Are More Equal Than Others Progressive News and Commentary with an Attitude Former Wall Street Goldman Sachs executive Nomi Prins is back with a thoroughly documented historical account of how DC and financial barons are locked at the hip. Accessible and compelling: Buy directly from Truthout by clicking here.

The Political Lie, From Cicero to Joe McCarthy - Ben W. Heineman Jr. As a core campaign tactic, lying is nothing new. Senator McCarthy in 1954 (Wikimedia Commons) The point-counter point after Paul Ryan's convention speech has raised many questions -- about, for instance, the role of the media and the role of self-appointed "fact-checkers." But none is more important than the question of whether both campaigns have chosen direct lies as a core campaign tactic and whether, if so, this will increase cynicism and foster distrust in the electorate. Letter from Birmingham Jail The Letter from Birmingham Jail (also known as "Letter from Birmingham City Jail" and "The Negro Is Your Brother") is an open letter written on April 16, 1963, by Martin Luther King, Jr. Background[edit] The Birmingham Campaign began on April 3, 1963, with coordinated marches and sit-ins against racism and racial segregation in Birmingham, Alabama. The non-violent campaign was coordinated by Alabama Christian Movement for Human Rights and King's Southern Christian Leadership Conference. On April 10, Circuit Judge W. A.

Steve Bates, The Yellow Doggerel Something TomDispatch Economic Dreams - Economic Nightmares I spent most of my working life in the US Forest Service, battling fundamentalism. Most of the battles dealt with economics. My first job was to coordinate use of a linear programming model (FORPLAN) in the development of forest plans. The model may (or may not) have been useful in projecting overall timber sales volumes from big-timber forests, but to have used it as an overall planning model was a mistake. archy CounterPunch: Tells the Facts, Names the Names NYC Protest for American Revolution BlondeSense