A multi-partisan activist group established to expose and resist US imperialism, corpora-terrorism, and the New World Order 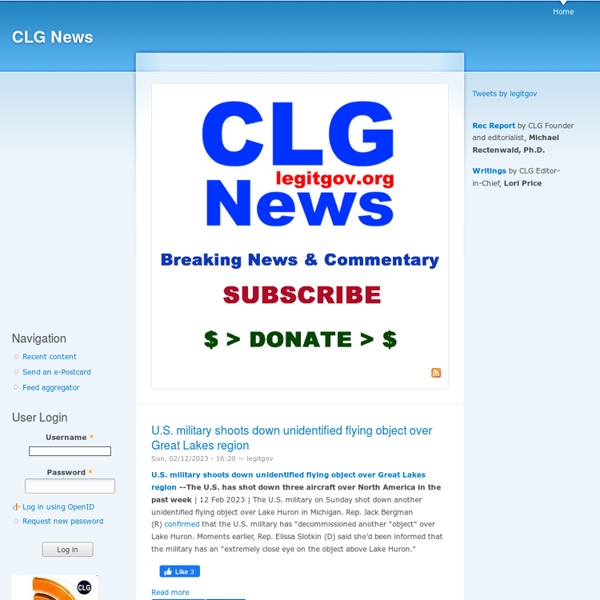 A hidden world, growing beyond control The top-secret world the government created in response to the terrorist attacks of Sept. 11, 2001, has become so large, so unwieldy and so secretive that no one knows how much money it costs, how many people it employs, how many programs exist within it or exactly how many agencies do the same work. These are some of the findings of a two-year investigation by The Washington Post that discovered what amounts to an alternative geography of the United States, a Top Secret America hidden from public view and lacking in thorough oversight. After nine years of unprecedented spending and growth, the result is that the system put in place to keep the United States safe is so massive that its effectiveness is impossible to determine. The investigation's other findings include: * Some 1,271 government organizations and 1,931 private companies work on programs related to counterterrorism, homeland security and intelligence in about 10,000 locations across the United States. An alternative geography

Christopher Hitchens: Israel Needs To End The Occupation To Truly Join The West Last week Christopher Hitchens was interviewed on Hugh Hewitt's radio show, and he had some tough words for Israel. The author said that if Israel truly wants to be part of the West then it will have to end its occupation of Palestinian territories and accused Israelis of being "unbelievably irresponsible" (via Daily Dish): In order for Israel to become part of the alliance against whatever we want to call it, religious barbarism, theocratic, possibly thermonuclear theocratic or nuclear theocratic aggression, it can't, it'll have to dispense with the occupation. It's as simple as that. It can be, you can think of it as a kind of European style, Western style country if you want, but it can't govern other people against their will. It can't continue to steal their land in the way that it does every day. Hitchens is promoting his memoir "Hitch-22" but canceled much of his book tour after he was diagnosed with esophageal cancer.

Seize BP: Sign the Petition! Seize BP: Campaign Statement and Petition The government of the United States must seize BP and freeze its assets, and place those funds in trust to begin providing immediate relief to the working people throughout the Gulf states whose jobs, communities, homes and businesses are being harmed or destroyed by the criminally negligent actions of the CEO, Board of Directors and senior management of BP. Take action now! Sign the Seize BP petition to demand the seizure of BP! Which road will lead to justice? There are three roads, or options, by which compensation can be provided for those who have been harmed from the BP oil disaster. The first path, or option, is the BP claims process whereby BP determines what to cover and how much to pay. The second path is through the courts, where people can file litigation and lawsuits against BP. Both BP and the Obama administration want to push everyone seeking compensation down these two paths, but these two paths lead nowhere. Take Action Now

Mark V. Vlasic: Remembering Srebrenica & Our Responsibility to do More Fifteen years ago today, thousands of Muslims were being slaughtered in Europe. Some were killed opportunistically, but most were killed in a full-scale military operation: hands tied and blindfolded, they were lined up before freshly dug mass graves and shot in the back. In other cases, rather than bussing them to mass grave locations, their captors chose to murder them were they were detained - slaughtering them by the hundreds at a warehouse and theater, by volleys of gunfire and rocket-propelled grenades. It is estimated that over 8,000 Muslims were executed after the July 11, 1995, fall of Srebrenica, Bosnia, to the Bosnian Serbs. Rather than offering a safe haven, the United Nations expelled fearful Muslims from their base and watched as another European genocide unfolded. I was one of the U.N. employees involved in the world's belated response to that massacre. Every year, international diplomats pause to remember the world's most recent genocides. Mark V.

Mass. may join effort to bypass Electoral College - Local News Updates - MetroDesk By Martin Finucane, Globe Staff The state Legislature is poised to give final approval this week to a new law intended to bypass the Electoral College system and ensure that the winner of the presidential election is determined by the national popular vote. Both the House and Senate have approved the National Popular Vote bill. Final enactment votes are needed in both chambers, however, before the bill goes to the governor's desk, the Globe reported last week. Governor Deval Patrick's press office didn't immediately return a message this morning seeking comment on whether he would sign the bill, if it makes its way to his desk. Under the proposed law, all 12 of the state's electoral votes would be awarded to the candidate who receives the most votes nationally. Supporters are waging a state-by-state campaign to try to get such bills enacted. Illinois, New Jersey, Hawaii, Maryland, and Washington have already adopted the legislation, according to the National Popular Vote campaign's website.

Beck falsely suggests Ginsburg supports "cleansing" America of "unwanted populations July 16, 2010 11:17 pm ET — 3 Comments Glenn Beck distorted Ruth Bader Ginsburg's comments on abortion to suggest she supports "cleansing" America of "unwanted populations." In fact, Ginsburg was attributing that sentiment to others, not adopting it herself. Beck distorts Ginsburg's remarks on abortion Beck distorted comments Ginsburg made to suggest she supports "cleansing" America of "unwanted populations." From the July 16 edition of Fox News' Glenn Beck : KING: Reparations in that there's enough in America, there's enough on the planet for us all to live peacefully together and have. BECK: Yeah. KING: So, it's these big rich companies who pay for genocide that need to stop; they need to repent. BECK: When you say Ruth Bader Ginsburg recently made a revealing decision -- or revealing admission in favor of cleansing of America of unwanted populations by aborting them. STEPHEN BRODEN (GOP congressional candidate): She wasn't talking about the white population. BECK: Yeah. BECK: Yeah.

Bachmann's Tea Party Caucus Gets Nod, Seeks Members Now that U.S. Rep. Michele Bachmann has gained approval for a Tea Party Caucus in the House, the next question is who will join the group. The Minnesota Republican tweeted Monday that her proposal for the caucus received official sanction from the House Administration Committee, despite earlier speculation that Democratic antipathy to tea partyers could doom the request. Committee Chairman Robert Brady, a Pennsylvania Democrat, told Bachmann in a July 16 letter that her caucus could not use funds to pursue a legislative agenda, according to The Hill. Bachmann, who will chair the caucus, proposed the group without consulting the GOP leadership. “It was something we were doing on our own,” Bachmann spokesman Dave Dziok told Politico. Until now, Republican members of Congress, including House Minority Leader John Boehner, had participated in tea party rallies or declared their support without formally affiliating with the movement. House Republican Conference chairman Rep. © 2014 Newsmax.

Economic future 'unusually uncertain' With the outlook for the economy “unusually uncertain,” Federal Reserve Chairman Ben S. Bernanke advised Congress on Wednesday not to precipitously cut stimulus spending in a drive to rein in the deficit, but rather focus on longer-range budget reforms that will reduce the deficit in the next five years but not immediately threaten economic growth. Mr. Bernanke told the Senate Banking, Housing and Urban Affairs Committee that the central bank is reviewing its own options for further stimulating economic growth “if the recovery seems to be faltering,” although he insisted that he still expects moderate growth of 3 percent to 3.5 percent for the rest of the year. His remarks confirmed fears in financial markets that the economy recently took a turn for the worse, and sent the Dow Jones Industrial Average down by more than 100 points. Mr. “At the current moment, large deficits, as unattractive as they are, are important for restoring economic activity and stability. Mr. But while Mr.