I'm On A Boat (Explicit Version) 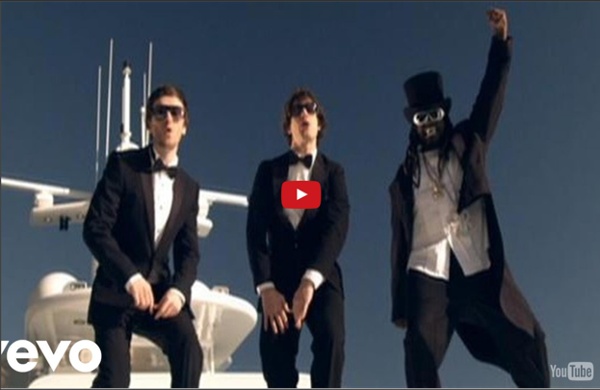 The Sacred Geometry Of Music The Sacred Geometry Of Music by Andrew Lorimer Music uses the laws of vibration to manifest aurally what exists at the center of everything. Into our reality springs a non-visual harmonic law that is universal. The notes and intervals of music speak directly to the chakra centers and causes them to vibrate in harmony to the vibration of a string or vocal chords, speakers moving through the air, or the sound of someone’s lips making a farting noise through a metal tube. Music uses the laws of physics and mathematics to bring out an emotional response in the listener. The music of the Western world uses a mathematical system based on Twelve. All the songs you have ever known and sang along to in your life use the same simple laws based on the number twelve. Clock Harmonisphere The mathematics of the harmonisphere are amazing. When we measure the same chords on the harmonisphere, the seven chords have the same mirrored combinations as the piano:

Skrillex - skrillex.com Vibrations, Harmonics, Resonance, Waves and Reality the Musical Scale The musical scale is not an accident. It is a natural consequence of pure mathematics and nature. It's more proper to say it was discovered - not invented. This is one reason why music can be seen as the true universal language. The scale we use divides the octave based on the harmonic series into 12 notes, the 12th being the same note an octave higher than the first. Spheres of Sound: Illustrated sequence of wave vibrations on the harmonic diagonal (from ) The tone C is the whole, a ratio of 1:1, therefore C encloses the total space. An expansion goes away from the diagonal, while a contraction moves toward a diagonal.

Sketchy Friends Dance 2 Gorillaz, James Murphy, Andre 3000, 'DoYaThing' - Review - NME Blogs Converse always manage to pull it out of the bag with their ‘Three Artists, One Song’ collaborations (remember Casablancas/ Pharrell/Santogold’s ‘My Drive Thru’?). ‘DoYaThing’ is no exception. Damon – in his “2-D” voice that suggests both listless ennui and schoolboy mischief, sings: "I’m a pale imitator of a boy in the sky." Enter, stage left, a falsetto James Murphy singing the hook. An organ parps with 60s Exotica playfulness and then, in an effect which piles on the plinky-plonky vibe, Murphy sings like he’s caught mid-way between channeling his inner Austin Powers and Alexis from Hot Chip. So far, so expected.

I Heart Chaos & Thirty-ish Things: Evil Rape face Woody. He is the law. (Possibly NSFW) I’m not sure exactly who created these photos, so if anyone knows, please speak up. the best I could do is that they came out of 2chan at some point. 20 Awesome Do It Yourself Projects Thursday, June 14, 2012 4:30 am, Posted by Chris Groves | Internet 20 Awesome Do It Yourself Projects Topics: At Home Project Ideas , Creative DIY Home Projects , Do It Yourself Projects for 2012 , Fun How To Projects , What to Do with Extra Stuff Are you bored and have a bunch of extra little items hanging around here and there? Well we were in the same boat so we decided to round up 20 different awesome at home projects you can do. You honestly don’t know some of the creative things you can do with what could possible be junk. If you know of any great at home Do It Yourself Projects please leave a comment to include your own and maybe we will add it to our list. And for the upcoming holiday season we want to give all you do-it-yourselfers a head start with these incredible Christmas DIY for 2012 1. More info: here | Buy: here 2. More info: here 3. 4. 5. 6. 7. 8. 9. 10. 11. 12. 13. 14. 15. 16. 17. 18. 19. 20. Incoming search terms:

sharpie liquid pencil aug 10, 2010 sharpie liquid pencil sharpie has just unveiled their new ‘liquid pencil’. the pencil uses liquid graphite ‘ink’ to write like a pen, erase like a pencil, and eventually dry like a permanent marker. once written, you have three days to think about the validity and weight of your words. during this period you can erase it just like pencil marks. after the three days is up, the pencil lines will turn to ink and remain inscribed forever. according to the sharpie blog the new liquid pencil will be in stores from next month, september 2010. via wired ridhika naidoo I designboom If Everyone Knew | 5 facts that everyone should know.

The Just-World Fallacy & You Are Not So Smart The Misconception: People who are losing at the game of life must have done something to deserve it. The Truth: The beneficiaries of good fortune often do nothing to earn it, and bad people often get away with their actions without consequences. A woman goes out to a club wearing stilettos and a miniskirt with no underwear. She gets pretty drunk and stumbles home in the wrong direction. She ends up lost in a bad neighborhood. She gets raped. Is she to blame in some way? People often say yes to all three in studies asking similar questions after presenting similar scenarios. It is common in fiction for the bad guys to lose and the good guys to win. More specifically, this bias is a lens through which you tend to see the world, and seeing things in this way often leads to a predictable reaction to horrible misfortune like homelessness or drug addiction – believing the people stuck in horrible situations must have done something to deserve it. The key word there is deserve. Sources:

hey guys, i think they are on a boat! haha, great video. by purpleunicorn May 20