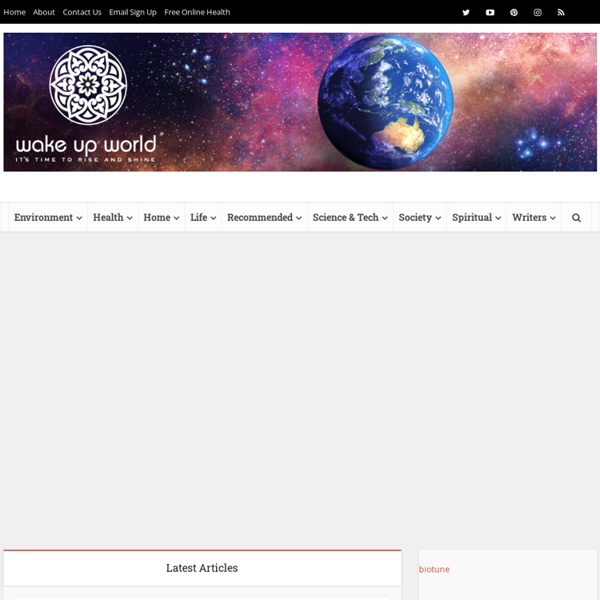 Com-piracy: Proof Human History was Written by Government, Not Science 24th April 2014 By Steven & Evan Strong Contributing Writers for Wake Up World Throughout three previous articles we highlighted a series of newspaper clippings that proved between 1914 and 1939 there was widespread understanding in academic circles of the bounty of ancient Egyptian influenced archaeology in Australia. But amongst all the favourable publicity and positive public reaction we uncovered, there is an elemental problem we could not resolve.

Belief Systems By Kanta Jacob Katz Ph.D Guest Writer for Wake Up World Our belief systems are thoughts that have become our habits that determine what we think, what we feel and how we react to life. They influence every fiber of our being. In our everyday life when we talk about “beliefs” we usually refer to the values we adopt consciously in our life, to our social, political and religious ‘beliefs’ according to which we act and behave. However, here we are talking about something of a wider perspective: about convictions that we have embraced regarding the world and ourselves in general of which we are not always aware. Aztec Civilization The Aztec Empire flourished between c. 1345 and 1521 CE and, at its greatest extent, covered most of northern Mesoamerica. Aztec warriors were able to dominate their neighbouring states and permit rulers such as Motecuhzoma II to impose Aztec ideals and religion across Mexico. Highly accomplished in agriculture and trade, the last of the great Mesoamerican civilizations was also noted for its art and architecture which ranks amongst the finest ever produced on the continent. The Aztec state is actually the most well documented Mesoamerican civilization with sources including archaeology, native books (codices) and lengthy and detailed accounts from their Spanish conquerors - both by military men and Christian clergy.

David Icke Headlines ‘After remaining silent for days, Nevada Sen. Harry Reid made comments regarding the ongoing dispute between the Bureau of Land Management and rancher Cliven Bundy today, accusing the Bundy family of violating the law. “Well, it’s not over. We can’t have an American people that violate the law and then just walk away from it.

waldosia The Dictionary of Obscure Sorrows is a compendium of invented words written by John Koenig. Each original definition aims to fill a hole in the language—to give a name to emotions we all might experience but don’t yet have a word for. The author's mission is to capture the aches, demons, vibes, joys and urges that roam the wilderness of the psychological interior. Each sorrow is bagged, tagged and tranquilized, then released gently back into the subconscious. 150 Years of The Tube You are going to listen to a radio clip about the London Undergrounddo a comprehension activity Discuss Does your city have a metro or underground railway?How old is it?Have you ever been on the Tube in London?

BenjaminFulford (CJA 1967, S.9: MC Rules 1981, 7 70.) Magistrates’ Court Act 1980 S.102 Name: Benjamin Fulford, also known as 古歩道ベンジャミン Date of birth: March 19, 1961 Address: 3-6-9 Kichijoji Higashi Machi, Musashino-Shi, Tokyo 180-0002 Japan This statement is being made at the request of Mr. 10 Differences Between Successful and Unsuccessful People Everyone strives to be successful, but it doesn’t always come easily. The people who do end up reaching their highest potential always possess certain qualities and habits that allowed them to get there which separate them from those who don’t. Here are 10 differences between successful and unsuccessful people! 1. Embrace change vs. Icy Finger of Death Filmed for the First Time Like a lightning bolt hurled down from Mount Olympus, an icy “finger of death” strikes at sea life beneath the Antarctic ice shelf in what is surely one of the most jaw-dropping natural history sequences ever filmed. Called a brinicle, or brine icicle, this sinister tube of ice grows over a matter of hours as super-salty brine leeches from the forming sea ice above. This video — a scene from Frozen Planet, premiering on Discovery Channel on March 18 — illustrates how this happens, as well as the deadly consequences for the slow-moving marine invertebrates in its path. The brinicle was filmed in 2009 by underwater cameramen Doug Anderson and Hugh Miller. Their mission in Antarctica was to film the diverse underwater communities beneath the sea ice, but on arriving in McMurdo Sound, they began to hear improbable tales from local scientists about ice stalactites that grow with amazing speed.

Visiting London Listen and answer these questions:1. What’s the population of London? And its area? The Gralien Report » UFOs Much has been written about Admiral Byrd’s alleged discovery of Nazi tech in Antarctica… but perhaps there is more myth inferred here than actual evidence found. Continue reading Chasing the origins of the term “Singularity” in modern usage, similar ideas were expressed early on by computer scientist Jacques Vallee… but not how you might think.