Students-punched-and-dragged-to-the-ground-by-their-hair-as-police-break-up-sitin-8984395. Three people were arrested amid chaotic scenes as around 60 demonstrators barricaded themselves into Senate House. 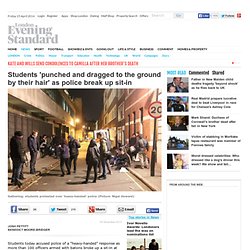 Students were protesting against the threats to close the University of London Union (ULU) and campaigning for sick pay, holiday pay and pensions for contract staff. Officers were called by university authorities at 3pm and clashed with protesters both inside and outside Senate House as more demonstrators gathered in Malet Street. Police remained at the scene until shortly after 11pm. A 24-year-old student and part-time teacher told the Standard: "I have never seen a student occupation treated like this. This was a civic matter, but the university got at least 100 police officers in to deal with it which seems extremely heavy-handed. " A statement from ULU said: "We are still investigating what happened but initial reports indicate protesters were assaulted by both police and security, thrown to the ground, kicked and punched, and dragged to the ground by their hair. 39-arrests-as-university-of-london-bans-protests-after-two-days-of-unrest-8987557.

College bosses today said the emergency injunction was the “last straw” to stem what it described as “a campaign of aggression and intimidation”. 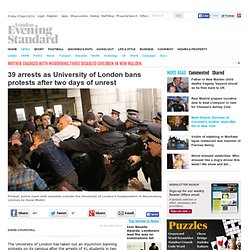 The student action is part of a wave of campus sit-ins across the country in protest at the privatisation of university support services. The emergency High Court injunction was granted after violent clashes between police and more than 200 students on Wednesday. Yesterday, 36 people were arrested in scuffles during a sit-in at Senate House in Malet Street.

UK Students Facing Violence, Intimidation and Arrest for Opposing Privatisation of their Universities. The growing student movement in opposition to the marketisation of Higher Education is being confronted by the full force of the emergent British police state. 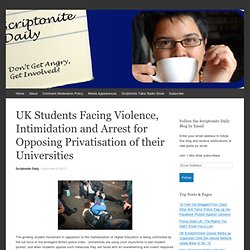 Universities are using court injunctions to ban student protest, and when students oppose such measures they are faced with an overwhelming and violent response by the UK’s militarised police force. The Plight of Students Two things have trebled under the Coalition government since 2010: university tuition fees, and long term youth unemployment. In order to pay tuition fees, accommodation, food and other expenses, the average student will leave University with personal debts of £53,300. Yet our 18-24 year olds are less likely to find employment than at any time in the last twenty years.

The students rose up in their tens of thousands in 2010, to defend their right to an education without incurring enormous debts through tuition fees. But rather than standing with these young people, the UK public abandoned them. To kick out the market, first kick the cops off campus! By KD Tait University bosses have launched a crackdown against a wave of student occupations. 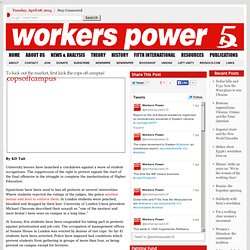 The suppression of the right to protest signals the start of the final offensive in the struggle to complete the marketization of Higher Education. Injunctions have been used to ban all protests at several universities. Where students rejected the rulings of the judges, the police wielded batons and boot to enforce them. In London students were punched, bloodied and dragged by their hair. At Sussex, five students have been suspended for taking part in protests against privatisation and job cuts. Bail conditions shackle editor student newspaper #mediablackout. London students occupy building in support of lecturer strike. • University staff angry at ‘13% pay cut’ • 100 Goldsmiths students involved in occupation University academic and support staff held a second strike over pay today, with students at one London university staging an occupation in support. 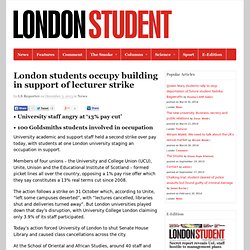 Members of four unions – the University and College Union (UCU), Unite, Unison and the Educational Institute of Scotland – formed picket lines all over the country, opposing a 1% pay rise offer which they say constitutes a 13% real terms cut since 2008. The action follows a strike on 31 October which, according to Unite, “left some campuses deserted”, with “lectures cancelled, libraries shut and deliveries turned away”. Police make arrests as Occupy Senate House broken up. • At least 3 arrests as demonstrators forced off site • ULU: protesters “thrown to the ground, kicked and punched” • Footage shows officer throw punches at demonstrator A police officer pins down a protester, who was later arrested. 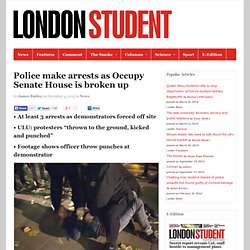 36 arrests at 'Cops Off Campus' protest. • London Student editor among those held • Police kettled students and “were brutal” • UoL granted injunction banning onsite protest until June 2014 The scene outside Euston Square, where at least 34 arrests were made. Photograph: Oscar Webb Thirty-four students, including protesters and two journalists, were today kettled and arrested during a demonstration against police presence on university campuses. Up to 4,000 students march in 'Cops Off Campus' national day of action. Protester throws bin at police van. 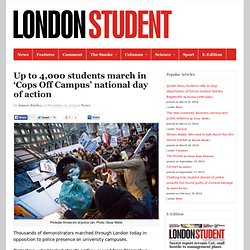 Harry Stopes: Spin and slander from UoL managers. We should expect honesty from our university. 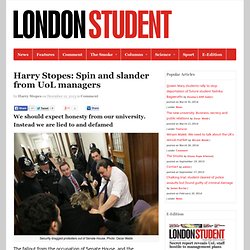 Instead we are lied to and defamed Security dragged protesters out of Senate House. Photo: Oscar Webb The fallout from the occupation of Senate House, and the subsequent arrests of students by the police, have provoked a war of words, claims and counterclaims. Probably no party has been entirely innocent, or entirely honest, but the University of London in particular has been brazen in releasing one-sided self-justificatory tracts posing as press releases. The university has said that the occupiers of Senate House were “aggressive” and “intimidating” to staff, and that staff therefore feared for their safety. The Beaver. Students call for cops off campus. Students will argue for their right to protest amidst growing mistrust of police and university administrations by Martha Elwell Wednesday 11th December 2013, 00:18 GMT. 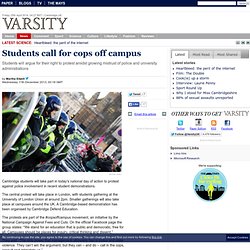 Cops Off Campus Protest. Clampdowns on student protest are a ‘disgrace’ says Green party. The Young Greens have strongly condemned the ‘brutal’ treatment of protesters by police at the University of London on Wednesday, as well as the suspension of five students at the University of Sussex following a campus occupation. 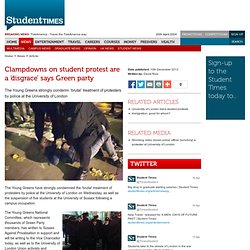 The Young Greens National Committee, which represents thousands of Green Party members, has written to Sussex Against Privatisation in support and will be writing to the Vice Chancellor today, as well as to the University of London Union activists and management. Cops off campus protest at the University of London 5 December 2013. Police accused of using excessive force at student protests. Students were involved in a series of angry confrontations with the police in central London on Thursday as allegations circulated that officers had used unacceptable levels of force to break up campus protests over the past few weeks.

Video footage obtained by the Guardian appeared to show one officer striking a hooded protester in the face after students occupied part of the University of London Senate House headquarters on Wednesday. On Thursday about 200 students held a "Cops off campus" rally outside the University of London Union building, which led to further violent confrontations with scores of officers that spread to surrounding streets. A Metropolitan police spokesman said there had been 36 arrests. Police violence won't stop this new alliance of students and workers. A police officer warns students not to ram the gates of Senate House, Bloomsbury, during a Cops off Campus protest on 5 December. Photograph: Lee Thomas/ Lee Thomas/Demotix/Corbis It's kicking off on campus again.

Almost three years since nationwide college occupations, marches and strikes against tuition fee rises led to the first wave of crackdowns on student protest, undergraduates are mobilising, and meeting unprecedented retaliation. Last week in Bloomsbury, central London, students organising for fair wages for workers at their institutions said they were beaten bloody. There were mass arrests, and the sort of court injunctions banning all further protest that wouldn't be tolerated in any country that valued freedom of speech. London students defy university protest ban. Aljazeera: London students demand: #CopsOffCampus. Were police too tough on the student protests?

Rt: How government is criminali- zing student dissent. Beginning his working life in the aviation industry and trained by the BBC, Tony Gosling is a British land rights activist, historian & investigative radio journalist. Published time: December 06, 2013 16:54 Students protest against austerity measures as they march past 10 Downing Street, residence of Britain's Prime Minister David Cameron in London (Reuters / Chris Helgren) "Education is a system of imposed ignorance" – these words describe admirably the machinations of the Cameron government in the UK education sector.

This quote by Noam Chomsky, which appeared in the 1994 Canadian documentary, “Manufacturing Consent,” was originally designed at the time to provoke as much as to warn against vested interests in teaching. Under PM David Cameron, Britain's centers of learning are deteriorating from colleges where young people are educated into loathsome institutions where they are told what to think. Phones will be tapped, emails read, social networks studied with or without a court order. Copsoffcampuses.tumblr. Aaron Bastani: ‘Official protest’ is no protest at all. People being detained by the police on 7th September Tower Hamlets demonstration.

Photograph: Matthew Taylor In the face of increasingly draconian policing, freedom of assembly is threatened When 286 people were arrested for protesting against the EDL in Tower Hamlets on 7th September, I wrote at the time that few of those arrested were likely to be charged, much less convicted, of any offence. This intuition has been proven correct: all but two have had all potential charges dropped. The remaining two arrestees have been re-bailed until January. TOTAL PROTEST: copsoffcampuses.tumblr. Intimidation has no place in a seat of learning. Policing on campus is a brazen attack on free speech. Relations between student protesters and police in universities have broken down. On the University, protest and a post-capitalist imagination. Marx was clear that given the nature of capitalist social relations, there can be no balanced growth or equilibrium reached inside production for the market. The history of crises, and of both State and transnational responses to those crises, crystallises that reality further.

Bail Conditions point the way to the potential future of protest. This is a guest post by Harry Stopes (@HarryStopes) The use of restrictive bail conditions on protestors, many of whom have been arrested en masse, is a worrying trend evident in policing over the last two and a half years. UK campus protests: Who said what? Cops off campus, now! Last week, London’s village-like Bloomsbury area became a battleground between students and police. In two days, 43 arrests were made, and several videos appearing to show police brutality are now circling the internet.

Storify: #occupy #copsoffcampus: The Rise of Student Dissent Winter 2013 (with images, tweets) · hopelesscynic1. University of London v-c steps into student protests row. Sir Adrian Smith suggests protesters wanted police involved to generate ‘headlines’ Student protest. The trouble with government as it is, is that it doesn’t represent the people.

It controls them. — John Lennon If you want a vision of the future, imagine a boot stamping on a human face — forever. — George Orwell, Nineteen Eighty-Four The height of student protest was the late 1960s, early 1970s, then nada. Alice Gambell: The police presence on campus is radicalising students. University of strife: John Harris on the latest wave of student protests. Brutal Repression of Students in UK Amid Mainstream Media Blackout - revolution. The student protests this week mark the handover to a new generation. Police violence and the assault on education. 41 Arrests Made At University Of London Students' Protests (PICTURES, VIDEO) Multiple arrests as hundreds of student protesters clash with police in central London - News - Student.

Counter-hegemonic media empires? : Mark Bergfeld. Cops off Campus: A reflection on police presence – a Birkbeck Student’s experience. Police deploy paradoxical kettle as students arrested for protesting about students being arrested at a protest against the arrest of students. Police at #copsoffcampus protest. #copsoffcampus: Student anger boils over as police campus crackdown intensifies. Pi Media » Cops off Campus: Round Two. MMENT: It's time to stop the crackdown on student protest - SQ Magazine.