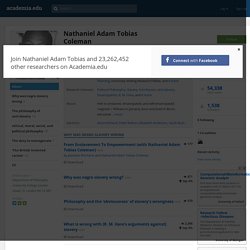 This dissertation consists in three chapters: In the first chapter—Social stigmatisation: 'a social tyranny'—I argue that persons racialised-and-gendered-as-black-women were, in the past, unjustly stigmatised by legal penalties against 'miscegenation' and are still, today, unjustly stigmatised by white male avoidance of cross-racial marriage and companionship. In the second chapter—Encounters that count: 'a foundation for solid friendship'—I argue that we can dismantle this stigmatisation, by engaging in regular and frequent cross-racial commensality with persons racialised-and-gendered-as-black-women. 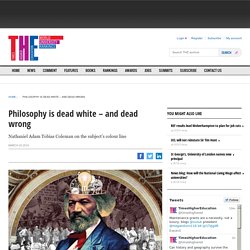 Yet, philosophers have not tended to treat such persons as philosophers 1841 For Solomon Northup, it marked the beginning of “12 Years a Slave”, but for Frederick Douglass, it marked the beginning of 50 years a public speaker. Reflecting on that beginning, Douglass tells us – in the second of his three autobiographies, My Bondage and My Freedom (1855) – that “[d]uring the first three or four months, my speeches were almost exclusively made up of narrations of my own personal experience as a slave. ‘Let us have the facts,’ said the people. Let’s reflect critically on this notion of “taking care of the philosophy”, by considering, on the one hand, who gets to do philosophy and, on the other, what gets done in philosophy. On the one hand, Douglass doesn’t get to do philosophy. On the other hand, Douglass doesn’t “get done” in philosophy.

I conclude with a reply to Collins: Black academic claims he was denied university job over his plans to 'put white hegemony under the microscope' - Home News. Dr Nathaniel Coleman, who crosses out his surname to “highlight the stigmatising expressive meaning” of the “badge” given to his forebears by slave owners, said his proposals for a new black studies MA were opposed by University College London colleagues seeking something less critical of the white Establishment. 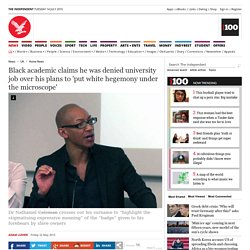 UCL has postponed plans for the new MA and with no course to teach, he will be out of a job when his fixed-term contract at the philosophy department expires in October. The academic, who has a double first in greats from Oxford University, said that he became just one of five black philosophy academics in UK universities when he joined UCL as Britain’s first research associate in the philosophy of “race” in October 2013. His new MA, he claimed, would have upset some in white-dominated academia. “White hegemony was … to be put under the microscope,” he told Times Higher Education.

Loading gallery Top ranking universities in the UK. PIQ 28.2.15. Why Is The University Still White? Readers of New APPS may recall Nathaniel Adam Tobias Coleman as the author of a powerful piece last March in Times Higher Education that drew attention to the discipline of philosophy’s overall, systemic failure to critically engage its own Whiteness. 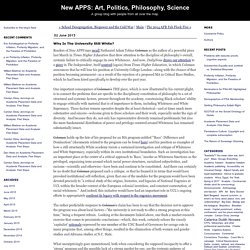 And now, DailyNousdraws our attention to a piece in The Independent, itself sourced (again) from Times Higher Education, in which Coleman announces that he will lose his position at University College London—along with the chance of that position becoming permanent—as a result of the rejection of a proposed MA in Critical Race Studies, which he had been hired specifically to develop over the past year. The rather predictable response to Coleman's claim has been to say that the decision not to approve the program was about local factors—"the university is not ready to offer a strong program at this time," being a frequent refrain.

By now, everyone should be familiar with this dance, which is about producing plausible deniability. Rejected MA was too critical of white establishment, says academic. Source: Alamy Stuck in the past: much of Dr Coleman’s work has concentrated on whether UCL has favoured ‘dead white men’ 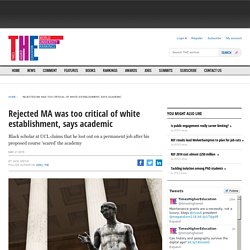