Workers on a picket line outside Senate House on Wednesday morning. 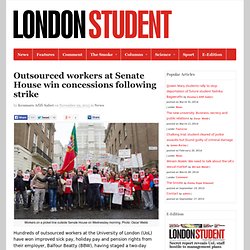 Photo: Oscar Webb Hundreds of outsourced workers at the University of London (UoL) have won improved sick pay, holiday pay and pension rights from their employer, Balfour Beatty (BBW), having staged a two-day strike and protest this week. It was announced on Thursday that the workers – who include cleaners, security guards and receptionists – will be entitled to sick pay if they have been in their job for over three months. In addition, those employed for over three years will receive 25 days annual leave, with all other employees being entitled to 22 days off. Moreover, the workers will all be able to join Balfour Beatty’s pension scheme, details of which will be made available in the next few weeks. The concessions come after a two-day strike by the workers from Wednesday to Thursday, which saw the library being closed and which coincided with a royal visit to the university. AaronBastani : Unrecognised union is winning... Cleaners' campaign defies university protest ban.

A campaigner shouting slogans outside the gates of Senate House. 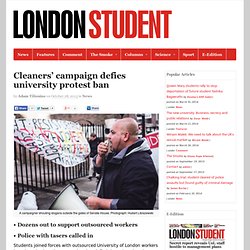 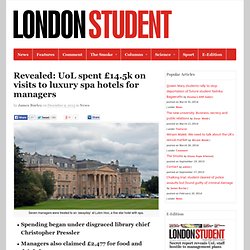 Spending began under disgraced library chief Christopher PresslerManagers also claimed £2,477 for food and drink from Pret A Manger The University of London (UoL) has spent thousands of pounds on trips to luxury spa hotels for the senior management of Senate House Libraries (SHL), London Student can reveal. A Freedom of Information request showed that £14,562 of university money was spent on four trips to luxury hotels and spa resorts for SHL’s senior management, who earn salaries ranging between £45,000 and £100,000.

3CosasCampaign : Disciplinary procedures initiated... LondonStudent : @3CosasCampaign @UoLondon... There's no money in the bank,you see. A survey showed the Russell Group universities - which represents 24 of the most selective higher education institutions in the country – awarded pay rises of 8.1 per cent on average to their vice-chancellors while overall benefits packages also soared by 5.2 per cent. 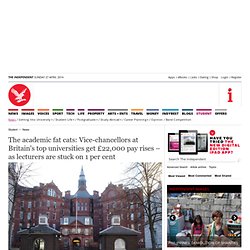 In many cases, argued union leaders, the rises themselves were more than the annual salary of their staff - now locked in a pay dispute after rejecting a one per cent pay offer. How Academia Resembles a Drug Gang. Academic systems rely on the existence of a supply of “outsiders” ready to forgo wages and employment security in exchange for the prospect of uncertain security, prestige, freedom and reasonably high salaries that tenured positions entail. 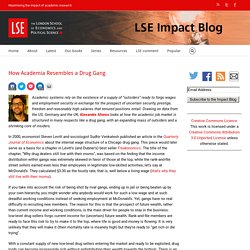 Drawing on data from the US, Germany and the UK, Alexandre Afonso looks at how the academic job market is structured in many respects like a drug gang, with an expanding mass of outsiders and a shrinking core of insiders. In 2000, economist Steven Levitt and sociologist Sudhir Venkatesh published an article in the Quarterly Journal of Economics about the internal wage structure of a Chicago drug gang. This piece would later serve as a basis for a chapter in Levitt’s (and Dubner’s) best seller Freakonomics. With a constant supply of new low-level drug sellers entering the market and ready to be exploited, drug lords can become increasingly rich without redistributing their wealth towards the bottom. 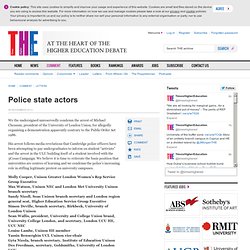 His arrest follows media revelations that Cambridge police officers have been attempting to pay undergraduates to inform on student “activists” and the arrest in the ULU building itself of a student involved with the 3Cosas Campaign. We believe it is time to reiterate the basic position that universities are centres of learning and we condemn the police’s increasing role in stifling legitimate protest on university campuses. Click to rate. Unions unite to protest ULU president’s arrest. Open letter from around 100 staff condemns police action. 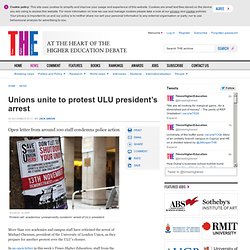 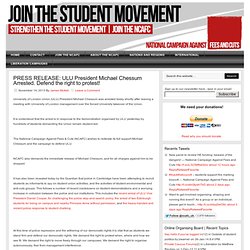 It is understood that the arrest is in response to the demonstration organised by ULU yesterday by hundreds of students demanding the Union remain student-led. The National Campaign Against Fees & Cuts (NCAFC) wishes to reiterate its full support Michael Chessum and the campaign to defend ULU. NCAFC also demands the immediate release of Michael Chessum, and for all charges against him to be dropped. It has also been revealed today by the Guardian that police in Cambridge have been attempting to recruit students as informants to spy on student union activities, and the activities of student environmental and anti-cuts groups. This follows a number of recent crackdowns on student demonstrations and a worrying increase in collusion between the police and our institutions.

Protest, Free Assembly and the Political Management of Austerity. TOTAL PROTEST: copsoffcampuses.tumblr. NUS ‘could do more’ to support protesters. Chalking Trial: police officer falsely claimed to witness assault. Ms Duff being arrested outside ULU on 16th July 2013 • Defence footage shows constables’ view was obstructed • Student was arrested after writing in chalk on UoL property A police constable falsely claimed to witness a student assaulting another officer because he was told to by colleagues, a court heard today. 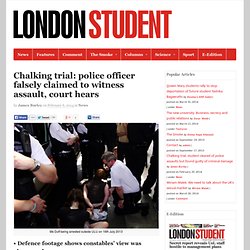 The defence for Ms K Duff, who was arrested after writing in chalk on University of London (UoL) property in July 2013, accused special constable David Inwood of “simply corroborating what you were told to” when he claimed to see her kick an officer in the leg. Defence barrister Benjamin Newton showed Highbury Corner Magistrates’ Court video footage in which SC Inwood is seen positioned behind a van door that obstructs his view of where he claimed to have seen Duff assault police constable Siobhan O’Grady on Malet St.

After showing the clip, Newton told SC Inwood: “You didn’t see anyone get assaulted.” The public service trade union. DATES FOR NATIONAL SPEAKER TOUR – STARTING NEXT WEEK, 17th Feb! UNISON - wikipedia. UNISON is the second largest trade union in the United Kingdom[4] with over 1.3 million members. 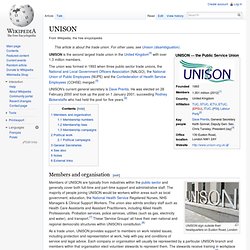 The union was formed in 1993 when three public sector trade unions, the National and Local Government Officers Association (NALGO), the National Union of Public Employees (NUPE) and the Confederation of Health Service Employees (COHSE) merged.[5] UNISON's current general secretary is Dave Prentis. He was elected on 28 February 2000 and took up the post on 1 January 2001, succeeding Rodney Bickerstaffe who had held the post for five years.[6] Members and organisation[edit] UNISON sign outside their headquarters on Euston Road, London Members of UNISON are typically from industries within the public sector and generally cover both full-time and part-time support and administrative staff. As a trade union, UNISON provides support to members on work related issues, including protection and representation at work, help with pay and conditions of service and legal advice.