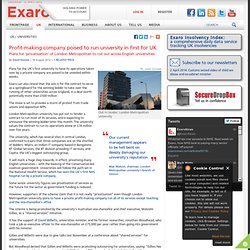 Exaro can also reveal that the aim is for the contract to serve as a springboard for the winning bidder to take over the running of other universities across England, in a deal worth potentially more than £500 million. The move is set to provoke a storm of protest from trade unions and opposition MPs. London Metropolitan university has put out to tender a contract to run most of its services, and is expecting to announce the winning bidder later this month.

London Metropolitan University to outsource most services to private firm. A London university has drawn up an ambitious outsourcing programme in which a swath of services, from managing its estates to marketing and finance, will be carried out by a private firm. 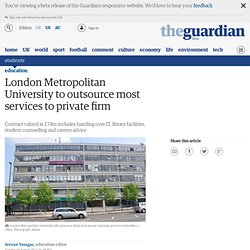 London Metropolitan University, which has more than 16,000 undergraduate students, has produced a tendering document under which all services except teaching and the vice-chancellor's office will be outsourced. The contract is valued at £74m over five years, according to the Exaro News website. The services include IT, library facilities and student services, such as counselling and careers advice.

Three companies – Wipro, BT Global Services and Capita – are on the university's current shortlist. Universities in talks to outsource services - Education News - Education. Unions have reacted angrily and threatened to take industrial action to stop the proposed deals, which they claim amount to privatisation. 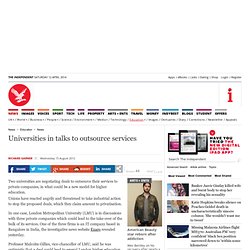 In one case, London Metropolitan University (LMU) is in discussions with three private companies which could lead to the take-over of the bulk of its services. One of the three firms is an IT company based in Bangalore in India, the investigative news website Exaro revealed yesterday. Professor Malcolm Gillies, vice-chancellor of LMU, said he was optimistic that a deal could lead to several London higher education institutions benefiting from shared services.

He said the university was seeking to reduce its in-house support staff by as much as 40 to 50 per cent. He added that "a lot of universities" were considering how they could do the same. LMU insists it would simply be paying an operating fee to the selected company which would have "zero ownership" of the business. Tender document details how company will run university. London Metropolitan University in talks to privatise support services. Website URL : 15 August 2012. 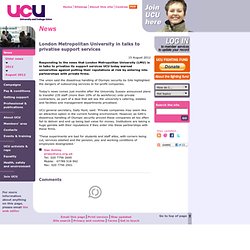 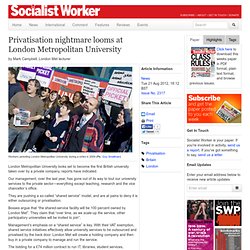 Our management, over the last year, has gone out of its way to tout our university services to the private sector—everything except teaching, research and the vice chancellor’s office. They are pushing a so-called “shared service” model, and are at pains to deny it is either outsourcing or privatisation. Markucu : We won't allow London Met Uni... Rod Aldridge. Sir Rodney Malcolm Aldridge OBE, FRSA (born 7 November 1947[1]) is the Founder and former Executive Chairman of Capita, a British company specialising in business process outsourcing, and currently Chairman of The Aldridge Foundation, which encourages young people to create their own social change, using an entrepreneurial mindset, and is the sponsor of three Academies in Darwen, Brighton and Portslade.[2] Present work[edit] Background[edit] Aldridge founded and led the Capita Group from its formation in 1984 until 2006. 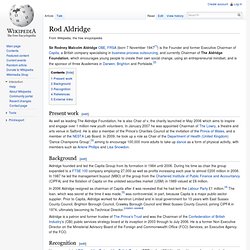 During his time as chair the group expanded to a FTSE 100 company employing 27,000 as well as profits increasing each year to almost £200 million in 2006. Capita plc. Capita Group. Capita plc (LSE: CPI), commonly known as Capita, is an international business process outsourcing and professional services company headquartered in London, United Kingdom. 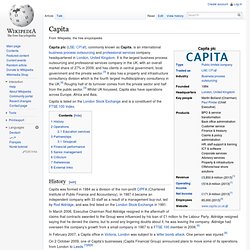 It is the largest business process outsourcing and professional services company in the UK, with an overall market share of 27% in 2009, and has clients in central government, local government and the private sector.[3] It also has a property and infrastructure consultancy division which is the fourth largest multidisciplinary consultancy in the UK.[4] Roughly half of its turnover comes from the private sector and half from the public sector.[3] Whilst UK focussed, Capita also have operations across Europe, Africa and Asia. Capita is listed on the London Stock Exchange and is a constituent of the FTSE 100 Index. History[edit] Capita was formed in 1984 as a division of the non-profit CIPFA (Chartered Institute of Public Finance and Accountancy). Azim Premji.

Azim Hashim Premji (born 24 July 1945) is an Indian business tycoon and philanthropist who is the chairman of Wipro Limited, guiding the company through four decades of diversification and growth to emerge as one of the Indian leaders in the software industry. 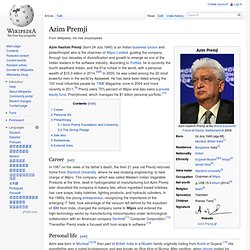 According to Forbes, he is currently the fourth wealthiest Indian, and the 61st richest in the world, with a personal wealth of $15.3 billion in 2014.[5][8] In 2000, he was voted among the 20 most powerful men in the world by Asiaweek. He has twice been listed among the 100 most influential people by TIME Magazine, once in 2004 and more recently in 2011.[9] Premji owns 75% percent of Wipro and also owns a private equity fund, PremjiInvest, which manages his $1 billion personal portfolio.[10] Career[edit] In 1967 on the news of his father's death, the then 21 year old Premji returned home from Stanford University, where he was studying engineering, to take charge of Wipro.

Wipro IT Business, IT Services, Consulting, BPO, System Integration, Outsourcing. Wipro. Wipro Limited (formerly Western India Products Limited[1]) is a multinational IT Consulting and System Integration services company headquartered in Bangalore, Karnataka, India.[5][6] As of December 2013, the company has 147,000 employees servicing over 900 large enterprise corporations with a presence in 61 countries.[7] Wipro is the third largest IT services company in India and 7th largest worldwide [8] On 31 March 2013, its market capitalisation was 1.07 trillion ($19.8 billion), making it India's 10th largest publicly traded company.[9] Azim Premji is a major shareholder in Wipro with over 50% of shareholding.[10] To focus on core IT Business, it demerged its non-IT businesses into a separate company named Wipro Enterprises Limited with effect from 31 March 2013.[11] The demerged company offers consumer care, lighting, healthcare and infrastructure engineering and contributed to approx. 10% of the revenues of Wipro Limited in previous financial year.[12][13] History[edit] 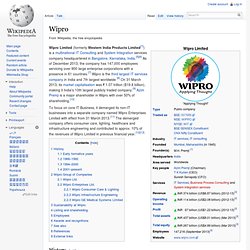 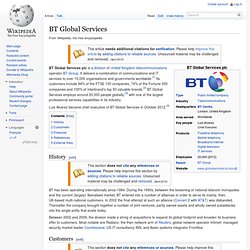 During the 1990s, between the loosening of national telecom monopolies and the current (largely) liberalised market, BT entered into a number of alliances in order to serve its mainly, then, UK-based multi-national customers. In 2002 the final attempt at such an alliance (Concert 2 with AT&T) was disbanded. Thereafter the company brought together a number of joint ventures, partly owned assets and wholly owned subsidiaries into the single entity that exists today.

Between 2002 and 2009, the division made a string of acquisitions to expand its global footprint and broaden its business offer to customers. Networked IT services from BT Global Services UK. London Metropolitan University's visa licence revoked. 30 August 2012Last updated at 13:16 ET Emmanuel Egwu, student: "People are panicking.

What is going to happen now? " More than 2,000 students potentially face removal after a university had its licence to teach and recruit students from outside the EU revoked. 'One strike and you're out' sends a damaging message to the world. The UKBA's revocation of London Met's licence to accept non-EU students is detrimental to our global reputation, says Eric Thomas It's transformed people's perceptions of the country," said the double-amputee sprinter Oscar Pistorius of the support he and his fellow Paralympic athletes had enjoyed in London, a few moments after smashing the T44 200m world record last Saturday. Just a few miles west, on the Holloway Road, perceptions were also being changed, and not for the better.

Hundreds of overseas students do not return to London Met. Fewer than 45 per cent of continuing overseas students at London Metropolitan University have committed to stay with the troubled institution, given the choice of staying or transferring elsewhere. The task force to help London Met students find new courses at other higher education institutions held its final meeting yesterday. The UK Border Agency stripped London Met of its licence to sponsor non-EU students after finding the institution in breach of immigration requirements. However, a High Court judge granted the university permission to seek a judicial review of that decision. The judge also granted "interim relief" to overseas students currently enrolled at the university or with an offer of a place for this year, provided they have proper immigration status.

This means such students can complete their course or complete the 2012-13 academic year at London Met, whichever is sooner. Students also have the option of transferring to another institution. London Met: the full impact on UK universities is yet to be measured. Business school sheds staff and courses as visa rules bite.