The Call of The Wild - Jack London 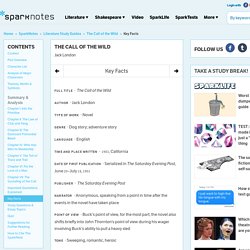 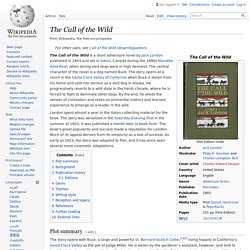 The central character of the novel is a dog named Buck. The story opens at a ranch in the Santa Clara Valley of California when Buck is stolen from his home and sold into service as a sled dog in Alaska. He progressively reverts to a wild state in the harsh climate, where he is forced to fight to dominate other dogs. By the end, he sheds the veneer of civilization and relies on primordial instinct and learned experience to emerge as a leader in the wild. London spent almost a year in the Yukon collecting material for the book.

Plot summary[edit] The team is then sold to a "Scottish half-breed" man working the mail service. Buck's next owners are a trio of stampeders (Hal, Charles, and a woman named Mercedes from the United States), who are inexperienced at surviving in the Northern wilderness. Call of the Wild Quizzes. Buck Timeline in The Call of the Wild. Quiz. After Spitz's death, which dog becomes the lead dog? 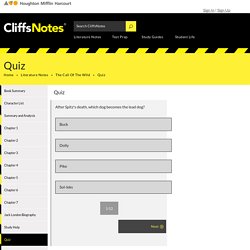 BuckDollyPikeSol-leks Please select an option Buck's first master is a boy in Englanda servant named Manuela well-to-do judge in Santa Clara Valley, Californiaan Indian named Gray Beaver How does Buck get to Seattle? He is sold to dognappers because of a gambling debt.He is stolen.He is traded for whiskey.He wanders there while trying to find his way home. Once Buck acclimates to life in the Northland, what does he feel when he hears the wild sounds and calls that come from deep in the forest? FearLustRageYearning What breed of dog is Buck? He is German Shepherd.He is half Malamute Husky and half Samoyed.He is half Saint Bernard and half Scotch shepherd.He is three-quarters wolf and one-quarter dog of an unknown breed. What does Francois bring to Buck to make his life easier?

A pound of food more than the other dogs each dayA sweaterMoccasins that fit over his pawsWhiskey to keep him warm. Book Summary. Buck, a huge, four-year-old half-Saint Bernard and half-Scottish shepherd dog, is living a life of civilized ease in California's Santa Clara Valley in the home of Judge Miller. 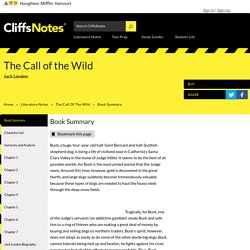 It seems to be the best of all possible worlds, for Buck is the most prized animal that the Judge owns. Around this time, however, gold is discovered in the great North, and large dogs suddenly become tremendously valuable because these types of dogs are needed to haul the heavy sleds through the deep snow fields. Tragically, for Buck, one of the Judge's servants (an addictive gambler) steals Buck and sells him to a ring of thieves who are making a great deal of money by buying and selling dogs to northern traders. Buck's spirit, however, does not adapt as easily as do some of the other docile big dogs. Buck cannot tolerate being tied up and beaten; he fights against his cruel new master, but all of his efforts to escape are futile. The Call of the Wild: Analysis of Major Characters.

Buck Although The Call of the Wild is told from the perspective of an anonymous third-person narrator, the events that are recounted are those that the dog Buck experiences directly. 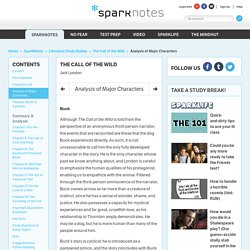 As such, it is not unreasonable to call him the only fully developed character in the story. He is the only character whose past we know anything about, and London is careful to emphasize the human qualities of his protagonist, enabling us to empathize with the animal. Filtered through the third-person omniscience of the narrator, Buck comes across as far more than a creature of instinct, since he has a sense of wonder, shame, and justice.

He also possesses a capacity for mystical experiences and for great, unselfish love, as his relationship to Thornton amply demonstrates. Buck’s story is cyclical: he is introduced as a pampered prince, and the story concludes with Buck as a veritable king of beasts. John Thornton Hal, Charles, and Mercedes. AW CalloftheWild. Call Of The Wild Worksheet - Free Printable Worksheets. Jack London's Naturalism: The Example of The Call of the Wild. BOTH JACK LONDON'S intentions and his accomplishments in The Call of the Wild account for the artistic success of the book. 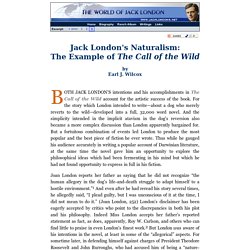 For the story which London intended to write—about a dog who merely reverts to the wild—developed into a full, 32,000 word novel. And the simplicity intended in the implicit atavism in the dog's reversion also became a more complex discussion than London apparently bargained for. But a fortuitous combination of events led London to produce the most popular and the best piece of fiction he ever wrote. Thus while he gauged his audience accurately in writing a popular account of Darwinian literature, at the same time the novel gave him an opportunity to explore the philosophical ideas which had been fermenting in his mind but which he had not found opportunity to express in full in his fiction.

I have been guilty of writing two animal stories—two books about dogs. He saw, once for all, that he stood no chance against a man with a club. So that was the way. C. The Symbolism in Jack London's "Call of the Wild" Quiz & Worksheet - The Call of the Wild Summary & Characters. Explore our library of over 10,000 lessons Click "next lesson" whenever you finish a lesson and quiz. 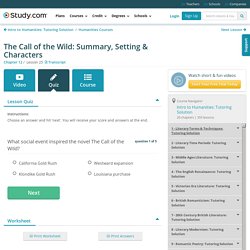 Got It You now have full access to our lessons and courses. Watch the lesson now or keep exploring. Got It You're 25% of the way through this course! Passing a quiz is how you gain course progress. You're getting the hang of this! Look how far you've come! You've just passed 20 quizzes and earned a new badge! Congratulations, you just completed 50 quizzes! 100 quizzes complete and a new badge earned.