Why London Should Stop Trying to Be New York and Start Trying to Be Paris. Watch out New York, London is coming for you. 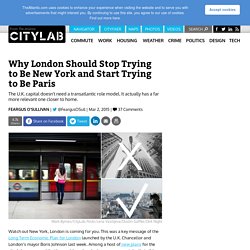 This was a key message of the Long Term Economic Plan for London launched by the U.K. Chancellor and London's mayor Boris Johnson last week. Among a host of new plans for the city, Johnson vowed that he would see London's economy overtake that of its great rival across the Atlantic. He won't do so in office, of course—he's stepping down next year—but it's certainly true that London's powers-that-be have been taking many cues from its transatlantic sister city recently.

Whether it's building higher and flashier, rebranding its neighborhoods, or aping food trends, New York has been cited as an influence and, among a small elite at least, a benchmark against which progress can be judged. Is this a good thing perhaps, an example of friendly sparring between two great cities? If that sounds harsh, let me outline the difficulties the U.K. capital faces. Paramedic: most patients we take into A&E don’t need to be there. The emergency care provision in the UK has been cracking for years, it just so happens that this winter it has collapsed. 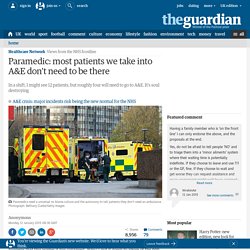 Why? I put it down to abuse of the 999 system. This can be unintentional, malicious or due to a lack of available primary care. In the ambulance service a “what if” culture prevails, causing healthcare professionals to be cautious to protect their registration – some paramedics fear repercussions if their decision to leave someone at home is questioned. A typical 12-hour shift should, but rarely does, include a 15-minute check of the ambulance and its contents and a couple of meal breaks. One job I recall concerned a young person who was pretending to be unwell, but we couldn’t leave them with their family. Why do people call 999 when they shouldn’t? Why are these patients resourced an ambulance, sometimes even when they call NHS 111? Current public education isn’t working and throwing money at services won’t deal with the problem. 'Cool' London is dead, and the rich kids are to blame.

As for the bits of London that always were rich - Mayfair, Chelsea and Kensington, they’ve moved up to the next level. 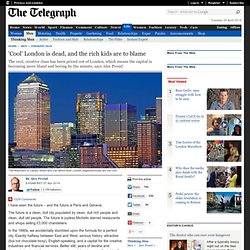 Ultra-prime central London is fast becoming a ghost-town where absentee investors park their wealth. As some wag put it, houses in Mayfair are now bitcoins for oligarchs. So, what does this have to do with Paris and Geneva? The answer is that both are places where the rich have socially cleansed the centres. Inner Paris is a fairytale for wealthy people in their fifties (and outer Paris looks like Stalingrad with ethnic strife) while Geneva has dispensed with the poor altogether. Why? READ: Lawless London is keeping its cool, not losing it (Nick Compton replies to Alex Proud) The international rich – a mixture of Eurotrash and Middle-Eastern Princelings – are worse still. Let's make inner cities cool again: a call to arms! If Alex Proud's article on the Telegraph is right, "cool London is dead and the rich kids are to blame," then we need to assert ourselves differently and Bertie Brandes has found a way... 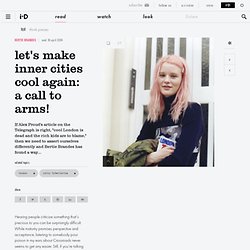 Hearing people criticize something that’s precious to you can be surprisingly difficult. While maturity promises perspective and acceptance, listening to somebody pour poison in my ears about Crossroads never seems to get any easier. Still, if you’re talking about something slightly more significant than Britney Spears’ debut feature film (I’m being sarcastic if you can’t tell, because nothing is more significant than that) sometimes getting the bigger picture can be a blessing. It was with some reluctance that I read Alex Proud’s article about the death of “cool” London. The title is, let’s be honest, rather off-putting, and as somebody who feels they know this city rather well (doesn’t every Londoner) I was ready to dismiss it as a glorified trend report dressed up as journalism. @BertieBrandes. London’s cutest street and park — London bits. 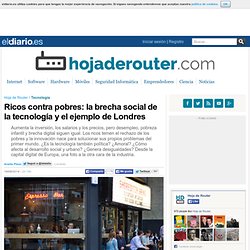