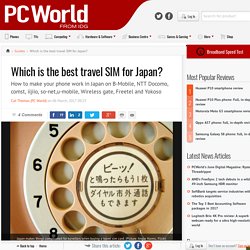 It comes as a surprise then to many visitors that the WiFi coverage is patchy and getting a full prepaid mobile service is nigh on impossible. Even just sorting out mobile data packages can be remarkably complicated. In most countries you can simply grab a prepaid SIM and you’re pretty much set, besides fiddling with a few APN settings. Not so in Japan. Governmental restrictions for non-residency card holders mean that getting a full service including voice, messaging and data is both expensive and subject to strict time limitations.

A government survey in late 2015 found that 28.6 per cent of visitors to Japan had intended to buy SIMs but only 13.2% did. Will my phone work in Japan? Check up on a couple of hardware factors. A straightforward way to check the second one is to go into your phone’s settings menu. Next choose ‘Japan’. Also make sure that you know if your handset takes a micro, or nanoSIM card. 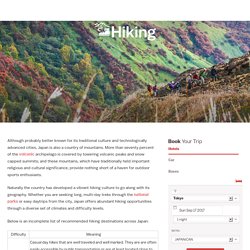 More than seventy percent of the volcanic archipelago is covered by towering volcanic peaks and snow capped summits; and these mountains, which have traditionally held important religious and cultural significance, provide nothing short of a haven for outdoor sports enthusiasts. Naturally the country has developed a vibrant hiking culture to go along with its geography. Whether you are seeking long, multi-day treks through the national parks or easy daytrips from the city, Japan offers abundant hiking opportunities through a diverse set of climates and difficulty levels. Below is an incomplete list of recommended hiking destinations across Japan: Ratings: best of the best best of Japan outstanding Around Tokyo Less than an hour from central Tokyo, Mount Takao is one of the closest nature spots to the city.

Around Kyoto Around Osaka Hokkaido Tohoku Region Kyushu. Best walks, hikes and treks in Japan. An exceptional country, in its own and in others’ view, Japan has throughout history been isolated, an island nation out on the periphery of Asia. 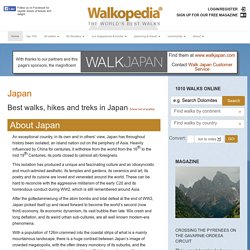 Heavily influenced by China for centuries, it withdrew from the world from the 16th to the mid 19th Centuries, its ports closed to (almost all) foreigners. This isolation has produced a unique and fascinating culture and an idiosyncratic and much-admired aesthetic: its temples and gardens, its ceramics and art, its poetry and its cuisine are loved and venerated around the world. These can be hard to reconcile with the aggressive militarism of the early C20 and its horrendous conduct during WW2, which is still remembered around Asia. After the gottedammerung of the atom bombs and total defeat at the end of WW2, Japan picked itself up and raced forward to become the world’s second (now third) economy. 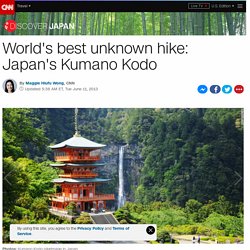 Run a rolling pin over your calves a few times and you'll get an idea of what I was looking at. Already exhausted from hiking Kumano Kodo's ancient trails in the Kii Mountains -- the route starts about an hour by train from Osaka -- the only things pushing me upward were the encouraging smiles from a grandpa, a girl wearing a long maxi-dress and salarymen in stiff shirts and dress pants who walked past me as if they were taking a stroll to the grocery store. So, was that uphill torture worth it? Of course -- what great hike isn't?

Anyway, the rest of the trail was relatively easy to get through -- the biggest obstacle was all the stops for photos. And there is good reason for that. When I say unexplored, I mean for international travelers. This guide will give you all to know to capture a truly epic adventure. Kiso Valley and the Nakasendo Road – Go! Nagano. Go back in time, way back, to the Edo Era, and walk the old Nakasendo Road along the scenic, forested Kiso Valley. 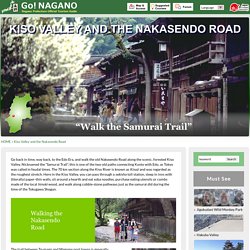 Nicknamed the “Samurai Trail”, this is one of the two old paths connecting Kyoto with Edo, as Tokyo was called in feudal times. Make your trip to Japan more convenient. * TA-Q-BIN is Door to Door Parcel Delivery Service. 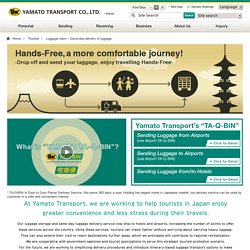 We serve 365 days a year. Holding the largest share in Japanese market, our delivery service can be used by customer in a safe and convenient manner. Available Services The services offered are different for every service office. Luggage Storage We can hold your luggage during the day. Same-Day Luggage Delivery We deliver your luggage from the airport or station to the place you designate, such as your hotel, in the same day. Luggage / Souvenirs Delivery We deliver your luggage / souvenirs to any place across Japan on the next day (excluding certain regions). Tourist Information We can provide you information about sightseeing spots. List of facilities.