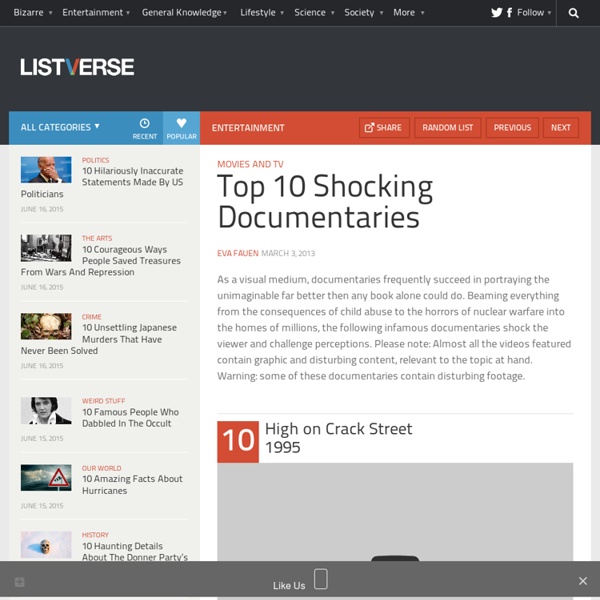 Movies and TV As a visual medium, documentaries frequently succeed in portraying the unimaginable far better then any book alone could do. Beaming everything from the consequences of child abuse to the horrors of nuclear warfare into the homes of millions, the following infamous documentaries shock the viewer and challenge perceptions. Please note: Almost all the videos featured contain graphic and disturbing content, relevant to the topic at hand. Warning: some of these documentaries contain disturbing footage. High on Crack Street Following the struggle of three crack addicts, ‘High on Crack Street’ digs deep into the complex daily lives of individuals striving to obtain their next fix. Aokigahara / Suicide Forest Lying at the base of Mount Fuji, Aokigahara Forest has a rather unsettling reputation as a suicide hotspot . Nuit et Brouillard The Killing of America Interview with a Cannibal What drives a man to kill and cannibalize an innocent woman? Bulgaria’s Abandoned Children

25 Spectacular Movies You (Probably) Haven't Seen Midnight in Paris Woody Allen’s latest places starving writer Owen Wilson in Paris with his fiancée, Rachel McAdams. Searching for inspiration for his incomplete novel, Owen begins taking strolls around the city at night where he discovers an unexpected group of people. LEAKED NORTH KOREAN DOCUMENTARY ‘EXPOSES WESTERN PROPAGANDA’ (AND IT’S SCARY HOW TRUE IT IS) Sabine is a YouTube user who, during a visit to family living in South Korea in April of this year, was given a DVD by a man and a woman claiming to be North Korean “defectors”, and was asked to translate the film so it could be posted on the internet and reach a wider audience. What the DVD turned out to be was something much more than Sabine, or anyone else, probably would’ve imagined, and something that certainly has found a widespread audience on the internet over the last month or so – it was a film called “PROPAGANDA”, a documentary about capitalism, imperialism, mass manipulation of western culture for the purpose of commodification, and how it permeates every aspect of the lives of blissfully ignorant, borderline zombie masses. And jesus, is it on the fucking money. From the video’s description - North Korea in the 1980s The movie opens:

25 Documentaries Everybody Should Watch Sans Soleil This is not your average documentary. It is a fleeting memory, a sudden remembrance of times long past, a meditation on time and culture, a touch of an emotional diary. Silk-Dyed Eggs {aka TIE-Dyed!} I posted this tutorial a few years ago and it has become somewhat of a tradition to bring it back every year! One of our family Easter traditions is dying eggs with pieces of silk. I saw a cute lady show Martha how to do it a few years ago and I ran upstairs right then to steal a tie! Ranking of Foreign Language OpenCourseWare Education Sources There are many free foreign language courses online, but not all of them are equal in content and quality. Generally, OpenCourseWare doesn't award college credit. Here is a ranking of the best foreign language education sources based on school reputation and breadth of course offerings. Schools offering English degrees can also be found in these popular choices.

The 30 Best Films of the Decade We’re all in that humanistic mode of evaluating our lives – coming up on the end of the year and the last time a zero will be the third digit on our calendars. We’re all (from Variety to Cat Fancy) also waxing expert on what films were the best of the best of the best of the past ten years. Which is why there is an unnavigable sea of opinion polluting the internet right now. Neil and I thought, ‘If everyone else is doing it, why can’t we? And why not do it better?” You may ask (since I’m forcing you to rhetorically), “How can giving your opinion be better than everyone else’s tepid version of an almost-arbitrary-seeming list?”

All Documentaries Welcome to the Must Watch section. It is our understanding that for a truly democratic society to exist, there must be a free flow of easily accessible information. For the most part (not including heavy censorship in China), the Internet has allowed for this free flow of information to everyone and anyone with access to the internet and it is imperative that this right continues to be protected. Unfortunately, the principle of free flowing information does not exist in the mainstream media because our governments continue to allow large corporations to consolidate the entire media industry. For this reason, many facts, perspectives, and opinions do not make it to our televisions, movie theatres, newspapers, and radio stations. How to cut glass I posted a picture about 1 week ago on Instagram, Facebook and Twitter of me cutting glass using just string. I got LOT’S of requests for a tutorial on how I DID THIS! So here it is. FINALLY! You will be able to learn how to cut glass.

Another 12 Mind-Blowing Documentaries To Watch On Netflix Assuming you've already powered through our previous collection of 12 mind-blowing documentaries to watch on Netflix, we've pulled together another set for your non-fiction viewing pleasure. Please binge-watch accordingly. "Shenandoah" In depicting the story of four high school boys who murdered a Mexican immigrant, "Shenandoah" dissects the mob mentality of the small town in which their atrocity took place. Assange: Facebook, Google, Yahoo are Spying Tools In Julian Assange’s exclusive interview with RT he discusses everything from the uprisings in MENA, to his extradition fight, the Guantanamo and US Cable files, his relationship with The Guardian and The New York Times, global political youth movements, the current state of mainstream media and Bradley Manning. He famously warns that social media and in particularly Facebook, Google, Yahoo are among the greatest spy machines ever invented. Once again Mr. Assange demonstrates his intelligence, authenticity and consciousness. The man behind WikiLeaks says his website’s revelations are just the tip of the iceberg.

30 Challenges for 30 Days Did you know that it takes 30 days to form a new habit? The first few days are similar as to how you would imagine the birth of a new river. Full of enthusiasm it gushes forth, only to be met by strong obstacles. The path is not clear yet, and your surroundings don’t agree. Old habits urge you to stay the same.

17 Movies You Should Make Time For – November 17, 2013Posted in: Lists, TV and Movies, Vertical 17 Movies You Should Actually Make Time For 1Share 223Share Related posts: Best World War 2 Documentaries Thanks to the valiant efforts of television producers the world over (and a few dubious cable channels), you don't have to learn about the past through books. Instead, you can sit back, relax and have your history accompanied by genuine footage from the time. This is my list of the best World War 2 documentaries you can buy: some great series haven’t been released.