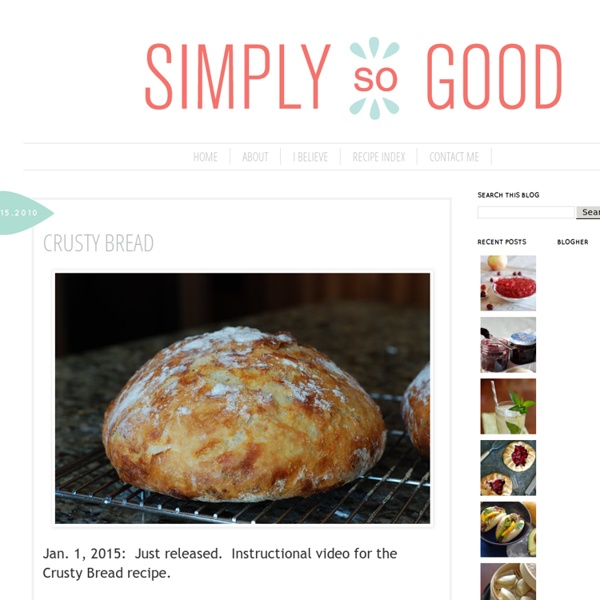 Jan. 1, 2015: Just released. Instructional video for the Crusty Bread recipe. Crusty Bread 3 cups unbleached all purpose flour 1 3/4 teaspoons Kosher salt 1/2 teaspoon Instant or Rapid-rise yeast 1 1/2 cups water In a large mixing bowl, whisk together flour, salt and yeast. I must begin by saying where the recipe originated, if in fact it originated anywhere...really. Remember before beginning to create, that this bread is highly forgiving. You do NOT have to have an enamel covered cast iron pot. You DO NOT need to oil the pot. In a large mixing bowl add 3 cups white unbleached flour. To the flour add 1 3/4 teaspoon salt (I use kosher I like it) and 1/2 teaspoon rapid rise or instant yeast. Whisk the flour, salt and yeast together. Add 1 1/2 cups water. Mix in the water. That's it! Cover the bowl with plastic wrap and let it set for 12 - 18 hours on the counter top. After 12 hours the dough will look like this. Meet my blue Le Creuset. Now, please disregard that this dough has stuff in it.

Nutella Cinnamon Rolls May 10, 2011 | Print | E-mail | Filed under bread, nutella There are some days that I just lose my appetite. It might be because of my mood, or that nothing sounds good, or that I’m in a food rut again and need to spice things up a bit. Ancho Chile Rubbed Steaks with Cuban Sauce Can you believe I'm actually on top of things for Father's Day? This isn't a bad idea for a Father's Day dinner. Of course it depends on what your Father/Husband likes. Crock Pot Bread Baking (Fast Bread in a Slow Cooker) When I moved to the midwest I was introduced to Crock Pot cooking. I had never even seen a slow cooker before and had no idea the range of foods that could be created in a plug-in cooking pot. Since then I have had everything from No-Peek-Chicken, Swedish Meatballs and Peach cobbler, done in one of these magic devices.

Slutty Brownies - StumbleUpon Now I don’t want to over sell this, so I’m going to be conservative and simply say, that these are… The Best Brownies In The WORLD. I know, big statement. They’re called Slutty Brownies because they’re oh so easy, and more than a little bit filthy. They’re best served warm from the oven, with good quality vanilla ice cream (devastatingly I didn’t have any in the freezer this time, so I guess I’ll just have to make them again). They take about 45mins to make, including baking time. The ultimate comfort food, whipped up within the hour. Chinese Steamed Fish – Food Photography Challenge [June 2012] This month’s challenge was fish! It’s not something I typically cook (“things I typically cook” largely being limited to pasta, tacos or eggs) but this is why the food challenge is good for me – to learn how to cook and have fun photographing it :) I got this Chinese Steamed Fish recipe from Poh’s kitchen, a slightly fancier version of the steamed fish that my mum makes. I love that Poh’s recipe has a video – I love watching something being done at least once before I need to do it, I suspect I’m a visual learner.

Oat Orange and Chocolate Chip Muffins Look at that muffin on its side! I dunno know why I did that. Cute? Weird? Who cares…it’s just a muffin being a rebel. Orange and chocolate really have their moment during the month of December. Dark Chocolate Crepe Cake Step # 1 This Saturday is LaNae's birthday and she requested that I make her "THE Crepe cake". I then had a request that I post on my blog a "How to" on the crepe cake. So here goes....The recipe is just a bit complicated. It consists of several chocolate crepes layered with a Hazelnut filling that is basically a Swiss buttercream (I think). It is finished off with a glaze of chocolate ganache. TO DIE FOR!!

So You Know: Cookie Monster's Famous Sugar Cookie Dough Recipe We all know Cookie Monster loves to eat cookies, but it turns out he's quite the baker, too! Cookie Monster's famous cookie dough recipe first appeared in Big Bird's Busy Book, from the 1970's. If you like a bit of nostalgia mixed in with your sugar and eggs, this recipe is for you: If it's difficult to read the instructions above, here they are verbatim: Bakers Royale - StumbleUpon Banana Split Bites ~ A classic ice cream dessert gets mini for some bite size fun. And yes, there is actually a tiny scoop of ice cream tucked inside and underneath the whip cream of those little darlings. Banana Split Mini Bites For once I made something mini for portion control and not just for the cute factor. My little guy had some friends over the other day and of course with a mom who is a baker, the expectation is dessert will not only be good but it will be fun.