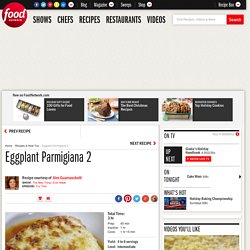 Add the garlic and onions and season with salt and the red pepper flakes. Cook until the onions become translucent, 3 to 5 minutes. Add the sugar and the canned tomatoes. Use a wooden spoon to break up some of the whole tomatoes and cook 10 to 15 minutes over medium heat, stirring from time to time. Taste for seasoning. Lemon Cake with Chocolate Gloppy Frosting Recipe : Alex Guarnaschelli.

Preheat the oven to 350 degrees F. 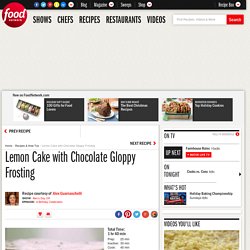 Grease a 9-inch square cake pan with 1 tablespoon of the butter.For the cake: In the bowl of an electric mixer fitted with a whisk attachment (or an electric hand mixer, or by hand), cream the 1 stick of butter and granulated sugar together until smooth, 5 to 8 minutes. As you are creaming the butter and sugar, scrape the sides down with a rubber spatula so you are sure to be combining the butter and sugar as it mixes.In a separate bowl, sift together the flour, baking soda, and salt. 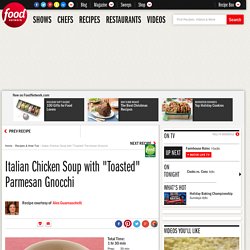 Oven-Dried Mashed Sweet Potatoes Recipe : Alex Guarnaschelli. Preheat the oven to 400 degrees F.Place the potatoes in a single layer on a baking sheet and place them in the center of the oven. 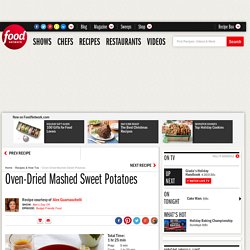 Cook until the potatoes are completely yielding in the center when pierced with the tip of a knife, 45 minutes to 1 hour, depending on the size of a potato. Remove from the oven and lower the temperature to 375 degrees F.Place the potatoes on a flat surface and use a sharp knife to cut down the middle of them lengthwise. Use a tablespoon to scoop out the flesh, leaving the skin behind. Transfer the flesh to a medium, oven proof dish. Stir it slightly to break up any large pieces and place the dish in the oven. Apple Crisp Recipe : Alex Guarnaschelli. Preheat the oven to 375 degrees F. 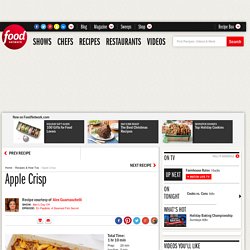 Put the apples on a flat surface. Cut the cheeks from the apple, to remove the core. Cut into fairly thin, but not too thin, slices. Put them in a bowl and add the lemon zest and juice and the orange zest and juice. Toss to coat the apples, then add the molasses, 1/2 teaspoon salt, the cinnamon, ginger, and the nutmeg. Stuffed Artichokes Recipe : Alex Guarnaschelli. Prepare a bowl of cold water large enough to hold the 6 artichoke hearts. 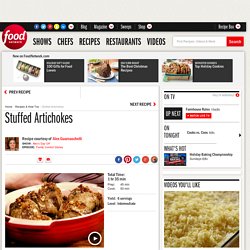 Add the juice of 2 lemons to the water. Use a paring knife to trim the dark green skin from the stem and the base of each artichoke. Also slice about 2 to 3 inches off the top. In a circular motion, using a paring knife or peeler or your hands, peel the outer, dark green bitter layer of the heart until the fleshly, light green part is exposed. Basic Pizza Dough Recipe : Alex Guarnaschelli. In a large bowl, combine the yeast and warm water. 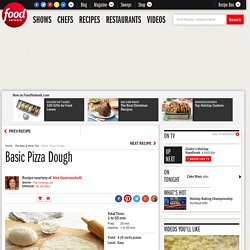 Stir to dissolve the yeast and allow the mixture to rest for 5 minutes.Using a sieve or strainer, "sift" about half of the flour over the yeast mixture and blend until smooth with your hands. Add the salt, pepper and honey and mix to blend. Sift in the remaining flour and mix to blend.Lightly flour a cutting board or flat surface. Turn the pizza dough onto the floured area and knead for 3 to 5 minutes. The flour should feel smooth and the ingredients fully integrated. Simple Birthday Cake with Marshmallow Frosting Recipe : Alex Guarnaschelli. Special equipment: 2 (8 by 2-inch) round cake pans and an instant-read thermometerCake:Preheat the oven to 350 degrees F.Liberally butter the bottom and sides of 2 cake pans. 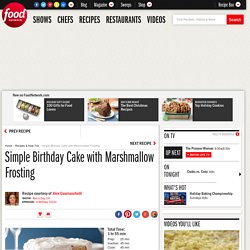 Put a round of parchment paper into the bottom of each pan and coat them with butter. Put the pans on a baking sheet.Melt the 10 tablespoons of butter in a small pot over low heat. Remove the pot from the stove and allow it to cool slightly. Greek Christmas Cookies (Kourambiedes) Recipe : Alex Guarnaschelli. In the bowl of an electric mixer fitted with the whisk attachment, combine the butter and salt and whip until light and fluffy, 3 to 5 minutes. 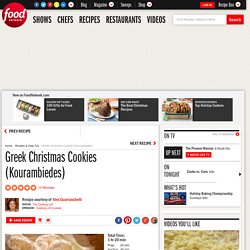 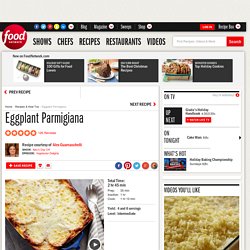 Homemade Cannoli Recipe : Alex Guarnaschelli. Cook's Note: If the ricotta has an excess of liquid, drain it over a strainer for at least a half an hour before making the filling.For the shell dough: In a medium bowl, sift together the flour, sugar and salt. Work the butter pieces into the flour with your fingers until the mixture becomes coarse and sandy. Add the egg yolk and the white wine and mix until it becomes a smooth dough. Spread a piece of plastic wrap on a flat surface and place the dough in the center. Wrap the plastic loosely around it and press the dough to fill the gap. Flattening the dough will mean less rolling later. Crunchy Turkey Salad Sandwiches Recipe : Patrick and Gina Neely.

Momma Callie's Banana Nut Bread with Honey Butter Recipe : Patrick and Gina Neely. Preheat the oven to 350 degrees F and put a rack on the middle shelf. Butter and flour a 9 by 5 by 3-inch loaf pan.In a large bowl, whisk together the flour, baking soda, baking powder and salt.In a separate small bowl, mash the bananas with a wooden spoon, leaving a bit of texture.In another large bowl, use a hand electric mixer or stand mixer to cream the 1/2 cup of butter and sugar together until light and fluffy. Add the eggs, 1 at a time. Stir in the mashed bananas, sour cream and vanilla and beat until just combined. Add the dry ingredients and gently stir in pecans. Sweet Potato Hash Recipe : Patrick and Gina Neely. Mashed Sweet Potato Casserole Topped with Caramelized Bananas Recipe. Mashed Sweet Potatoes with Orange Essence Recipe : Ellie Krieger.

Homemade Cannoli Recipe : Alex Guarnaschelli. Almond and Lemon Biscotti Dipped in White Chocolate Recipe : Giada De Laurentiis. Preheat the oven to 325 degrees F.Line a large baking sheet with parchment paper. In a large bowl, whisk together the flour, cornmeal, baking powder, and salt.In another large bowl, beat the sugar and eggs with an electric mixture until pale yellow, about 3 minutes. Mix in the lemon zest and then the flour, and beat until just blended. (The dough will be sticky). Stir in the almonds. Let the dough rest for 5 minutes.Divide the dough evenly into 2 equal mounds and place on the prepared baking sheet.

Pour the simple-syrup over them, toss to coat and let steep for 5 minutes. Strain and reserve the syrup.Cream the butter, sugar and almond paste together in the bowl of an electric mixer fitted with a paddle at low speed, occasionally scraping down the sides of the bowl with a rubber spatula. Divine Divinity Fudge Recipe : Emeril Lagasse. Directions Beat the egg whites with an electric mixer until stiff.