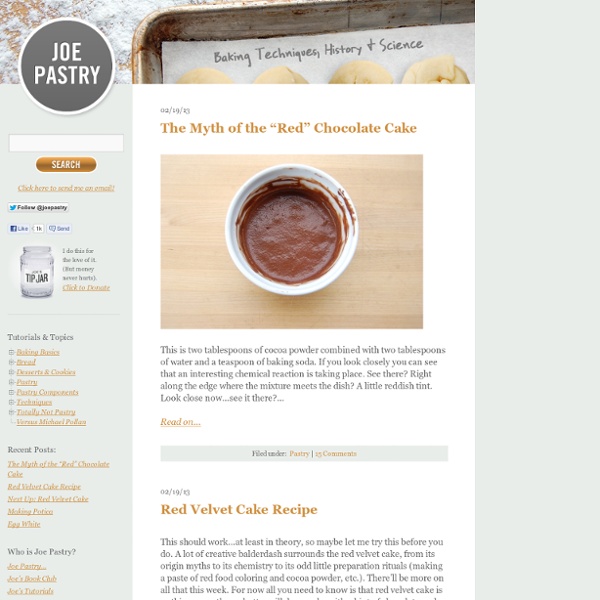 Back Monday It’s Holy Week and there’s lots to do: services to attend, prayers to say, stuff to bake, plastic eggs to fill with candy. But Easter or no, it promises to be a lovely spring weekend here in the hemisphere…I hope you have a splendid one! Making Bee Sting Cake (Bienenstich) The whole thing disappeared off my platter in about 35 seconds yesterday, if you need an indication of how your friends will receive your bee sting cake. I went out to deliver a slice to a next-door neighbor and shortly two or three others emerged out of doorways and cars.

Easy Buttery Pie Dough Recipe You know I’m not a baker. I think I’ve mentioned that before. Well, pie dough used to be one of those “baker” things that freaked me out. It doesn’t anymore because I figured out that using my food processor removes my biggest fear — overworking the dough. Now, there are gazillions of pie dough recipes on the internet and in cookbooks (including one of my own). This recipe, adapted from my own The Great Ranch Cookbook Go ahead, take a shot of salad dressing. I got my first taste of this salad dressing when a dear friend brought it over with a meal she had made for my crew right after Nola was born. From the moment the heavenly concoction hit my lips, I wanted to drink it right out of it’s re-purposed glass bottle. Since asking begging her for the recipe, I’ve probably made it weekly. And I make it for everyone I know. If I love you, I will bring you this dressing.

Milky Vietnamese Coffee Popsicles Contributor post by Lyndsay Sung of Coco Cake Land Who else is a Vietnamese iced coffee fan? Thick, sweet, lightly caramel coloured sweetened condensed milk with dark roast coffee poured over ice - heaven! These milky Vietnamese coffee popsicles might just become your new favourite - creamy, icy and milky sweet and the easiest assembly ever, thanks to instant coffee granules! If you have a 1 litre (4 cup) liquid measuring cup, this will be even easier.

Honeyed Pears in Puff Pastry - StumbleUpon Poaching fruit is one of my favorite things to do when cold weather arrives. It's so warming to stand over a boiling pot of fragrant spices and lose yourself in thought. When I made these, I couldn't help but daydream as I stirred; if I were a pear... I wouldn't want to spend my days on the shelf of a cold produce department. I'd want to be taken to a warm home and placed in a jacuzzi of honey and spices. I'd want to be wrapped in an extra long puff pastry scarf and baked until golden and toasty.

Oat and Rosemary Cheese Biscuits After a busy week I've been hit by an unexpected cold and was forced to take it easy this weekend. I've taken naps, done a couple of light strolls on the beach and enjoyed some much needed R&R. These oat and rosemary cheese biscuits are perfect for a quiet weekend. Chocolate Peanut Butter Bars There is a deli near my house that makes the most amazing chocolate peanut butter bars. I have been trying to come up with a copycat version of them for some time & this recipe is pretty much it. I thought they would be a great dessert to make for the bake sale, as chocolate/peanut butter desserts are very popular & these are super simple & don't require any baking! I cut them into 2" bars for the sale, but 1" bite-sized bars would be ideal, as they are very rich.They sold out faster then anything else at the sale...I wish I had made more.

(mis)Fortune Cookies: Matcha-Orange Flower and Brown Butter A good deal of ink has been spilt chronicling the trials and tribulations of being a graduate student. And with good reason, since said trials are many: the long hours, the miniscule (if any) pay, the annoying ridicule we're subject to from grumpy old professors who don't see the point of the modern probability theory revolution .... ahem and eye roll. And we graduate students undertake all of this knowing full well that only very few of us will make it into academia in the long run (we just really, really hope it's us!). Part of what makes it all live-able, however, is the fact that we are also terribly good at laughing at ourselves and at our own predicaments. Take PhD comics, for instance, or #whatshouldwecallgradschool.

How to Make Peanut Butter S'Mores Turnovers Peanut Butter- S’Mores Turnovers I’m not much of a camper. My husband often takes my son on camping trips, and I happily stay behind and thank the gods for our bug-free house, cozy bed and well-stocked kitchen. One Bowl Cinnamon, Apple + Hazelnut Cake This is the kind of cake I need with a cup of good tea (or two) every afternoon. I definitely prefer a fruity spiced cake as opposed to chocolate fudge varieties. Just more to it I guess, plus the taste seems to stick around a wee bit longer, but ultimately I find it more satisfying and it’s usually spiced with yummy cinnamon (major addiction) and nutmeg.

Low Fat Chocolate Chip Cookies It's hard to believe these chocolate chip cookies are low fat. By using half the normal amount of butter, and substituting an egg white for a whole egg, these make a wonderful and almost guilt-free indulgence. The chocolate flavor is enhanced by using cocoa powder as well as the chocolate chips.

Breaking Bad - blue meth candy - Lollies, Candy and Bonbons I’m sure most of you will know who I’m talking about when I mention Walter White, aka Heisenberg. The TV show Breaking Bad, in which the meek chemistry teacher Walter White transforms himself into meth cook king pin Heisenberg, is drawing in the crowds to tune in to AMC and to visit the city of Albuquerque in the US, where the show is based. The Candy Lady, Debbie Ball, who was initially asked to make the candy ‘meth’ crystals that were used as props in seasons 1 and 2 of the show, is now selling the little blue candy filled baggies at her candy store for $1 each. Don’t worry if you can’t get down to Albuquerque, you can buy ready-bagged candy from various ebay and etsy stores. Endless fun to be had – like sprinkling the crystals on iced donuts like Aaron Paul (Jesse Pinkman) has here. Thinking about breaking bad and cooking up some meth candy yourself?

How To Make Croissants [Chocolate Croissants, Pumpkin Spice Croissants, and Cinnamon Sugar Croissants] I hope you’re ready to see a billion underexposed photos of the same exact dough over and over and over again. Please say yes, because you will be rewarded with this. This was a… project. To say the least. I have been dying to try homemade croissants for ages, but after mention of them when I made almond joy scones, I could hardly wait. I have a very nostalgic reason for loving croissants: since I was young, each summer my grandma would always pick up a croissant from the Bread Box Bakery in Boyne City.