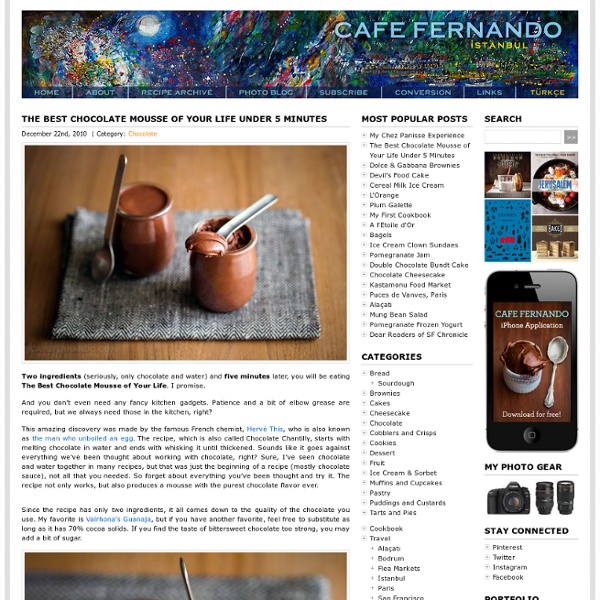 December 22nd, 2010 | Category: Chocolate Two ingredients (seriously, only chocolate and water) and five minutes later, you will be eating The Best Chocolate Mousse of Your Life. I promise. And you don’t even need any fancy kitchen gadgets. Patience and a bit of elbow grease are required, but we always need those in the kitchen, right? This amazing discovery was made by the famous French chemist, Hervé This, who is also known as the man who unboiled an egg. Since the recipe has only two ingredients, it all comes down to the quality of the chocolate you use. Don’t take this as a mousse recipe only. You can also flavor it with spices like cinnamon or cayenne pepper or add a tablespoon of liquor like Grand Marnier, Chartreuse or Tia Maria. Or boil the water first, take off heat, place a couple of Earl Grey tea bags, let infuse and then use it as your liquid. The most important part of the recipe is achieving the right consistency. Wishing everyone a Merry Christmas and a Happy New Year!

Tiger Cake (Marble Cake) I had a chance to bake some traditional cakes (knowing they'd get eaten) whilst my parents were visiting us the other week. Tiger cake, as it is known in Finland, didn't used to be my favourite growing up, but I've finally discovered the joy of these simple 'coffee cakes' Finns love so much. It's these traditional recipes I'm most fond of: basic ingredients and no fancy machinery needed. Tiger Cake 200g butter (organic) 160g raw caster sugar

10 Easy Kitchen Extracts to Make at Home There is no need to buy vanilla extract, or most baking extracts for that matter, because a lot of them can be made at home. It may sound complicated and unnecessary to do this, but I can assure you it is much easier than you think. Most of the time making extracts entails steeping the flavoring ingredients in a liquor or sugar. Dijon Chicken Club Sandwiches By the time I get home from work, I often don't feel like cooking a big meal. But if I've done some of the prep work in advance, it becomes really easy. This is pretty much my weekday plan. If I didn't do this, we would end up eating out a lot more often, or making frozen pizzas.

Nutella-Stuffed Brown Butter + Sea Salt Chocolate Chip Cookies {my favorite cookie ever} Sep 06 I know that the title of this recipe is a little absurd and dramatic, but I couldn’t think of any other way to present this cookie to you. Quite frankly, this is a chocolate chip cookie that will change your life. Updated: Here’s a fun video I made with Gold Medal Flour. Pâte à Choux Recipe (Cream Puff Pastry) Thursday, November 17, 2011 Simple Pate a Choux and Cheese Puffs Update 11/17/11 I’m re-posting this recipe from 2009 – it’s perfect for Thanksgiving dinner – 3-ingredient recipe with impressive results. Add cheese to make Cheese Puffs – gougeres!

Marzipan chocolate sushi I might be a few years late making candy sushi, but it doesn't make it any less fun. I think these would make an eye-catching dessert at a dinner party. Yes they are a bit fiddly, but they are definitely worth the trouble! Without any further ado, here's the recipe I found in an old Anna magazine (Finnish equivalent to Woman's Day). Marzipan chocolate sushi(makes 24 pieces) 150g marzipan

Steak au Poivre - The Showstopper I have a comment on this comment, then I have a comment for the OP. To Amy: Removing to foil is simply a way to keep the steaks warm whilst resting (FOR 5 MINUTES AT LEAST… ALWAYYYS!). When the OP says remove to foil, he/she doesn’t mean to wrap them tightly. Beer Battered Onion Rings One day, months ago, after Ben and I were watching a show on the Food Network about fried foods, Ben had asked me to recreate the beer battered onion rings that were featured. Knowing I’m not one to frequently bust out a vat of oil to “waste” on frying, I quickly filed his request in the very back of my mind. No, seriously, the very back shelf of my brain that is probably full of dust and other undesirable recipe requests.

Slow Cooker Gooey Chocolate Cake I’m meeting a new friend for lunch today. And an old friend for line-dancing tonight. And I’m feeling rather spoiled about it all. I mean, moms shouldn’t have TWO social events on the calendar for the same day, should we? Cinnamon Toast Rolls The USDA released its new food pyramid the other day (which is actually a plate now instead of a pyramid), and I am sorely disappointed to report that cinnamon rolls did not appear anywhere on that plate. I think by now most of us know what should be on our dinner plate in terms of healthy, well-rounded nutrient-laden meals, but it is my considered opinion that our breakfast plate should include cinnamon rolls now and then. And not just any cinnamon roll, mind you, but how ‘bout a homemade cinnamon roll hybrid that is a cross between a cinnamon roll and cinnamon toast, is super easy to make and gosh darn delicious. In honor of their ancestry, I call these little gems cinnamon toast rolls, and here’s all you need to make them…

Dark chocolate orange cake When I make a chocolate cake I like to use real chocolate, that is dark chocolate, not chocolate powder. This cake is yet another proof of my favourite combination: dark chocolate and orange.The top is fragile and flaky, but the inside is soft and intensely delicious. The original recipe asked for Cointreau and I know it would have given the cake the most magnificent flavour, but substituting it with orange juice like I did was not a bad choice.