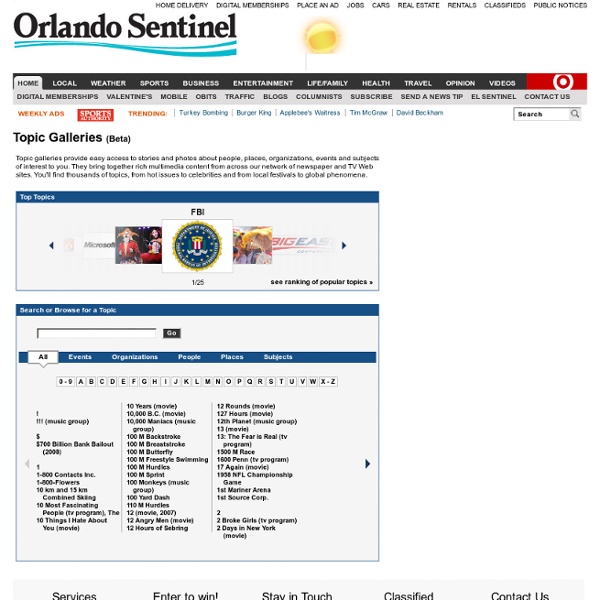 Pro wrestlers no longer with us Former professional wrestler The Ultimate Warrior died Tuesday night at the age of 54, becoming the third pro wrestler to pass away this year. The Ultimate Warrior, who legally changed his name to Warrior but was born Jim Hellwig, joins Big Daddy V... The Ultimate Warrior dead at 54 One of the most iconic and best known wrestlers of the past 25 years The Ultimate Warrior — who legally changed him name to Warrior and was born Jim Hellwig — passed away on Tuesday night. Pro wrestlers no longer with us Hit-and-run truck sought in Brevard death The driver of this pickup towing a trailer late Sunday in Cocoa is sought for questioning by the Florida Highway Patrol. Vampires, nudists, snakes: Nobody does wacky like Florida Last week, news broke that a congressional candidate in Gainesville had a secret pastime: impersonating vampires. Gardiner's Coast to Coast bike trail becomes trade bait Lake Brantley vs. It could go one inning. If you go: Orlando Predators vs.

Massachusetts tornado survivors grieve losses Tina Susman AP Photo/Elise AmendolaJoe Yarbrough, 12, right, tosses a jacket to his mom, Laura, as they salvage belongings from their home in Monson, Mass. Thursday, June 2, 2011, one day after it was leveled by a tornado. Springfield, Mass. _This isn't Missouri, where TV news shows the wreckage left by the tornado that roared through Joplin. It isn't Alabama, where a deadly twister tore through Tuscaloosa just five weeks ago. Few of the stunned onlookers snapping pictures of the spectacle took notice of Talley, leaving the tiny 73-year-old woman with the cane to quietly grieve for the yellow house reduced to ruins by a tornado that left a swath of Massachusetts in shambles. "It was wonderful. At least three tornadoes tore through the region Wednesday, killing at least three people, injuring dozens, and blindsiding residents who thought blizzards were the worst punishment Mother Nature could mete out in this bucolic region. "That's why we always say we love New England.

VOTE NOW: Our Pin Collection "Went Disney" | WDW Radio - Your Walt Disney World Information Station by Lou Mongello These days, if you want to prove to someone your Disney fandom, evidence of your devotion can be found in a simple pin.Â Disney pin collecting is so popular that we knew we needed to acknowledge this form of Disney passion with a contest.Â We have eleven amazing entries from members of the WDW Radio family who are clearly passionate about pin collecting.Â Please read their stories and look at their pictures… and then let us know which pin collection you think did the most magical job of “going Disney.”Â Voting will be open through Tuesday February 7 at 10pm EST. Entry #1: Linda A: “We have been enjoying Disney pins since pin trading began years ago. But since there are so many beautifully designed pins from which to choose- we realized early on we had to choose a theme for this obsession! Then came the dilemma of what to do with our prized pins once we got home. These little pieces of art deserve to be on display!! We enjoy starting each day (and every trip down the stairs!) Have fun!

Greening The Ghetto - News Markets Executive Forum 7 traits that separate resilient entrepreneurs from those who just walk away in defeat by Entrepreneurs' Organization Before you start reading this article, take a moment to think about the people you know really well. I recently attended a football game with a few buddies, one of whom was a former EO member named Andre. 5 minutes ago Innovation Students' heart-healing nanotechnology startup vies for $1M by Molly Ryan NanoLinea, a medical device startup based out of Rice University, is hoping its technology stands out at the Rice Business Plan Competition. As one of three Houston companies competing at the April 10-12 event, NanoLinea has the chance to win more than $1 million in prizes. While working on their PhDs with Matteo Pasquali, a chemical and bioengineering professor, three Rice students came to ... 42 minutes ago Hot Shots Bitcoin Congressman unveils legislation to redefine cryptocurrency by Michael del Castillo "This is a nascent industry," said Stockman in a statment.

knoxnews Storms scenes from downtown Knoxville A series of intense storm cells brought multiple tornadoes and damaging hail and lightning across much of East Tennessee on Wednesday, prompting repeated tornado warnings being issued for Knox and surrounding counties throughout the evening. The National Weather Service confirmed two tornados struck near Cleveland, Tenn., including an EF-2 with winds up to 120 mph that injured one person and destroyed three mobile homes along Mt. Zion Road about five miles northwest of town Wednesday morning. An EF-1, with 90 mph winds, also landed about a mile west of Cleveland at 3:36 p.m., although no injuries or serious property damage was reported. A possible third touchdown also was reported, but unconfirmed, near Etowah in McMinn County later Wednesday. A woman was killed when a tree fell on her trailer in Chattanooga. Tops were snapped off trees and insulation and metal roof panels littered the ground.

dave's word The Particle Zoo: Subatomic Particle plushies I love LOLcats. I love physics. Mix the two together and I CAN'T STAND IT! 2010 Haiti earthquake The 2010 Haiti earthquake was a catastrophic magnitude 7.0 Mw earthquake, with an epicenter near the town of Léogâne (Ouest Department), approximately 25 kilometres (16 mi) west of Port-au-Prince, Haiti's capital. The earthquake occurred at 16:53 local time (21:53 UTC) on Tuesday, 12 January 2010.[7][8] By 24 January, at least 52 aftershocks measuring 4.5 or greater had been recorded.[9] An estimated three million people were affected by the quake.[10] Death toll estimates range from 100,000[6] to 159,000[5] to Haitian government figures from 220,000[11][12] to 316,000 that have been widely characterized as deliberately inflated by the Haitian government.[4] The government of Haiti estimated that 250,000 residences and 30,000 commercial buildings had collapsed or were severely damaged.[13] Many countries responded to appeals for humanitarian aid, pledging funds and dispatching rescue and medical teams, engineers and support personnel. Background Geology USGS intensity map Aftershocks Tsunami

Magic Memories and You near the end of One More Disney Day #Disney24 #fb Unknown title Book of Thoth is a name given to many ancient Egyptian texts supposed to have been written by Thoth, the Egyptian god of writing and knowledge. They include a text that is known and has been translated, many texts that were claimed to exist by ancient authors, and a magical book that appears in an Egyptian work of fiction. Texts that are known or claimed to exist[edit] The Egyptians stored many texts, on a wide range of subjects, in "Houses of Life", the libraries contained within temple complexes. As Thoth was the god of knowledge, many of these texts were claimed to be his work.[1] The Egyptian historian Manetho claimed that Thoth wrote 36,525 books.[2] The church father Clement of Alexandria, in the sixth book of his work Stromata, mentions forty-two books used by Egyptian priests that he says contain "the whole philosophy of the Egyptians". Fictional book[edit] The fictional Book of Thoth appears in an ancient Egyptian story from the Ptolemaic period. In popular culture[edit]

U.S. Coast Guard & Hurricane Katrina, Historical Index Historical Index Overview Hurricane Katrina was one of the worst natural disasters to ever strike the United States. Efforts to document the service's efforts during Katrina began almost immediately after the storm struck the Louisiana coast. Our thanks to all Coast Guardsmen who assisted KART and the Historian's Office in preserving the Service's experiences and memories during Katrina operations. Further Information: Katrina Timeline Katrina: A Narrative History of the Coast Guard's Response Katrina Oral Histories KART (Katrina Archives & Records Team): Authorizing Message KART: An Overview "Allen's Wrench" an article about Vice Admiral Thad Allen & Hurricane Katrina by James Kitfield for the National Journal with photos by FEMA as published in the 2005 special edition of Coast Guard Magazine.

11 Ways to Cure Someday Syndrome | zen habits Editor’s note: This is a guest post from Alex Fayle of the Someday Syndrome blog. Someday Syndrome: not doing what you want to because you don’t know what it is, because you’re procrastinating about it, or because you have too much stuff getting in your way. Everyone suffers from Someday Syndrome at some point in their lives, often catching it repeatedly. For me, most recently, I’d been saying that I really should give running a try without doing anything about it. You probably have something similar going on in your life – a project, a task, a goal – that you just haven’t got around to doing yet. I could quote Nike and say: Just Do It, but if it were that simple Someday Syndrome wouldn’t exist. I decided that here had to be an easier way than waiting for pain to push me into getting over myself and getting on with my goals. 1. Maybe you’re not doing something because in reality, it doesn’t fit with who you are. 2. 3. 4. I have a goal of running 20K next November. 5. 6. 7. 8. 9. 10. 11.