If a piece of equipment breaks in a hospital and there’s no one to fix it, does it make a sound? Dr Harry Aigeeleng, an anaesthetist in Papua New Guinea, shows his hospital’s equipment graveyard. 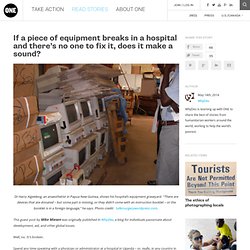 “There are devices that are donated – but some part is missing, or they didn’t come with an instruction booklet – or the booklet is in a foreign language,” he says. Photo credit: Safersurgerywordpress.com. HOW YOU CAN HELP. 'Disaster after the disaster' MOUNT LAUREL, N.J. 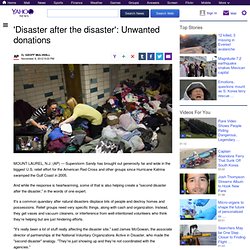 (AP) — Superstorm Sandy has brought out generosity far and wide in the biggest U.S. relief effort for the American Red Cross and other groups since Hurricane Katrina swamped the Gulf Coast in 2005. And while the response is heartwarming, some of that is also helping create a "second disaster after the disaster," in the words of one expert. It's a common quandary after natural disasters displace lots of people and destroy homes and possessions. Relief groups need very specific things, along with cash and organization. Instead, they get vases and vacuum cleaners, or interference from well-intentioned volunteers who think they're helping but are just hindering efforts.

"It's really been a lot of stuff really affecting the disaster site," said James McGowan, the associate director of partnerships at the National Voluntary Organizations Active in Disaster, who made the "second disaster" analogy. View gallery "They have a lot of everything; they need food. Tornado #SWEDOW. The #SWEDOW (Stuff WE DOn’t Want) debate has surfaced a bunch of times on this site, and far moreso across the aid blogosphere over the last few years- with a particular crescendo around the Million T-Shirts conversation a while back. 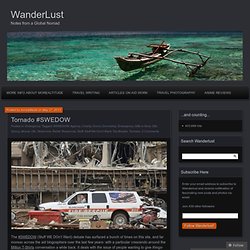 It deals with the issue of people wanting to give things- t-shirts, shoes, underpants, food, footballs- to disaster response agencies rather than cash. For a whole bunch of reasons, this is generally unhelpful. Stuff costs huge amounts of money to ship, store, sort, distribute and track. Humanitarian Aid. Guide to In-Kind Giving - Emergencies. In-Kind Donations UNHCR. Humanitarian Giving guide. Guide to Donating Items. At Charity Navigator we receive questions every day from generous donors looking to donate noncash items to a worthy cause. 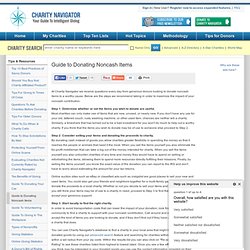 Below are the steps we recommend taking in order to maximize the impact of your noncash contribution. Step 1: Determine whether or not the items you wish to donate are useful. Most charities can only make use of items that are new, unused, or nearly new. If you don't have any use for your old, tattered couch, rusty washing machine, or other used item, chances are neither will a charity. Similarly, a timeshare that has turned out to be a bad investment for you won't do much to help out a worthy charity. Step 2: Consider selling your items and donating the proceeds to charity.By donating cash instead of goods you allow charities greater flexibility in spending the money so that it reaches the people or animals that need it the most. Online auction sites such as eBay or classified ads such as craigslist are good places to sell your new and used items. Considerations before donating in-kind goods like bottled water in an emergency situation.

“Sending donated goods oversees is an appealing idea because it makes you feel like you’re really helping while at the same time recycling things that are no longer of any use to you,” states Saundra Schimmelfennig, a co-founder of the Disaster Tracking Recovery Assistance Center, an NGO that works on aid coordination and ensuring better aid distribution. 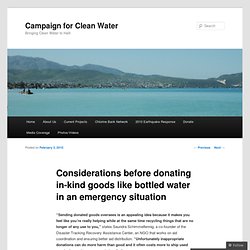 “Unfortunately inappropriate donations can do more harm than good and it often costs more to ship used goods than to buy new goods locally.” __________ While many people have given in-kind donations of food, clothes, medicines, and bottled water for Haiti earthquake relief, this often creates a logistical quagmire. The Haitian embassy’s doors in Washington, D.C., have been recently blocked by donated goods.

Although this clearly demonstrates that the public wants to help, in most cases there is little forethought in considering how the goods will actually be transported to Haiti. “Some people get a little miffed by it. 1.

Computers. Clothes. Ambulance Donations. Stop praising people for giving “stuff” “We Always Give What We Have, Not What People Need” In-kind donations who benefits? When a disaster strikes and images of hungry and destitute women and children appear in the news, many feel compelled to help. 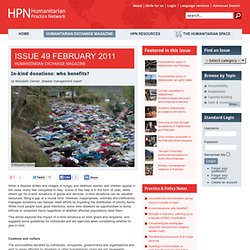 Some of this help is in the form of cash, while others opt for in-kind donations of goods and services. In-kind donations can be valuable resources, filling a gap at a crucial time. However, inappropriate, untimely and inefficiently managed donations can hamper relief efforts by impeding the distribution of priority items. While most people have good intentions, some view disasters as opportunities to dump leftover or unwanted items regardless of whether affected populations need them. This article explores the impact of in-kind donations on both givers and recipients, and suggests some guidelines for individuals and aid agencies when considering whether to give in kind. Customs and culture Irrelevant aid Even if an item is really needed, like clothing, it should still be appropriate. Costs Time Logistics Cash – often the better alternative The way forward [3] See.   Stuff: What is it good for? I do not normally jump on the SWEDOW bandwagon. 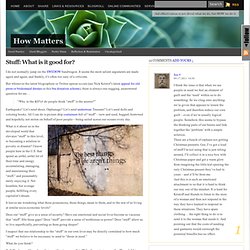 It seems the most salient arguments are made again and again, and frankly, it’s often too easy of a criticism. But whenever the latest blogosphere or Twitter uproar occurs (see Nick Kristof’s latest appeal for old prom or bridesmaid dresses or this bra donation scheme), there is always one nagging, unanswered question for me… “Why in the &$%# do people think “stuff” is the answer?” Earthquake? Let’s send shoes. An analysis of gifts-in-kind.