Web-based Instruction. Jan 16 2011 First #Selfie On Instagram. 2 Years Later: The First Instagram Photo. 2010 Photo by kevin. Micah : I am starting Follow Fridays. Chrismessina: how do you feel about using... Ericrice: ReTweet: jmalthus @spin Yes! Davidville. More than 100 million blogs will be online in 2007. 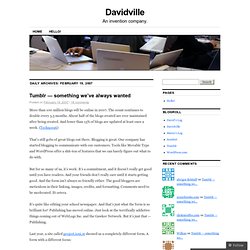 The count continues to double every 5.5 months. About half of the blogs created are ever maintained after being created. And fewer than 15% of blogs are updated at least once a week. (Technorati) That’s still gobs of great blogs out there. Rsa: @ buzz - you broke your thumb... The first-ever hashtag, @-reply and retweet, as Twitter users invented them. Twitter is pretty simple, but it started out even simpler. The 140-character messaging service launched on March 21, 2006 with no way to send a reply or retweet someone.

And it certainly didn’t have hashtags. Those peculiar conventions, which make Twitter both irresistible and confounding today, were invented by its users. After a while, the company picked up on each trend and adopted it as an official part of the service. 2006 Silicon Valley’s All Twttr. Dodgeball is so New York!

In Silicon Valley, its all Twttr! Twttr is a new mobile social networking application written by Noah Glass (and team), an Odeo-guy, a long time compadre of Blogger founder Ev Williams. (Twttr is a side project.) It is not a very complicated application – and which is what makes it so addictive and at the same time annoying.

21 mars, 2006 jack : just setting up my twttr... Who Made Google's Map Pin? 2000 Google images. You may think that the most important dress of the 21st century is that blue and black one we all lost our shit about in 2015, but it might actually be the green Versace number that Jennifer Lopez wore to the Grammys in 2000. 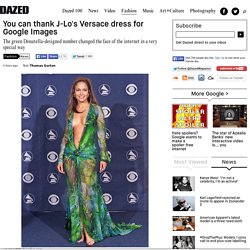 The ultra-revealing silk chiffon garment has gone down in fashion history – but it also, somewhat improbably, directly contributed to the birth of Google Images. In an article written for Project Syndicate, Google executive chairman Eric Schmidt said that the image search function was created after millions of people flocked to the internet to take a look at the Donatella-designed dress. "When Google was launched, people were amazed that they were able to find out about almost anything by typing just a few words into a computer," Schmidt said. "It was better than anything else, but not great by today's standards. 1998 Google! Google.stanford.edu Searching the Web has increasingly become a two-stage process--execute a search, then wade through the results trying to find what you're actually looking for. 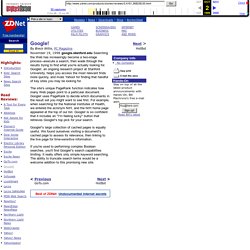 Google! , an ongoing research project at Stanford University, helps you access the most relevant finds more quickly, and rivals Yahoo! For finding that handful of key sites you may be looking for. The site's unique PageRank function indicates how many Web pages point to a particular document. Google! "People who don't like Comic Sans don't know anything about design"

Interview: ahead of his talk at London's V&A museum on Friday, typographer Vincent Connare talks to Dezeen about creating the typeface that designers love to hate. 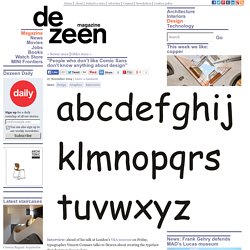 Vincent Connare was one of the early pioneers of digital typeface design, working on fonts for Agfa and Apple in the early 1990s before joining Microsoft, where he designed both the web-friendly Trebuchet font family and the now infamous Comic Sans MS. "It was important at Microsoft to show people how things could be done. The group back then were doing things five years or more ahead of everybody," Connare told Dezeen. "We were addressing issues with various types of screens and devices. The first version of Google, Facebook, YouTube and more (and what they can teach us about starting small) 6.5K Flares Filament.io 6.5K Flares × “The best things we know and love started as tiny things.” — Joel Gascoigne Buffer’s CEO, Joel, wrote a post not too long ago about the importance of starting small with new projects. 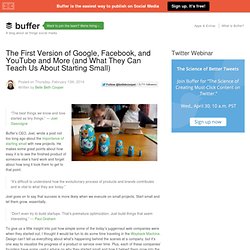 The First Photo on the Web. The first photographic image ever uploaded to the Web was a Photoshop disaster. 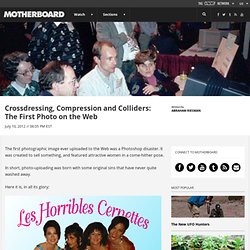 It was created to sell something, and featured attractive women in a come-hither pose. In short, photo-uploading was born with some original sins that have never quite washed away. Here it is, in all its glory: Next Wednesday, July 18th, the photograph at the center of that image — a homemade promotional shot for Les Horribles Cernettes, a comedy band based at the CERN laboratory near Geneva — will turn 20 years old. Despite the artifact’s world-historical significance, its full story has never been told. The Story of the First Photo on the Web. 1989 first website.

1987 GIF Creator, Steve Wilhite, Receives Lifetime Achievement Webby Award. 1982 Happy 30th birthday emoticon! :-) - News - Gadgets & Tech. Regardless of your view, as emoticons celebrate their 30th anniversary this month, it is accepted that they are here stay.

Their birth can be traced to the precise minute: 11:44am on 19 September 1982. At that moment, Professor Scott Fahlman, of Carnegie Mellon University in Pittsburgh, sent an email on an online electronic bulletin board that included the first use of the sideways smiley face: "I propose the following character sequence for joke markers: :-) Read it sideways. " More than anyone, he must take the credit – or the blame. Minitel Research Lab, USA.